Good LORD, What A Party 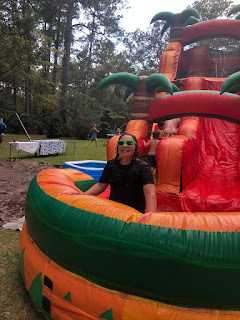 I am not as tired as I've ever been in my life but I am tired. Yesterday I put in a lot of hours and although August was a great boy and went to sleep as fast as turning out a light last night he did wake up a little before seven this morning. It was still pitch dark outside and his grandfather and I both told him that he needed to get in our bed and go back to sleep because it wasn't DAYTIME YET! He tried to convince Boppy that they could indeed watch TV in the dark but Boppy said no, it was still sleeping time.
So he got in the bed and I hugged him up tight and he let me which was worth waking up earlier than I wanted because he's not a cuddly boy for the most part. He kept twitching the curtain back to check the progress of the coming day and wiggling about and it felt not unlike cuddling a moving bag of sharp little bones but then I turned my back to him and he still stayed close and settled down for a bit although I don't think he ever went back to sleep.
Finally Boppy got up and let me drift back to sleep for a few minutes and then I got up and eventually pancakes were on the table and were eaten with gusto.
After breakfast the boy and I went to take the trash and go to the post office which, as you may know, is a great treat for August because he gets to sit in the booster seat instead of the car seat for the long block of travel to the trash depot. He reads a book that I keep in the back seat just for that purpose. He goes into the post office with me and today he even held the door open for me.
He is truly a grand boy.
Vergil came out with Levon to do a short project with Mr. Moon and then took both boys over to Lily's to help get things ready for the party and Mr. Moon and I sort of collapsed until realizing we couldn't afford to collapse and we got up and got ready to take things over to the party ourselves. Which we did.
These parties can be anxiety-producing for me. There are always so many people and although they are people I love, it's still stressful. I wish it weren't, but it is. And it was hot. So, so hot. But when we got there, kids and Vergil and Jason were already going down the huge water slide and having the time of their lives and I helped Lily and Jessie and Lauren set up the crock pots and Hank and Rachel got there and plugged in their crockpot and things got put on the table and kids began arriving and grown-ups too. There was a weird glitch in things in that an accident occurred on the road right where the turn-off is for Lily's road and so Billy and Shayla and May and Michael and some other folks couldn't get down the road but that didn't last too long.
And so the party people all gathered and the kids played on the water slide and in the little pool set up beside it and there was jocularity and grazing on chips and all sorts of delicious homemade salsas and chatting and hugging.
It was good to catch up with people. Billy's sister was there with her husband and their three children and I honest to god asked Kelly, Billy's sister, who that girl was that they'd brought with them.
"That's Adah!" she said.
"No fucking way!" I said.
I still think of Adah as a tiny child about three feet tall and now she's this grown-up woman-child already in high school who was wearing her hair in a sort of Bridget Bardot style and honestly, I was shocked.
And of course it was great to see Billy and Shayla and Waylon whom I hadn't seen in forever. Oh, how I love those people.
Honestly, it was a great party all the way around. There was even a snow cone machine! And when the taco-time came around, it was truly a gourmet joy.
Here's some pictures. 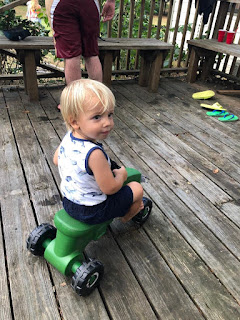 Levon on a tractor. I started fanning him with my dollar store fan and he liked it so much that he wanted to sit on the bench beside me so that I could fan him even better. He was happy with this for a long time. When I'd quit he'd say, "Do again." And so I would. 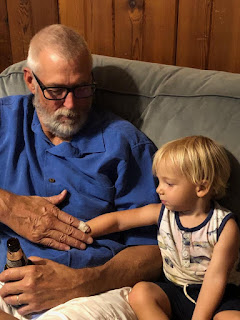 The littlest guy with his Boppy. They were inside in the AC watching a football game. Levon, like his brother, adores that man. 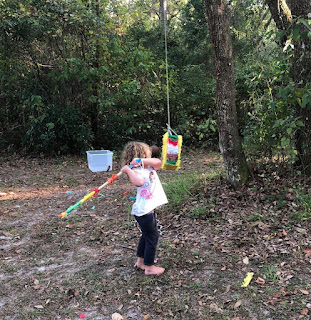 Maggie's turn at the pinata! Actually, there were two. A donkey and a taco. Hank and Rachel had brought them. Remember when I said that no one knows how to make as much fun as Hank? This is another example. He and Rachel had filled the pinatas with candy and little toys and the children were thrilled. I had no idea there were so many kids there until they lined up to whack the things. 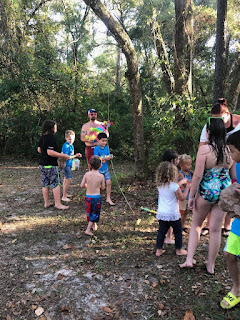 As soon as the pinatas were broken and the candy and toys scattered, the children rushed to pick up the treasures and they stashed them in the bags that Lily provided. August was so very, very proud of his haul. It was like Halloween, all over again.

And then came the birthday cakes. There were a total of seven people celebrating their birthdays. Here are four of them, plus Levon. 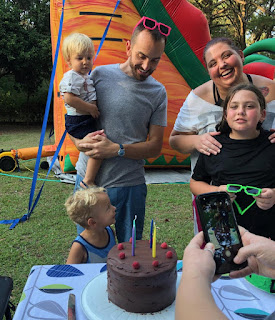 That's the dark chocolate stout cake that Jessie made for her guys. It is an incredible cake. Lily had made a Mine Craft cake for Owen and Lauren had decorated it. And Billy's mother had made him a pound cake. Jason's mama made ice cream.
Yep. Pretty much perfect. 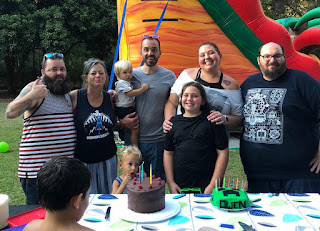 Here are all of the birthday people. Billy, Shayla, August, Vergil, Owen, Lily, and Jason's brother Chris. We sang them happy birthday. We cheered. We celebrated.
As it was all happening I looked at my husband and said, "If you hadn't asked me to dance that night, none of this would be happening."
And that's true. Of course we had nothing to do with the birth of Billy and Shayla or Vergil or Chris but if Lily hadn't been born, there certainly would not have been a party at her house today.
It was pretty cool. And a bit mind-blowing.

Mr. Moon and I left before the presents were unwrapped although we did see Maggie unwrap the little present I got her. I found her and August some tiny flashlights that you can project film images on the wall of mermaids. I hated the thought of Maggie getting no presents at all. She was so happy. "You my best Mermer!" she kept saying, hugging me hard.
"And you're my best Maggie," I told her every time.

And then Mr. Moon and I came on home, exhausted but agreeing that it had been a very fine party. I just got this picture from Rachel who said that it was the best picture she got. 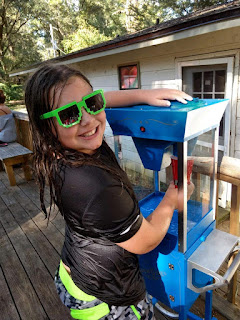 I believe this pretty much sums up how Owen felt about it.

And here's my favorite photo that I got. 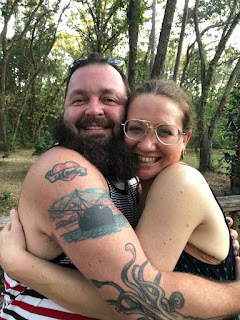 So there you go. I feel a little bit guilty about leaving Lily with the huge chore of cleaning everything up but I know that she'll have help. I think of all of the years of birthday parties I gave (although none so grand as this one) and how exhausting it all was and I feel somewhat justified in just being the grandmother and kissing everyone good-bye and leaving.

I want to add two things- it would appear that no one was truly hurt in the accident that held up people getting to the party and I am thankful for that, as were we all.
Also, the person we know who is on the jury for the trial that's happening now is, in all actuality, being paid by her employer for her time spent doing her civic duty. So she's fine. She was at the party and of course she could not say a thing but she she says that when it's all over, she can't wait to tell us everything.
We can't wait to hear it all.
If you are curious, there's a podcast about the case which involved a murder. You can read about that and find out how to access it here.
Our friend never listened to the podcast although almost everyone else I know around here has. The murder occurred a few streets over from a house I used to live in. The house where Lily was born, in fact.

Okay. Birthday week has officially and royally and completely and utterly been celebrated.

I may do absolutely nothing tomorrow.

That was a lot of adverbs. I apologize.