Life On Earth As A Human: Possible Trigger Warning 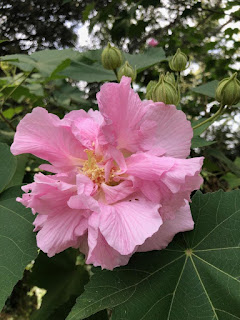 Lord, I woke up sore this morning.
"I need a massage!" I thought.
Well, actually, it took me a while to formulate that thought. But I knew I was sore right away. That massage therapist worked my muscle attachments and worked 'em good!
Mr. Moon had already taken off for Tennessee when I got up. He kissed me good-bye around seven and if I were a good wife I would have gotten up early and made him a hearty breakfast but that's what they make Waffle Houses for so I just went back to sleep.

I did take a walk today. It was so much cooler and drier which made it much more tolerable. I didn't walk very fast but I did it and I took the picture of that Hibiscus Mutabilis which we sadly call Confederate Rose in my neighbor's yard. Well, to be accurate I took the picture from the church's yard next door but the tree is in my neighbor's yard. I have one too but it gets too much shade, as all of my plants do and it won't be blooming for awhile. I always call this flower the prom queen of flowers because- well, just look at it. They make me think of the flowers that my best friend Lucille and I used to make with pink Kleenex and a bobbie pin. I bet I could still make one, too.
On my way back home on my walk I realized that some neighbors have acquired a new piglet. This is the house where they have the yappy dogs. At this point, the pig isn't much bigger than the dogs but it will be. Trust me. 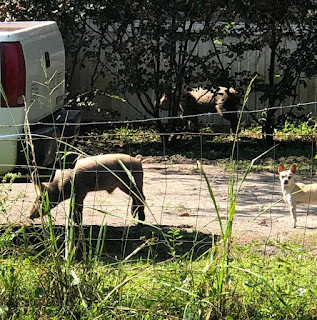 As I walked past, the little dogs came to the gate and barked at me and the pig ran to the gate and oinked at me. It already thinks it's a guard pig.
Maybe it is.
It's pretty cute.

Jessie texted and asked if I'd like her to bring the boys out after she picked up August at school. I answered, "Of course!"
And so she did.
We all piled on my bed and read books. Levon spent quite a bit of time nursing while holding his tractor book and Jessie actually fell asleep for a few moments while that was going on. Bless her mama-heart and her tired mama-bones. August was in a merry mood and we read quite a few books and stories. Coincidentally, one of the books he picked out was our Pig Tales book which has lots of stories and poems about pigs in it. "That's my favorite!" he'd say about each story. "That's my favorite too!"
He knows which story is MY favorite but it's not one of his favorites so we didn't read that one.
Sigh. I just love Johnny Squelchnose. 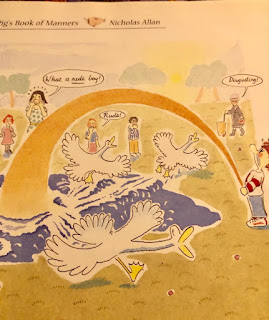 I've always been attracted to the bad boys. 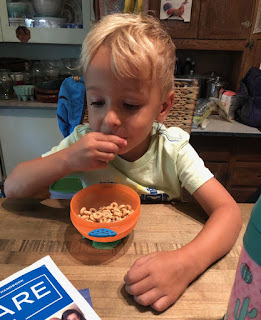 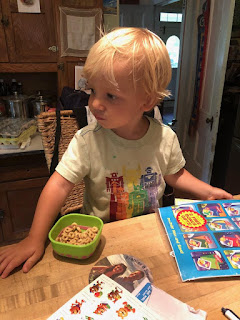 We also had some popcorn a little later on. Kids are an excellent excuse to eat snacks.

Eventually Jessie decided it was time to take the kidlings home. We'd put the hallway-length alphabet puzzle together and Levon had pushed the babies in the carriage for a good long time. There was even a little bit of TV despite the fact that Mr. Moon wasn't here.

So it was a perfectly lovely afternoon and now I've finished watching Part 2 of Leaving Neverland and it gave me a lot to think about. The final bit of it was about the mothers who had allowed the boys who are the subjects of the film to spend endless nights alone with Michael in his bed. Now let me say this- where were the fathers?
One, yes, was in Australia. His wife left him and took her son and her daughter to LA because Michael Jackson had begged them to come and live there. This was when her son was Michael's boy de jour. And that father had mental health issues and eventually he killed himself.
So there is that.
The other father was in LA as far as I know but as in both cases- the mothers had taken over the situation and Michael seemed to have courted them, as I said, and given them reason to believe that he loved them as much as he loved their children (but all in a perfectly platonic way, of course) and there were gifts and travel and adventures involved. Also a house loan which ended up being a gift as well. But goddam! That father should have stepped up and said, "Nah. This ain't happening," from the very start.
Of course neither father was interviewed for the film. And both of the mothers are adamant that they had NO IDEA IN THE WORLD that Michael Jackson was molesting their sons. As I think I said before though, even if he hadn't been, there was just absolutely nothing in the world okay about letting their little boys sleep in the same bed with a grown man.
And of course both of the men, now grown up and who finally, after years of depression, anxiety, and all sorts of horrible dysfunction and becoming fathers to little boys themselves, have very mixed feelings about their mothers. And the mothers are filled with regret.

That whole thing about the non-protective parent is just one of the many, many horrible stinking layers of the entire child sexual abuse onion. And I realize that my perspective is slanted because my relationship with my mother grew worse and worse over the years after I told her about the abuse of her husband towards me and probably towards two of her other sons. To the point where when she died I was still not able to be there for her as lovingly and as gracefully as I should have been.
I am not proud of this.
But it's the truth.
Part of me knows without a doubt that any of my children could have been abused and there is the possibility that I would not have been aware of it. But I also know that I was constantly on the lookout. Whenever anyone came into our home I remained on high alert. And when I had boyfriends after my divorce, that constant wariness doubled and tripled.
Still- I know that it could have happened.
It was my greatest fear and to be honest, I still fear that one day one of my kids will come to me and say, "Mom, there's something I need to tell you."
But I will tell you this- if that day ever happens the first thing out of my mouth will not be, "I did not know."
It will be, "Oh my darling child. Please forgive me for not protecting you. I am so sorry."
And I think that's why my mother's and my relationship became so bad. She never, ever, was able to tell me that she was sorry that my abuse had happened on her watch. Her line of defense was:
1. I didn't know.
2. I had no idea.
3. How could I have known?

She did once say that she was sorry it had happened to me. But she never apologized for not protecting me.
And I suppose she simply couldn't do that. She also couldn't protect her children from what she quite obviously did know about how her husband treated her children in the light of day which was, in and of itself, horribly abusive. He was abusive towards her too. And things that should have prompted questions or concerns were never addressed. When she did finally divorce him it was after all of the children were grown and out of the house.
My mother did not have an easy life. My own biological father was a nightmare husband. His drinking was way beyond anything that was tolerable and she was able to leave him only when his behavior became obviously dangerous to the point of being life-threatening. I think that the shame she felt in the late fifties, early sixties, at being a divorced woman was so great that the idea of going through that again was more than she could face.

So, so many layers. The list of things that childhood sexual abuse steals from its victims is almost endless. Perhaps I should write a series of posts focusing on some of those.
But one of them is most definitely an inability to have a loving, trusting relationship with a non-protective parent. I am sure that many survivors work this out in a more loving and graceful way than I did. We all deal with the myriad of different aspects differently although there are similarities between all of us. And knowing that can be such a relief.
It's not just me.
It's not just you.

Well, night is coming upon us here in Lloyd. Church is happening next door. The cooler air feels as sweet as a tender promise whispered by a lover. Summer is not over but we have gotten a blessed, albeit brief reprieve.
My husband has made it safely to Tennessee and he said it was a beautiful drive.
I am alone but I am not lonely.