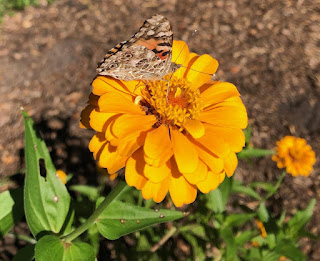 I think the butterfly is a common buckeye but I could be wrong. It surely was intent on sipping as much nectar as possible from that zinnia.

I have had a day of it. "It" being the blues, the saddies, the downs, the fuck-this-shit's, and also a little of the anxiety thrown in for good measure. I always tell myself when I feel this way when I wake up that it'll pass and might even become one of the best days or at least a good one.
And sometimes that happens.
Sometimes it doesn't.
I had to go into Tallahassee to pick up a birthday present for Owen that I'd had shipped. I'd had it sent to the Target near FSU by mistake and so I drove down that way for the first time in forever. Every time I do that I think of myself in 1982, twenty-eight years old with two kids, a divorce behind me, in nursing school. I'd have to get my babies up so early and get them to the preschool way the hell out west of town and then get to my own classes by eight in the morning. It was not easy. And leaving my children was a sort of hell although they loved that school, for the most part, and now my brother has worked there for thirty years or something crazy like that. It's a sweet place. But it was still hard. Everything was hard. Enrolling in school, figuring out childcare, finding a house in town to move into, re-learning to take notes and how to study. Nursing school's no joke and the sciences you have to take are daunting. All of this and having to deal with my ex. We had separated and even divorced but we weren't yet entirely cut asunder. I felt so much guilt for breaking up our family and I don't know that he felt much guilt about his part in the situation but he missed having a family too. I know he did. I think he even missed me. But eventually we worked that out for good and forever and there are a few stories involved there that even now I can't write about. And if I thought that leaving Hank and May at their preschool was hard, letting them go off with their father for two nights a week truly almost killed me. I had been a 24/7 mama to both of them since birth and the nights they'd spent away from me were few and far between. But I knew that no matter what, my children needed to be a part of their father's lives and he needed to be a part of theirs. That was just the truth of it. I refused to do what had been done to me (probably out of necessity) and have their father removed entirely from their existence. To deal with the pain of separation though I had to completely shut down a part of myself when they went to their Dad's in order not to go completely insane. And trust me- I was close enough to the border of that country to be able to spit across the divide between with ease.
In fact, I was straddling the world of sane and in- pretty precariously as it was. As might be expected I went through a terrible bout of depression and I shudder to think about what would have happened if I had not had my children to be responsible to and for.
But it all worked out! I made the best friends in nursing school and we studied and we partied and I had other friends who were so close to me and when I met Mr. Moon he really did not know what to do with all of the women in my life. He went through a lot of testing. And there was no way I was going to shove my ladies out the door just because a man had come along.
I made it clear that they were there first and he got it and eventually he was accepted by all of them and even loved dearly by some of them.
I have to say it was probably harder for him to jump that hurdle than it was for him to gain the trust of the children. He was so down home about everything and didn't push himself as a daddy but his own father had told him that if he was falling in love with a woman with children he was going to have to fall in love with those children too and he did.
Hank and May have a dad and they have a daddy Glen and they love and are loved by both.
And I graduated from nursing school and walked to get my diploma married, and pregnant with Lily. I studied for my licensing exams with a huge belly and managed to pass.
Still, this was not the "and they lived happily ever after" part. It took years for me to work out some of my crazy. Years and counseling and a survivor group and way more patience and tolerance from my husband than any man should have to put up with.

So I guess being down by the university brought all of that back a little bit and I tried to buy a rug at Ross but when I got to the check-out line I knew I just could not deal with it and put the rug back and walked out the door.

And I haven't been good for shit the rest of the day and I swear, if this heat doesn't break soon, I will. Today it went from something like 64 degrees this morning to 96 degrees this afternoon. That's cruel.

I'm hoping tomorrow will be a better day. Lily and Jessie and I have talked about going to Monticello to see Terez and let the kids play in the library for awhile. I would like to do that. I actually met Lily and Jason and Maggie for lunch when I was in town and Maggie's kisses were everything. Grandchildren and their love can bring me back from the brink better than anything. 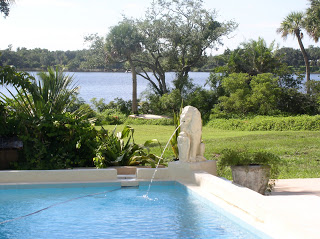 We're talking about taking the little boat and using it to putter about on the Sebastian and Indian Rivers. There's a dock right there that the owner says we could tie up to.

So that's all good.
And tonight there will be sleep.

How are YOU?
I'd love to know.