And This Is Where We Are

I never watch the news. I just don't. But today when I heard that the barbecued intestine was going to have a press conference I determined that hell yes, I was going to watch the fucking thing. Every fucking moment of it.
And I did.
It was exactly as I had expected it would be. He rambled, he bragged, he jumped from Iran to the border wall. He repeated the lie about having mountain climbers (the best mountain climbers!) testing it and it was the best (the best!) at being unclimbable.
Has he not seen the videos of Mexican kids climbing the wall for fun?
He called the news media "fake" over and over again.
He called this newest whistle-blower report another witch hunt.
He claimed that "senators" had done the same thing he was being accused of but the difference is- he didn't do it!
He bragged some more. He listed all of the nations he'd had meetings with in the past three days at the UN Conference. He bragged about the fact that China wants to make a deal now but maybe, maybe not. He bragged about the economy. He bragged about jobs. He bragged about how great African Americans, Asian Americans, and Hispanic Americans are doing. He bragged over and over again about the 2016 election.
He insinuated that there are some "interesting things" about the whistle blower him- or herself. Does he even know who the whistle blower is? Who knows?
He was belligerent, and subdued at the same time. I think that for once he may actually realize that he's screwed the pooch.
You know what he did not mention? Not once?
The UN Climate Change Summit and the reports that came out of that. And to tell you the truth- this bullshit about Donald Trump will eventually be history but if we don't do something and do it fast, there isn't going to be anyone to read that history and no matter what we do, as Greta Thunberg said- Change is coming.
Change is here.

Oh Jesus we are fucked.

As Trump kept ragging on about the economy and how great it is and blah, blah, blah all I could think about was Greta telling the World Leaders at the UN summit this week that all they talk about is money and economic growth. "How DARE you?!" she almost screamed at them.
Yes. How dare we?
And how dare Trump claim that all he cares about is the American people when it is quite clear that he doesn't care about the American people on any level whatsoever except that they vote for him in next year's election?

HAS he finally screwed the pooch? Well, I give that a little better odds than I do that he'd ever do anything about climate change except to ensure that it happens even faster.

On a personal level, I had a very nice day. I probably added to the carbon level handsomely. I drove to town again (but in my Prius, people!) to meet Lily and Jessie at the library to go to toddler story hour. I missed the part where they sang Happy Birthday to August and I'm so sad about that but Lily sent me a picture. 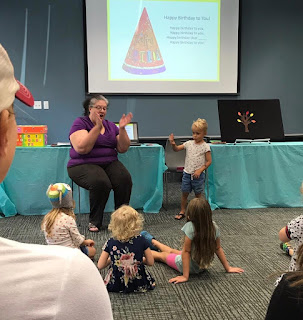 There he is, holding up four fingers to indicate how old he is about to be.

After the library we went to Costco where we bought things for the Big Birthday Bonanza. 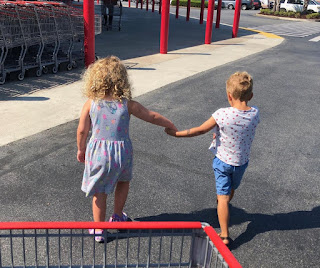 The shopping was a fiesta in itself with some good samples and lots of cousin play. 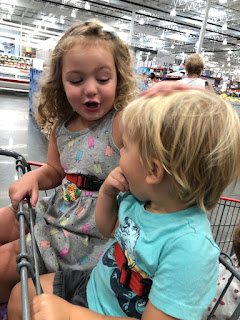 Lily had a small breakdown in front of the plastic cups because you can buy 240 of them at Costco for less than you can probably buy 40 at the regular grocery store but WHO NEEDS 240 PLASTIC CUPS?
None of us.
I told her I'd buy the plastic cups at Publix in a reasonable amount.
And here you go- we are going to buy plastic cups because...they are easy. There they are! Already made and bagged up and priced to sell!
And the planet dies.
And then we went to lunch. Yes, all I do is go to lunch. It's true.
How I wish that when I was a young mother I could have gone to lunch now and then. It would have been precious. And honestly- nothing in the world makes me any more happy than going to lunch with my babies.
Maggie is going through an especially Mama-Love moment in time. She can't get enough of her mother. It's so beautiful. 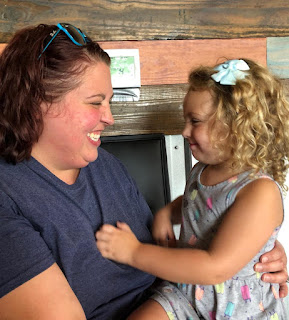 Her mama likes it too.
And yet, she lets her Mer take her to the bathroom and when she got to ride in my car all the way to the restaurant which was approximately a five-hundred yard drive, she was so happy.
"I so 'cited to ride in your car, Mer!" She is simply a very loving child.

And in other big news, a very close friend of ours has been selected to be on the jury of a HUGE Tallahassee trial that has had nationwide attention. I can't and won't say anything more than that but this is crazy and weird and amazing all at once. The very big downside is that she's not going to be compensated for her time enough to pay her bills which is bad. Her employer only gives a certain number of paid days off and you only get fifteen dollars a day for jury duty and this case may have up to a month of testimony alone.
But what a story she will have to tell.