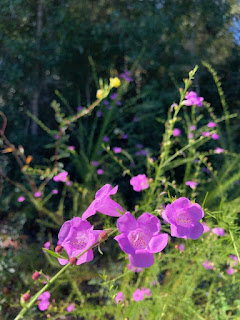 The weather continues to be hot and I've been moving my little sprinkler around all day. My weather widget does finally show rain forecast but not until next Sunday and that's a long way off and who knows if it will even happen? Meanwhile, the temperatures are going to be in the nineties again all week.
Hello, October!
Usually by this time I'd have some of my fall garden in but it's too damn hot to get out there and plant anything. Everything that I do outside has to be done in short bursts. I just can't take the heat. Still, I managed to hang clothes and water the porch plants and sweep off the little side porch. And like I said- move the sprinkler.
And I took a walk this morning before it got burning hot. I actually crossed paths with a runner twice which I don't think has ever happened before. Lloyd isn't a place where a lot of people voluntarily exercise except for cyclists and they don't live here. I imagine some people, like my husband, go to the gym but there are an awful lot of folks who probably couldn't begin to afford a gym membership, even one at the YMCA.
There is poverty here. That's all there is to it. It's not just "underprivileged." It's pure, ugly poverty. The man to whom we give our roosters when we have too many, the guy I call "No Man Lord" because he has a cross in his yard and he used to have a sign with those words on it, lived for years in a single-wide trailer but a few days ago someone pulled an RV up into his yard and the next thing I knew, the trailer was gone and now he is living in the RV. I don't think it's even hooked up to electricity and I have no idea what he does for running water. He seems to have relatives next door who do have a sweet little house and maybe he gets his water there.
There isn't even a tree that shades that RV but I see him sitting in a chair frequently, underneath the shade of one to the side of the yard reading his Bible. He often raises his arms in greeting, throwing them up to the sky and I always say, "Hello! Good morning!"
I have no idea what he lives on. 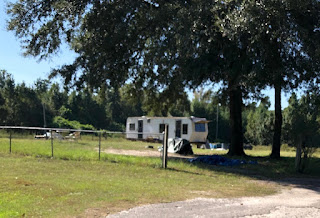 This is America.
He has no car except for a junked one over to the other side of his yard. It does seem as if there are people who stop by and check in on him and as I said, the people in the house next door may be relatives. Folks do take care of each other around here. And I have had people knock on my door who asked for money but this man never has. Whenever I am asked, I do give a little, but No Man Lord has never even accepted the offer of a ride when he was walking home from the convenience store in broiling heat.
"Just you stopping and asking if I needed a ride is enough," he told me. I could have wept.
But he will take our roosters and greens from the garden too, when we offer. He is proud and he has put his faith in his god and so far, that has sustained him. 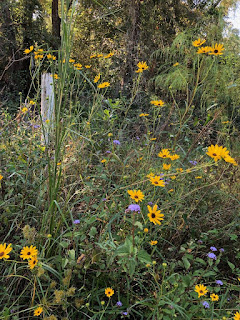 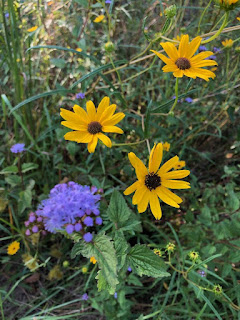 These flowers were blooming. They are so sweet. They cheered me as I walked.
A guy in a pick-up stopped and rolled down his window and asked me if I'd seen two bulldogs running free.
"Not today," I said.
"Well, mine took off. They always come back but it's taking longer this time than usual. If you see them, don't be scared. They're really gentle."
"Okay," I said. They may well be gentle but I have a feeling that if they got into my yard and went after my chickens it would be bloody. Dogs can't really help who and what they are and unless they've been specifically trained not to chase chickens, they will do it. As I know from sad experience. But I have not seen them. I hope they've wandered themselves back home.

When I was walking back from the post office I thought to myself, "It's time for the sasangua to start blooming." I looked up and yes. It is. 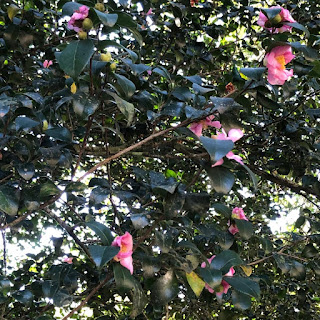 These plants live next door to me and they are old and they are tall and I think I love the petals on the sidewalk when they drop as much as I love the blooms in the trees. They create a magic carpet for a fairy bride.

I did some ironing and I did a little more stitching while watching Derek on Netflix. It's just a very simple series with a very simple premise- it's a sort of docu-comedy/drama like Gervais's other huge hit, The Office, but this one is based around a guy who works in a nursing home, or as they call them in Great Britain, a care home. Derek, played by Gervais who also writes and directs the series is a guy with possible unexplained disabilities who works at the home and he is a sort of Zen master of kindness. Of course one does get completely involved with the characters in these things. The manager of this place is a true saint named Hannah whom Derek adores with every fiber of his being. Some of the characters, one in particular, are a bit, um, unsavory. There are the usual tropes of the elderly who spend a lot of time dozing in their chairs in the common area and who sometimes have sex. There are the uncaring adult children and grandchildren who find it hard to find the time to come and visit their elders and the wisdom that those elders could impart if they were only allowed. They bring in new characters with the people who are sentenced to do community service in a care home and at least one of them has stolen my heart.
It's just fucking sweet and some of the actors are supremely gifted and suited for their roles.
Here's a trailer in case you're wondering if you might find it interesting.

And so that's been my day. Mr. Moon is not home yet. He's leaving on Friday morning to drive to Canada with two other guys and some hunting dogs in a Suburban. Although this sounds like pure holy hell to me, he is excited beyond belief. Once again I can only say that although I do not understand everything about what my husband loves, I do understand that he loves these things and that they are very important to him. Just as he understands that sitting here every evening typing out words is very important to me despite the fact that I am sure he does not truly understand why.
Well, that makes two of us.
But he has a lot to do to get ready. He took my car in today to get some work done on it so that all will be well when he is gone. He is a most responsible husband.
He is going to be gone for nine days. Last night I related the conversation I had with Lis about this. I told her how long he was going to be gone and she said, "What are you going to do while he's gone?"
"Whatever I want!" I said, brass-bold. "In fact, I've already bought two cans of Le Sueur baby peas!"
We giggled like Betty and Wilma because both of us love those peas and our husbands do not and so when they're away, we indulge.
So yeah, baby! It's probably going to go something like that. UNLIMITED AMOUNTS OF CANNED LE SUEUR BABY PEAS!

And now he's home. Tonight we're having a peppered venison stir fry, "inspired" by a NYT's recipe. It will also have cabbage, asparagus, onions, and mushrooms in it.
I wonder what three men on the road with dogs will be eating. I have a feeling it won't include asparagus. I better feed him up good before he leaves. He's sort of important to me.
As in- please let me die before he does.

And on that cheerful note I will say good-night.