Today I woke up feeling dark and nothing ahead of me beckoned me with any cheer at all. I didn't want to walk and didn't- what's the point?
Of course there's always a point but some days you just can't see it and even if you can you don't care.
Luckily Jessie texted and asked if anyone wanted to go to lunch and that, at least seemed to be a good idea. I know that even if nothing else appears to be worth the doing, seeing the children will pull me through when nothing else will.
Hank and Rachel could go too and I picked up Hank and we went to Tan's and if any of you live in Tallahassee and have never eaten there, I would really encourage you to do so. It's a good restaurant and the food today seemed especially especially delicious from the Mongolian tofu to the beautiful sushi and the things they do with eggplant will make you dance.
August and Levon were happy boys. Levon told us all about various large equipment. He is quite apt to greet you with the words, "Dump truck," instead of "hello" or "hey" or something boring like that. He was wearing a shirt with a truck on it and he pointed this out repeatedly. I asked him if he'd had a good time on the boat yesterday and between then and now he has decided that he did.
"Daddy drive," he said.
August was an even more golden shade of brown from yesterday's sun. I would be interested to see what his DNA says about where some of his beautiful color comes from. Neither Vergil or Jessie has his perfect toasty color. And his eyes are so dark brown although that hair keeps growing in blond as can be. His mama had just cut it for him and he looked quite stylish.
He was Uncle Hank's boy today. I think he was angling for something from the Hoarder's Delight box but alas! The box was not in Hank's car which Rachel had driven from her office. He accepted this fact with equanimity. 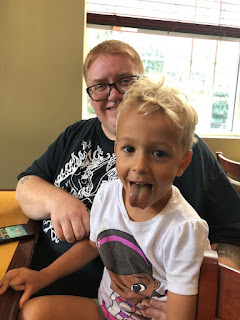 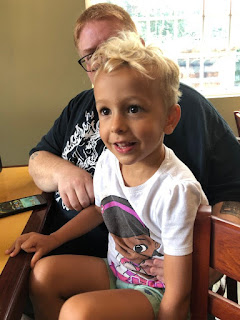 Even without a box of wonders to pick a gift from, his uncle amused him greatly today.

Our friend John, aka Juancho, aka Husband of Beloved Melissa, also showed up and joined us at our table. He and Rachel work together and had both just gotten out of a two-and-a-half hour meeting and were ready for some lunch. We'd actually been talking about John when he appeared. He and his wife have recently returned from a real, true vacation where they went out west and visited his family and drove around and went to cool places.
"Who does that anymore?" asked Jessie.
More people should.
We asked him about the trip and he said they'd had a great time. His brother-in-law in California is now in the weed business on the construction side. He is building grow facilities and also retail outlets, partnered with another guy who handles the product side. We all admitted that it was pretty crazy to live in these days when all of a sudden, that which would have put you in jail is now big business. It seems like it's happened overnight which of course isn't true. But the idea of being able to go into a lovely store and talk to knowledgeable people about weed is just...crazy!
Mr. Moon has his medical marijuana card and he brings home brochures from the dispensaries that really blow my mind. It's like Cheech and Chong and Snoop Dogg and Jimmy Buffet had a dream and we're living in it these days.
Part of me is saying, "Hallelujah!" and another part of me is so fucking angry because of all the lives that have been destroyed by pot laws that everyone has known were stupid and applied arbitrarily, of course affecting African American men in numbers far exceeding what white folks have experienced thus providing business and fodder for the goddammed private prison industry. Laws are changing and some states are releasing prisoners who have been incarcerated on marijuana charges but there are still people in jail literally dying after years of being kept in prison for having been arrested for possession of ridiculously small amounts of weed leaving families without breadwinners, without fathers, without husbands, sons, and brothers.
Okay. Okay. We all know it's some kinda bullshit. And even if the laws are changing to the benefit of some while others are still looking at years of prison, the change is positive. And not everyone who is bringing home a paycheck because of the new laws is a celebrity with their own weed line, but regular guys like John's brother-in-law and of course there are the medical benefits as well as the fact that reefer is and always has been a positive way to change consciousness especially compared to alcohol and other legal and illegal substances, at least to my mind.
And let me say that I don't even partake although I used to and if I enjoyed it I would today. Humans in every culture have taken mind-altering substances and always will.

So who shoved that particular soap box under my feet tonight?

I never know what's going to come out when I sit down to write. I swear.

Here's a picture of Levon and Rachel. 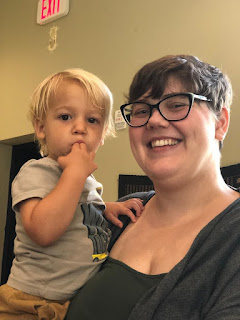 I love those two people. So much. 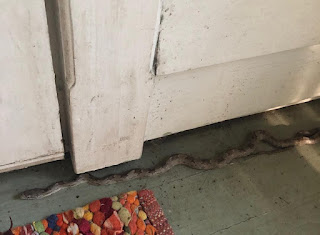 Can you see it? I almost stepped on the poor thing. It's a little oak snake that was on my back porch. I wish I could say that I'm the type of strong, practical woman who can just grab a little snakey and put it outside but I will be honest and tell you I am not. Mr. Moon did catch it for me though, and let it go in the backyard.
It's so funny how if we're at the Junior Museum and one of the people who work there and who are doing a snake presentation hand me a snake I am happy to hold it but if I come upon one in the wild or on my very own porch, I am the biggest wuss in the world.
Logic has nothing to do with so much, no matter how big our human brains are and the older I get, the more I realize that this fact pertains to me.