Sunday Solitude For The Most Part 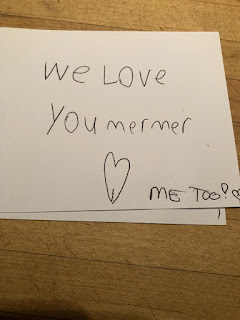 When I got up this morning at the crack of nine, I found that note on the kitchen island. Oh, my boys! They had gotten up at six and taken their snacks and sandwiches (I made them homemade pimento cheese) and towels and whatever else they toted with them and loaded up the car and headed down to the coast where they met up with a friend of Mr. Moon's and his grandson. I hear it was a good day on the water. When they got back I asked Owen how it had gone.
"GREAT!" he said. 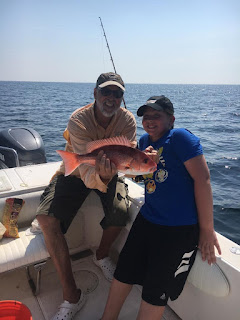 I cannot tell you how long that man has been looking forward to taking Owen fishing out on the Gulf. And now it has happened. He waited until he knew that Owen could tolerate the heat and the hours and it would seem that he timed it right. I am thrilled for him.
Owen is just a precious grandson in so many ways. He is polite and he is helpful and he is sweet. Last night after his shower I asked if he wanted to read in bed by himself or if he wanted me to read to him or if he just wanted to talk about stuff.
He decided we should talk about stuff. And so we did. Nothing very serious or deep. Just school and what he's been doing. Life in general. He was ready for sleep quite soon and I kissed him good night and told him I loved him and he was out in the the bed where I used to try to get him to nap by reading him books and telling him the story of Mr. Peep, who was a turkey who lived next door that we fed every day. He was so little then, my Owen. My little prince, my little rock star. And now he's growing so fast and he's still my prince, my rock star, and also the grandchild who gave me my grandmother name.
Mermer.

And I've had a lovely and quiet day here in Lloyd. Sometimes there is nothing better than a solitary day at home in which to merely piddle about, doing this and doing that. I finished Maggie's dress and then started embroidering one of the butterflies on it. 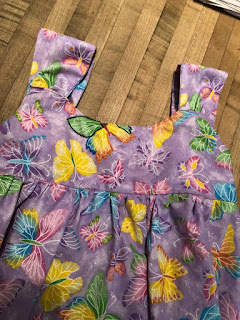 I am very appreciative of all of you who made suggestions about what I could do to make it easier for me to work around this wrist of mine that I broke so long ago and which gives me fits when I do needlework. For now I just do a bit at a time and rest it often, let the blood get back to where it needs to go, let the tendons relax.
Whatever it is that needs to happen before I can begin again.
I am really not much of a needleworker. I do love to do the little that I do but it's not my life. It's just a sweetness that graces my life and also gives me an excuse to watch TV.
It's funny how things that happen when we're young or that we do when we're young come back to, if not haunt us in our older age, at least remind us of accidents or incidents.
My wrist is the way it is because a boyfriend of mine wanted to help a friend of his father's put a new roof on his shed and I wanted to help too. Which was fine until I stepped on a piece of overhang and fell to the ground, my wrist obviously snapped and in a shape that was not at all natural.
I think of that every day of my life as the wrist causes me problems in all sorts of ways. I've been to an orthopedist who looked at the X-ray and said that really, there was nothing to be done except to fuse it which of course I don't want.
But you know what? I don't really regret that day. It was a good day until I fell and even then it wasn't horrible. The endorphins I experienced kicking in after the accident were my first taste of what the body can do and my boyfriend was so gentle and so caring with me, taking me to the hospital, making sure I was okay.
It was what happened afterwards that I don't like to remember which involved the reaction of my parents.
They were not well pleased.
It's all...complicated...as they say and isn't that life?
I learned a lot of lessons that day and not a one of them was about not taking risks and getting on roofs. And I remember those lessons each and every time that wrist aches or grows numb or aches and grows numb or I look at it and see how it's a bit deformed.
It's all right. It's just a part of who I am because of what I've done and where I've been.

Lord, it's been hot. The chickens have almost stopped laying. Three of Miss Darla's four remaining hatched eggs are roosters. We need rain terrible bad.
The hurricane lilies are coming up.