An Encounter With A Large Pig

I went out to take my walk this morning, hoofing it along the sidewalk. So thoughtful of Jefferson County to give me exactly one mile of safe pavement to walk on Old Lloyd Road. That is the name of the road I live on. It also has the name Highway 158 and Gamble Drive.
Don't ask me why.
Anyway I walked past the house next door where eight (EIGHT!) small dogs of different breeds ran out to yap at me although thankfully they are behind a fence. I walked past the little creek, the house where there are two more little dogs who yap, the trailer where No Man Lord guy lives. He is always building something. A fence, a new altar with a cross and a balloon, a pile of aluminum cans, and lately some sort of enclosure which I have no idea what the purpose of might be. I did not see him around today nor did I see the two bulldogs with monstrous heads I saw the other day which gave me a bit of a hesitation to walk by. They were not secured behind the fence and the gate was open but they merely stared at me, their eyes like the eyes of thousand-year old wise and wild things. I walked past the wildflowers and the prison men who were trimming the county's boundary grass, their watcher in his truck, looking at his phone. I walked the stretch of the sidewalk that passes the road that leads to The Greater Elizabeth Church which always makes me think of our own Elizabeth. Their sign today said, "Jesus Preparation is Storm Preparation." As always I had to think about this for awhile to try and discern some sort of wisdom from whatever was posted there but I never do.
And then I got to the shady part where there are beautiful old oaks whose canopy protects and cools those underneath it which is at the very end of the sidewalk and the very end of Jefferson County and the beginning of Leon County when I heard a sort of grunt and looked up to see this. 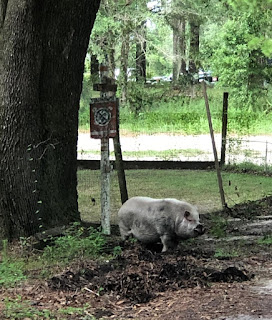 My Lord!
It was a huge potbellied pig and she appeared to be a bit bewildered as if she was saying, "Where am I and what am I doing here?"
I had no idea what sort of disposition she might have and when she snuffled and snorted again I took her picture from a little distance and turned around and walked home. I stopped and talked to the man who had been in his truck who was talking to a guy who lived in the house nearby and asked them if they knew anyone who was missing a pig.
"A potbellied pig?" asked the watcher/driver.
"Yes," I said.
"I think that might be Melissa's. She keeps those things. I'll text her," he said.
Oh, how I love Lloyd sometimes!
So then I walked home and when I drove past about two hours later the pig was still right there, still snuffling in those leaves. It was as if she was afraid to move from that spot and she was smart to stay there, truthfully.

Mr. Moon reports that when he drove home he looked for her (I had sent him a picture, of course because this was big news) but said she was gone by then although he could see where she'd rooted up the leaves, probably looking for nice juicy worms beneath them.
I hope that when Melissa got off work she went and retrieved her pig.

And that was the high point of my day although I did get to see the beautiful woman who works at Costco who always wears mermaid eye shadow. She was working in the liquor store and although I didn't need anything there today I went in just to say hey and she gave me a big hug. Her mother lives in Puerto Rico and they are so relieved that Dorian missed that particular island. And when I went to Publix I found Lily there even though I did not know she was working and that made me very happy too. My own beautiful girl.
She helped me out with my groceries and we said good-bye until tomorrow when we are all- including May!- meeting up at Maria Maria's again because Jessie has never been there and that situation needs to be rectified.

And here's one more picture. Lily sent it this morning. It is of Owen and a girl he's called his girlfriend for about three years now. They had a play date yesterday. 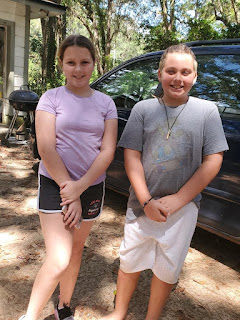 Yesterday that boy was sitting in a stroller looking into the eyes of a rooster named Elvis and here he is now. Aren't they adorable? Wouldn't he hate this?
Forgive me, Owen! I love you!