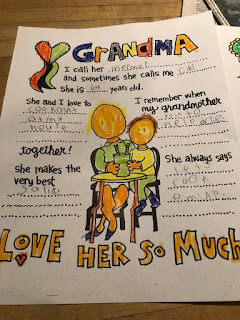 There were grandparents lined up to sign in and get their visiter badges at the boys' school this morning. For some reason unknown to me I had woken up with some fairly bad anxiety and I had to remember to breathe, to focus on what was before me. My pass was already made and ready to be picked up and Mr. Moon joined me and we went on in to find Jason's mother already there. We went on to Gibson's class- the only grandparents there today. Gibson was beside himself with happiness. He is just the most loving child. He sat between me and his other grandmother at lunch and he kept hugging us, one after the other. Lily had told him that I had a surprise for him and when I told him that I was going to check him out of school early he said, "Is that the surprise?!"
He was thrilled.
So we ate chicken roll-ups from Costco and spicy Doritos that I stopped in the little village of Capitola on the way to buy. It was a big deal for me- that stop. I've passed that little store fifty thousand times and never once had I been in it. Wasn't much to see, truthfully. A rather dark tiny convenience store with a few wall coolers with beer and with a tank for bait outside. And they had Doritos. And now I've been in there.
My cookies were enjoyed.
After Gibson's class left, Owen's class came in and we sat with him in the media center where they had tables set up with lovely plastic sheeting for tablecloths and fresh flowers in vases on each table. Owen said that they'd joked earlier in the day about how it looked like there was going to be a wedding. That boy finished up the roll-ups and ate some chips and cookies too. We mostly just watched him eat and chatted. Lily and Jason and his mother are taking the kids to the beach this weekend and they're going to a water park and they are very, very excited. I'm glad they're going to get to go have some fun.
I went to the office to check Gibson out and I thought about our own Jennifer who is an office secretary (or is it receptionist?) at a public school and what an important job that is. The women working in the boys' school office are so kind and caring and they seem to know every child. Gibson was beaming like a pure ray of the light of Jesus when he came to the office and we drove off, discussing our plans. He wanted to go to the Bad-Girls-Get-Saved-By-Jesus thrift store which I figured he would want to do and he said, "And then can we just go to your house?"
"Of course!" said the agoraphobic grandmother who could not possibly have been more pleased.
They had some excellent bargains in the store today. Here's one of them with Gibson in it, the only dang picture I got of either boy all day long. 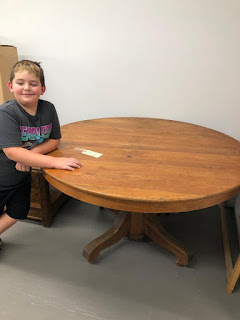 A solid oak table for forty bucks! Too bad I don't need one.
Of course Gibson wanted to look at the toys which we did. He ended up with a stuffed animal- a snake. He loves that snake. Who knows why? We picked out a twirly net petticoat skirt in bright scarlet for Magnolia and I found a big set of magnetic building things for Owen. Gibson was quite concerned that they get presents too.

And then we came home to my house and Gibson drew some pictures in his new sketchbook and played with his new snake friend and found a place along the snake's back that needed stitching up so I stitched it up. He also made the snake a necklace from some new craft beads I'd bought for the kids.
Swanky snake.
We played the matching game and we watched some of Mary Poppins Returns. He ate two pickled okra and after all that, it was time to go home. Maggie loved her new skirt although I brought it home to make the waist-band elastic a little smaller and Owen glommed on to his new building set with great pleasure. It's so strange when he hugs me now because he's almost as tall as I am and I am just not ready for this. Maggie kissed and kissed me and Sammy barked at me but not very much. I asked Maggie how her dance classes were going and she said, "I love it now!"
I bet she does. They got to be butterflies in yesterday's class.
Gibson thanked me for his fun time and his snake and his drawing things and I thanked him for coming over to my house and hanging out with me.

I drove home and looked for the pig that I'd seen earlier in the day, crossing the road like she owned it and then trotting down the side of it. She was still out when Gibson and I drove back to my house from our shopping. It is the hugest pig and very furry and soft-looking. She must have the wandering gene. Either that or she's just a very curious pig. I didn't seen her on my way home and hopefully, she's back in the bosom of her own family again.

The picture at the top of the page is the coloring and work sheet that all of the kids did for their grandparents. My favorite parts are that Gibson thinks I am 64 which is very close and also that I always say, "Lets cook emup."
I'm not sure when I've ever said this but who knows? He also thinks I make good salid. I actually do.

Here's the one he made about his grandfather and it made me laugh and laugh. 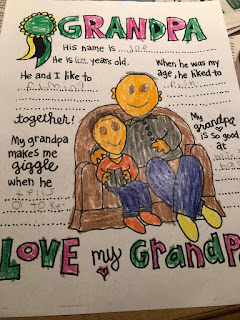 He claims that his grandpa's name is Joe and the reason he did this is because he did not know how to spell Boppy but he does know how to spell Joe.
Mr. Moon laughed too. Perhaps I shall start calling him Joe which is a fine name. According to Gibson, Joe is very good at baskit ball and that pleased his Boppy too.

I'm glad I got to spend some time with that funny boy. I am so curious to see who he grows up to be or at least who he grows to be in the time I will be allotted to observe him. He still makes up pretend stories with things and today in the car he was doing just that with his new snake. I couldn't hear what he was saying but it charmed me that he was doing it. I remember when he was just a tiny boy and would do that with the salt and pepper shaker in a restaurant. Maggie often does the same thing and I see this behavior as the sign of great imaginations and future story-weavers.
Wouldn't that be wonderful?

Friday night. Got a beautiful venison meatloaf with portobello mushrooms, onions, and red peppers ready to go into the oven. I'm sipping a delicious martini with two of my Big Lots cheese-stuffed olives speared in it.
I'm okay.

I hope you are too.