It's All A Sacred Space 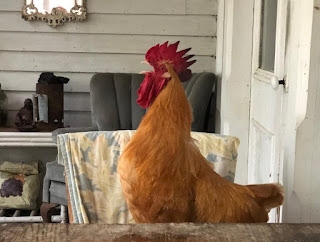 Liberace and some of his ladies decided to hang out on the porch today and while they were there the rooster stood on a chair and opened his beak wide and crowed magnificently. He's a pretty bird but he doesn't have shit for tail feathers. He definitely did not get the gene for that. Right before that crowing, Darla got on the table and pecked at the almost invisible crumbs I'd left from eating my breakfast there. I've almost lived on the back porch today. It's been cool enough and I haven't had a whole lot of inspiration to get much done and some days are just like that.
I did some laundry and worked out in the yard for about an hour, mostly pulling rice paper plants which is an unpleasant thing to do because when disturbed they emit a sort of fine dust which you can actually feel in your mouth from breathing it in and after awhile you find yourself coughing from it and it doesn't feel like a good thing to be doing.
But what is the alternative?
The only one I can see is to hire someone else to do it and that doesn't seem fair. They're not hard to pull, especially the tiny ones which are mostly what I was pulling today but it's a pain in the ass and a cough in the throat and dust in the mouth and there are so many of them. I truly wish they'd never been planted here but I suppose that someone thought it was a good idea at one time.
Here's something I am so glad that grew in this yard. I doubt any human person planted it though. 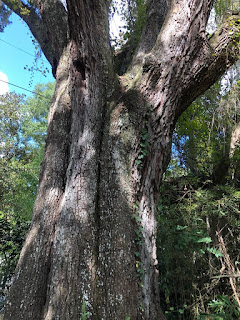 It's the beautiful old oak in my front yard and you can't possibly get a scale of how huge it is. Anyone who could stand beside or under this tree and not feel that it's a sentient being is not someone I would purposefully hang out with.
I've been having a conversation about spirituality, for lack of a better word, with an online friend of mine today. We differ in our feelings and beliefs but we are both old enough and both smart enough to know that we can differ and it's fine. And then a Facebook friend of mine whom I do know in real life posted about how different her and her husband's beliefs and practices are and how that's sometimes tricky to navigate but that they manage, and are able to appreciate the path that the other is on. They have very definite practices, each in their different ways and although I do not understand either, I respect that they have them. I believe they are sincere in their quests, in their attempts to make sense of the world and of life in their own more formalized ways.
So I've been thinking about these things today and quite honestly, I do think about religion and spiritual practices quite frequently. Sometimes I even wish that I had a defined and satisfying spiritual life but I don't. I have actually tried throughout my life to adopt one or another but as I wrote to my friend, they never felt as if they fit. I felt as if I was playing a part or playing a game.
I know I've told this story before but when I was quite young, perhaps around ten or eleven, I saw a televised Billy Graham revival thing. Whatever it was they called those huge productions with choirs and testimonies and preaching and wailing and gnashing of teeth and crying. Billy held on to the edges of his podium and tossed his golden forelock in the shining sun and proclaimed the power of JAEESUS and the healing that was possible if we would just take our cares to GOD and I tried that. This was when my stepfather was still abusing me and sometimes I would get down on my knees (which was painful- I had a woven rattan rug in my room instead of carpet) and prayed and prayed to Jesus and his holy father to make my stepfather quit coming into my room at night, to make our family happy, to let me enter into a state of grace and goodness.
Well. Nothing happened. My heart did not open and Jesus did not make an appearance and my stepfather still kept coming into my room and my mother kept getting headaches and taking to her bed and weeping.
So then I decided to read the Bible. This was when I was in Jr. High school so I was probably twelve? Thirteen?
Reading the Bible in order to become inspired did not work for me. I read it. Cover to cover. Of course I didn't understand a lot of it. And the "begats" were boring as hell. There were some pretty juicy parts. But it all just seemed like a bunch of stories stuck together until the New Testament at which point the books kept disagreeing with each other and then came Revelations and who in the world could understand that shit?
Even at my young age I could not and would not accept the veracity of any of it and that pretty much ended my Christian phase.
We did go to church sometimes but none of the sermons touched me in the least. Looking back it was all so white bread and the only thing I liked about it was that we would go out to eat for lunch when it was over, usually at Morrison's Cafeteria and that was a real treat.
Food over religion. It's always worked for me.
When I got older I dipped my toe into Buddhism without knowing a thing about it. I really still don't understand much about it. I've tried but my pragmatism just keeps popping up to block my way down the path. New Age-y stuff drives me insane. The first time I ever attended a ceremony where the four spirits were conjured and evoked I could only think, "Fuck this shit. We're white people."
I've been through a candle-burning phase, an altar-making phase, a sage-burning phase.
And now I'm to the point where all of those make me feel like a pretender.
Mopping a floor with Fabuloso and white vinegar is more effective as a spirit-chaser for me than burning sage. Or incense. I don't believe in Feng Shui although I do believe in arranging furniture so that you don't run into it and hurt yourself and I also believe that a tidy and uncluttered space leads to more serenity than a cluttered one. This is a bit of an untested theory in my house.
I have also been through a Madonna phase. I have pictures of the Madonna all over my house. I inherited some of them as well as the love for the love of the images from my friend Sue. Even as I jumped in with both feet, I knew that it was more of a goddess/mother thing than a sacred thing. And of course the Virgin of Guadalupe is beloved as "La Reina de Mexico" so I glommed on to her in a big way. I still love my sweet little folk-art carved and painted version of her in my hallway 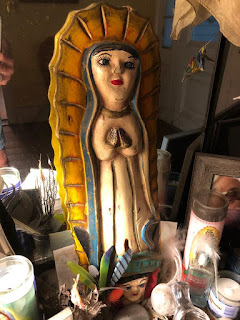 but the other images of the Virgin I have hanging about have become more weary to me lately. Still, some of them are beautiful. 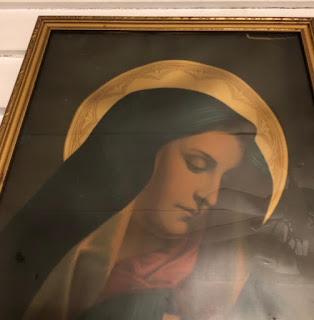 This one was my Sue's.

Here's a picture of a mother and child and a father, too, that I honestly cherish. 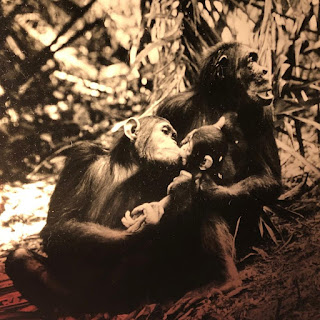 May bought me that at a Goodwill and it means more to me than one would think. It reminds me that a mother's love for her child is deeply ingrained in our DNA and that's why we're still here. Of course the same is true for chickens and alligators and raccoons and possums and dolphins too. Which doesn't make that love one bit less miraculous or beautiful.

It's pretty much all a fucking miracle, I think. I mean- here we are. We may not be here for a whole lot longer although this picture does give me some hope. 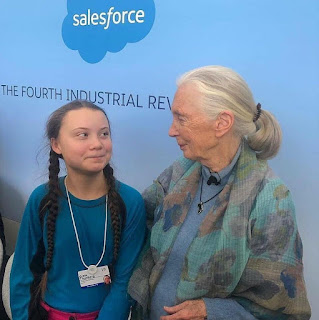 And to tie things up, Hank just posted a picture on my timeline on Facebook that honestly makes me think that there are types of psychic (again- for lack of a better word) communication which exist which we do not understand as of yet but which are as real as ink on paper, as blood and as bones.
Here it is. 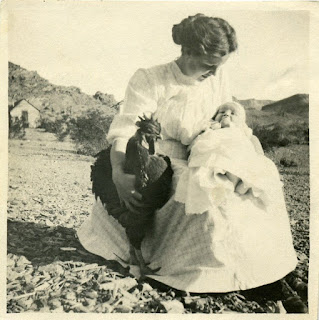 I mean- he JUST posted it this minute.

You can't make this shit up.

I love you, Hank. And all of my babies. It may just be a trick of evolution to ensure the safety and protection and nurturing of future generations but it works for me.
And yeah, chicken-love? Same thing.
As I so often say- it's in our DNA. And chickens have done more for the human species than Jesus Christ.
At least that's what I think.
I could be wrong.
I frequently am.