When Memes Won't Do 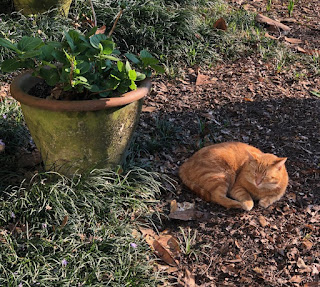 Let's just call it Maurice week, shall we?

It's been an odd day for me. I've spent most of it town with my husband and although parts of it were pleasurable, parts were not so much.
We met up at Costco to look at their washing machines. Today was the day to buy one. Now, you know how often I go to Costco and 99% of the time I go with some combination of my children and grandchildren. It's not just shopping- it's a social event. But I gotta tell you, going with Mr. Moon is not the same AT ALL. Good Lord, he has no idea how to have a good time there. He didn't even want to go in the coldy room! He didn't want to look at jewelry. He didn't even care about the samples. I got a sample of some absolutely terrific grass-fed sliced sirloin with some mashed potatoes and I offered to share it with him. This would be about half a bite of food. But he said, and I quote, No. I ate my raw vegetables on the way over here.
More for me.
I could tell that he did not know one employee by sight, much less name. It was just all wrong.
We did see a washing machine that we liked a lot. But we didn't buy it. I bought a ten pound bag of sweet onions and way too many small cucumbers. He picked out some clothes for our friend who is now in a rehab facility. More on that later. When we were standing in line to get our receipt checked against the contents in our cart I told him that really, he was not as much fun to shop at Costco with as the grandchildren are.
"Next time I'll throw a few fits and eat all the samples and cry. How's that?"
"Perfect!" I said.

Then we went to Lowe's. Gotta do your due diligence, right? They had nothing we wanted except the restroom. I really had to pee.

After that we went to lunch at a Cuban place and I was not impressed. It was sorely mediocre. But you know- I didn't cook it or have to clean up after it so it was fine. Then we went to the family-owned place where we seem to end up buying all of our appliances. The same washing machine we'd liked at Costco was one they had in stock which someone had ordered but had not been able to use because they had not estimated the space constraints properly. In other words, it was too big. This is a machine that I will be able to wash rugs in with unprecedented ease and abandon. It's going to stick out a little too much in our laundry room too but what the hell? We got a decent deal on it and they'll deliver it next Monday unless Mr. Moon goes in with his truck and just picks that bad boy up and brings it home himself. I can't begin to tell you how excited I am.
We got all the paperwork done and paid for the newest family member and then we drove to the rehabilitation center where our friend is staying after his stroke.
And that was not pleasurable in the least.
But it was real.
He looks fine and he's lucid as hell and as smart as ever and all of his problems are in one leg and one arm and hand. The arm and hand he can use somewhat but not the leg.
It's a bad fucking situation and there's a lot more going on but for the moment, that's what he's dealing with.
We wheeled him out to a little courtyard where there was good cool air and a blue sky and a few plants. We talked for quite awhile. Well, mostly he talked. He needs to talk. He needs to be listened to and both Mr. Moon and I are smart enough not to get all freaking fake optimistic with him and say stupid shit that's not true. And it's hard.
As we sat and talked a pretty little green lizard made his way across the bench in front of us and then another man in a wheelchair managed to get out of the door and into the courtyard and he got a little exercise in the sunshine but when it came time for him to go back in I had to help by opening the door and what sort of a rehab place for stroke victims has doors that people in wheelchairs can't manage on their own?
This kind of a place, I guess.
Every time a patient used his call bell a beeping sound would echo through the halls and a little electronic digital sign hanging from the ceilings would say something like, "Rm 102 Bed A" over and over and over again until I wanted to go myself to Rm 102 and see what the person in Bed A needed. It isn't quite as depressing as the nursing home my friend Lynn lived in for the last few months of her life but it was noisier.

There's really nothing else I can say. The situation is about as dire as one can imagine and if there is a rainbow at the end of this particular storm I can't begin to see what it might be. And neither can our friend.

Well. Even as all of that is happening, there is this. 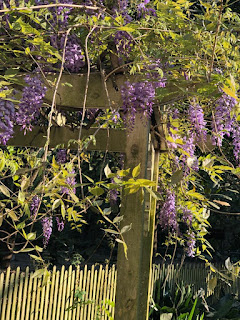 Still so beautiful.
And this. 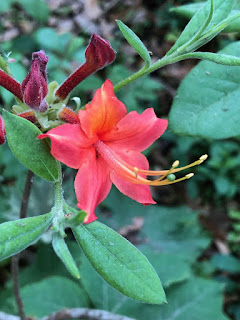 My wild orange flame azalea is finally starting to bloom.

If there is one thing I can glean from our friend's situation it is that we have to just appreciate every molecule of gorgeous normalcy we can.
Wait. Have I said this before?
Yeah well. I'll say it again.