How Not To Accept Gifts 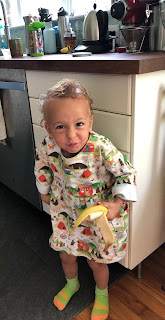 Boy In A Dress, Eating A Banana
He is in touch with his simian roots.

I woke up this morning feeling no more inclined to believe that I fit in this world than I did yesterday. Hot tears kept flooding my eyes for no apparent reason.
It just was that way.
Meanwhile, Mr. Moon got ready to attack the laundry room situation again and Vergil soon came out to help. It made me feel guilty to have these two men here, one who had taken off work and another who had given up one of his days off which he could have spent with his family to come and help fit me out a laundry room.
I realize that it is very hard for me to accept gifts of any type and really, a laundry room is not like a luxurious spa-room or, well, something like that. It's a place where I'll be able to fold clothes on a surface, where I'll have room to move. Where there will be a place for the laundry supplies. It is not exactly a necessity but in some ways, because I already had a laundry space, it is a bit luxurious.
Or so it seems to me.
Who am I, I wonder, to deserve these man hours, this hard work given so freely?
Thinking back to when I was a child, I don't believe I ever learned to ask for what I needed, much less for what I wanted. I think that my younger years were spent trying with all my heart to be as little trouble to my mother as I could be because even though I had no name for what it was she was going through, I intuited that it was very, very difficult and that she was spread about as thin as she could be already. She worked full-time as a teacher and she was not happy in that job. She was a single mother and not happy at all to be one in those days when divorce was almost unknown and a divorcee (what a word!) was almost always judged to be a woman of perhaps loose moral standards at the very least and a home wrecker at the worst. And of course, a complete failure in a world where the only viable option was to get married, stay married, and produce children.
I just knew I needed not to bother my mother overmuch. Money was always a worry even though we did have a nice little house that my grandfather had built for us. We had the basics and a tiny bit more, but not much. My mother and my grandmother made most of my clothes. A new pair of glasses for me was an almost unaffordable necessity.
And then when my stepfather came around and he began abusing me, things changed up a bit. I got presents from him. Sometimes jewelry- a little silver scottie pin, maybe, or a charm bracelet which had one charm on it- a microscopic Bible with the actual Ten Commandments in it. An Easy Bake oven which was ridiculous- I was already using the big stove to make basic meals and bake cookies and cakes in.
And with each of these gifts, there was somehow a silent message- if I kept his secret, the gifts would keep on coming.
I grew to hate those gifts until I was about fifteen and the man drove up in a 911-T Porsche, a car that I had first seen on a trip we took to California (and that trip was a nightmare in all regards) and that I was absolutely enchanted with. He must have found the only slightly pre-owned Porsche in all of central Florida and brought it home. As soon as I got my driver's license, he would start tossing me the keys when I was going out. It was stupid- no child of that age should be given access to that sort of power but my god, I loved that car. I'd learned to drive on a 1960 VW Beetle and the difference between the two cars was like the difference between eating a McDonald's burger and a Filet Mignon. And somehow, I did not kill myself in it or anybody else. And by that time I was old enough to somehow grasp what the man was doing with these gifts, and why and although the abuse had stopped by them, I was angry enough and prideful enough to take whatever I was given and enjoy the hell out of it with a sort of wicked satisfaction. Especially being able to drive that beautiful, amazing car.
Still, he was buying my silence. He had no idea that I had neither the words nor the ability to break that silence then, even if it had occurred to me to do so.

And what all of this led to, I believe, is my inability to gracefully accept anything given to me. It is literally painful for me to accept presents from people I love. And I always feel a confusion when I am given a gift. I can become angry about it, which, when viewed with the perspective of what I've written here, is understandable. Like...so what do YOU want in return?
This is not a way I want to feel. It makes me think of myself in terms that I would rather not think of myself. Ungrateful, ungraceful. Selfish. Those.
And sometimes I am just so overwhelmed that I don't know how to react. When someone gifts me with something coming from what is just so obviously a place of love I don't know how to accept that.
And let's not even talk about how fucked up I am about giving gifts. That's a whole other bowl of wrong soup.

And there you go- Glen and Vergil spending all of this time and effort to make a nice laundry room for me just brings up so much that I can't even begin to describe what I feel but I will say it makes me cry.
And they're done. At least with the washer part. And tomorrow we can go and buy a new one and Mr. Moon will install it and then the dryer will get moved and I'll get some sort of surface to fold clothes on and some shelves for my supplies and I will appreciate that room every time I use it; every time I walk through it. And since the room connects both the back porch and the main part of the house to the newer part of the house which includes my beautiful bathroom, I will walk through it many, many times a day.

Today I did laundry at Jessie's house and played with those boys and read books to August. And to Levon. He handed me first his book about trucks and other fascinating heavy machinery and then the one about animals. He is a smart one. He can point out the dogs and the ducks and the cows. He can tell me with sign language that he wants me to read more to him. He can say "truck" with great authenticity.
We also went to lunch and then to the nursery next door to the restaurant. Jessie needed some tomato plants and a few other things and I needed a big bag of potting soil. They had kid-sized carts there and both August and Levon pushed those things all over the place and I was amazed at how well they did, especially Levon. The combination of a baby and a kid-cart is generally a recipe for disaster with collisions and tears being inevitable but that kid just steered and pushed like he'd been born for the job.
Like it WAS his job. 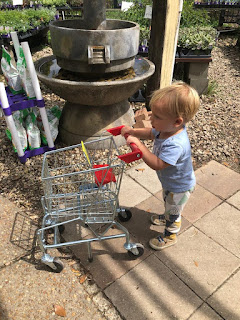 It made me want to go out and get him a little grocery cart of his own to carry his shovels and trucks around in. Giving gifts to grandchildren is not that hard for me. It's such a sweet and pure thing.

People were a bit confused about August in his dress. He was called a girl several times. As in, "What a cute little girl!" and at first, I would correct them and say, "He's actually a boy," and then explain about the dresses and how I made dresses for his cousin and how he wanted dresses too, blah, blah, blah.
But then I realized that it doesn't matter in the least what gender people think he is. Although, it did occur to me that if I told them he's a boy that it might remind them that gender is not always what we think it is.
Oh well. Whatever. The boy loves his dresses and who wouldn't? They're so comfy and floaty and unrestrictive.

In chicken-and-egg news, I got my first two green eggs today in weeks. I guess that Pansy and Eggy-Tina are finally recovering from the psychic and physical wounds that the roosters inflicted on them. I was so delighted to find the eggs, both in the same nest, the two sisters both able and willing to lay again.
It is easy for me to accept the gift of eggs from my hens but I think I may be a bit overly grateful.
I mean...chickens. Eggs. Yeah.
Still. I am gladdened by each one of them. 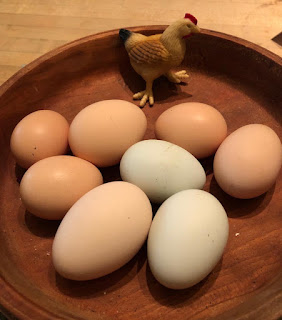 Each hen's egg is so very distinctive and different.

I have no ending tonight. No tie-it-all-up-in-a-bow-and-deliver-it tonight.
I suppose it's like one of my clumsy, poorly wrapped gifts.
Trust me though, my heart was in it. As it generally is no matter how it may appear. And let me just say that this seemingly completely unrelated topic is yet another way that childhood sexual abuse can affect a survivor for his or her entire life. One more layer of the stinky onion of it all to be peeled back and examined, one more clue as to why things are as they are for us. And with each peeling-back, with each close examination, there is more understanding and a small but important freeing of one part of a soul.