Another One Of Those Sundays 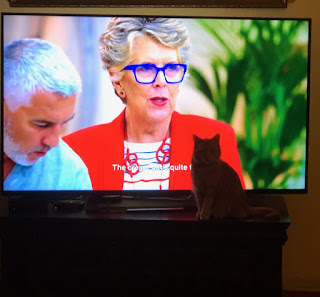 Maurice watching The Great British Bake-Off. As I said to a neighbor today, so many series on Netflix trigger such yucky things that I don't want to think about but all the Bake-Off triggers is a desire to eat baked goods.

I have been so frustrated today. To the point of anger. And you know what? I have no reason for this frustration. I WANT to be angry at my husband but honestly, all he's done is spend the day under the house working on getting the plumbing set up for the laundry room which is hardly like spending the day in a sports bar or bordello or something. So it's ridiculous for me to focus my anger on him and I know that. I KNOW THAT!
I don't know what's going on. If I were a younger woman, I'd think I was premenstrual but that's something I will never be able to blame a horrid mood on again.
Maybe I'm just overwhelmed with everything and adding on not having water for an entire afternoon and having to stick close to the center of laundry-room-creating-operations in order to go and hold a pipe which is sticking out of the floor while my husband does something mysterious to it from where he's laying on his back on the ground which meant I got NOTHING DONE just kicked me off the edge.
I don't even know what I think I'd have gotten done if I'd had the chance. And frankly, I did get August's dress finished. 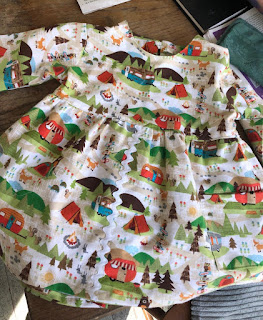 I believe we shall call this the "happy camper" dress. It's going to swamp him and by next week it'll be too hot for him to wear anyway.
So, yeah. That was a huge, big deal.

I just Facebook unfollowed someone I've known in real life for about thirty years because he wrote this as a comment under a video of an ABC news report about the Mueller report:

Now investigste (sic) the real criminals and America haters...obama, hitlery, pelosi, and a few others on the list.

Here's the weird thing- I thought I knew this guy. He's never been in the military, he's lived the sex, drugs, and rock and roll lifestyle. He loves and truly cares for animals more than anyone I've ever known. Hell, he worked at the local food coop! He is a kind man. I've only seen him treat women with true respect. And yet...
Hitlery?
And herein lies the fucking goddam conundrum- aren't we supposed to be able to push aside our differences when someone we know and whom we've always cared for expresses a political opinion with which we very much disagree? Yes. Yes we are. But the divide created by this particular president and his followers is so stark and so sharply defined that I just can't bring myself to ignore that. It's not possible! Not for little ol' unenlightened me.
It's like, "So really? All this time you thought it was cool to talk about women as if they're objects here for nothing more than male satisfaction and enjoyment? And that you really don't see anything wrong with white nationalism? And that you really don't care about the environment or freedom of the press or, or... THE TRUTH?"
The strangest thing about this particular instance is that this man is, himself, the son of immigrants who fled their beloved country because of a dictator.
Go figure. I can't. So I just unfollowed him.
Ooh. Aren't I a brave woman?
No. No I am not.

Okay. That's enough of that. It's only adding to my frenzy of weirdness and bad attitude.
Now my husband has gone to the hospital to visit our friend. How can I be angry at a man like that?
And I'm not.
I think I'm just really tired of not feeling as if I have any autonomy. I probably need a good few days spent entirely alone because that is the way I am made. When the friends of Mr. Moon were here from Chicago, the wife asked me if I was ever afraid to be here by myself. I think this was after she realized that this house has seven doors that access the outside. Or, alternately, the inside.
"No," I told her. "I love being alone and I'm not afraid at all."
Which is the honest to god truth.

Jesus. The chickens are having a very difficult time going to roost tonight. So much fussing and flapping. I wonder what's going on. I think they're still working out the blending of the hens into all being part of Liberace's flock.

One more picture of Maurice. 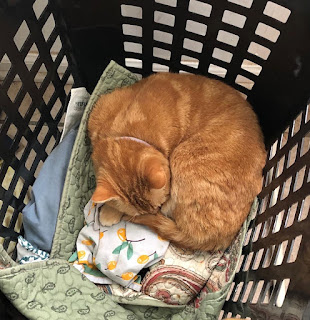 Vergil and August dropped by this morning with things Mr. Moon needed for the plumbing project and while they were here, I read August one of our favorite books, "Pickles The Fire Cat." It's about a cat named Pickles of course, who has a reputation of being a very bad cat but one lady named Mrs. Goodkind realizes that he is NOT a bad cat, he just needs something BIG to do.
August and I discussed how perhaps that is Maurice's problem as well. She just needs to find greater meaning in her life but neither one of us could figure out what that might be. August would probably be very glad for her to go live in a fire station somewhere quite far from here and be a fire cat like Pickles. But I do love that crazy cat and besides, she chose to live here and when a cat picks your house as a place to make her home, there's not much you can do except to buy Friskies. Or, the Publix brand equivalent. And provide cozy sleeping places where the cat feels safe and secure. And keep Band-Aids close at hand for any and all bloody attacks.

That's pretty much all I even pretend to think I know tonight.