Let's All Have A Martini! 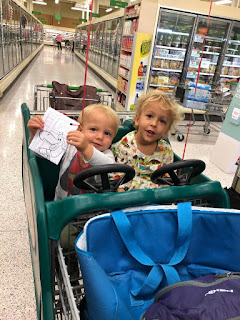 Well, today is not going to be the chicken versus God day. Sorry. But I'm pretty sure you know which side of the argument I fall on. I have been having more thoughts lately about religion and what we call cults and and what it is that makes humans so susceptible to beliefs that on the surface defy every sort of logic.

Today was a busy day. I met Jessie and the boys in town and we went to Costco and Publix and also lunch and then I had a few more errands to run after she and the boys went home. I felt as if I'd scaled Mt. Olympus and been kissed by all the gods when I got them done and pulled into my driveway. But no rest for the wicked, as they say, and I had to hit the ground running.
Jessie and Vergil and those two kids in that picture are coming over for a sleepover. There's a Duke basketball game coming on at 9:00 and Vergil went to Duke and so there will be a viewing of the game, of course. I've changed the sheets on the their bed and made a pineapple upside down cake which is on the plate all wonky because I was talking on the phone when I did the plate/cake flip but I have very little pride when it comes to food presentation and I think it will taste fine. I also whipped some cream to go on it. I've picked the greens for the salad and have the dishwasher running and have swept up a tiny bit of the topsoil that has accumulated in the house recently.
I need a new broom. Badly.
I am looking forward to next week when I shall have use of a washing machine again. I think it may take half the week to catch up but that's just fine. It will be such a pleasure. I am going to wash EVERYTHING!

So that's the story from Lloyd, Florida today. I watered the heck out of the garden and some of the cucumbers are coming up which is heartening.

Sounds like Mr. Moon is trying to start the tractor although it could be something else. August keeps asking about the tractor. Also my washing machine. He seems to be invested in the proper running of the appliances and so forth around here.
Or perhaps he's just being polite.

I better go get started on our supper. Venison meatloaf, roasted yams, and salad. Or, well, roasted sweet potatoes. Let's not get into that debate again. Whatever they are, they will be delicious. The recipe I use is another from the New York Times Cooking app and it involves everything from honey and lime juice and red pepper to scallions and yogurt. Doesn't sound great but trust me- it most definitely is. And my meatloaf brings all the boys into my yard.
I know. That's a stupid saying and I've used it before but it does make me giggle.