Maybe I Should Just Talk About Politics And Religion

I put off my trip to Gatorbone for a day, wanting to go see our friend in the hospital. He indeed had to spend the night and will probably be there for awhile. Not to be dramatic or anything but I do believe that Mr. Moon got him to the ER just in time and now they are putting out fires to try and let his body return to a sort of homeostasis. The root problems will be dealt with but for now, he is resting and getting the medications he needs. It was strange to see him in that hospital bed. I seriously doubt that in the forty plus years I've known him I've ever even seen him laying down. He's just not a laying down sort of guy. He moves. Even when sitting down to watch a basketball game on TV he moves. It's funny how I've never thought about that before.
But there he was and I am so glad he's getting the help he needs and he's comfortable and doesn't seem overly anxious about any of it.

Before we went to the hospital, we met Jessie and the boys at El Patron to sit outside and eat fajitas. Levon slept through a lot of it but when he woke up he sat on his mama's lap and ate and ate and ate. Both boys seem to be going through growth spurts. In other words, they have a lot of room inside of them. 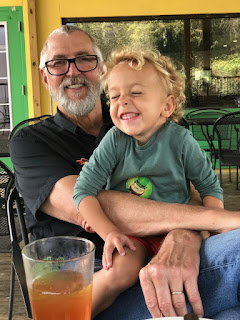 The two Boppys. The Big one and the Little one. 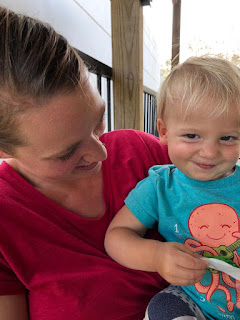 Have you ever seen a more precious little smile?

Okay. Not to change the subject but let's talk about giraffes. I was listening to an interview on NPR today on the show 1 A with Joshua Johnson as host. The guest's name was Adam Rutherford and he's written a book entitled Humanimal. The subject matter is mostly how humans differ from other non-human animals and yes, how they are alike. And of course, why. But almost on a side-note, Mr. Rutherford stated that 95% of giraffe sex is penetrative and happens between two males.
Now.
Hold on.
WHAT??!!
I was stunned. NO ONE EVER TOLD ME THIS!
Of course I had to do extensive research by which I mean I read two articles I'd googled and although I am not sure where Mr. Rutherford got his facts it would appear that yes, male giraffes do have a lively time with each other and also, that even male/female giraffe sex gets sort of kinky and involves the urine of the female.
Maybe Trump's got some giraffe DNA going there.
Anyway, we all now have an excellent comeback to anyone who says that homosexuality is unnatural.
And of course, giraffes are not the only species who same-sex it.
I think I need to read this book.

I've seen no baby chicks yet. The rooster elimination project has begun and I just wrote a long paragraph about that but I've deleted it. Suffice it to say that it's been like gang-rape around here for the hens and one in particular and I'm not having that shit. When weighing out the cruelty of killing a rooster quickly and painlessly versus the cruelty of roosters slowly and painfully killing hens, I know which side I'm on.
It sucks but so does a lot of life.

I'll probably be blogging from my phone for the next three or four days but I will do my best with it. I can say with almost complete certainty that there will be no chicken news which is probably a good thing.

Man. This has to be one of the weirdest posts I've ever written.
And that's saying something.