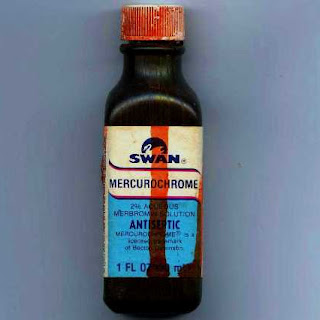 How many of you remember Mercurochrome? It was like iodine's slightly gentler little sister. If you put iodine on a cut it would burn so bad you had to scream. No control over that scream. Apply iodine to an open wound and scream. But Mercurochrome (which is now banned because it contains, uh, mercury) didn't hurt quite as bad. If you were a wussy, you still might scream when it was applied to your boo-boo but if you were a brave little soldier, you could perhaps merely whimper a bit.
I was a clumsy child and uncoordinated. It took me over a year to learn to ride a bicycle. My grandmother finally hired a neighbor girl to teach me. That's how bad it was. And even after I learned I was constantly falling over and off of it. I also fell on the playground at school A LOT. And in those days, they didn't worry about the precious little children and their safety. Our playground was a mixture of dirt and dirt with rocks and oh yes, we could jump rope or play jacks on the cement lid of the septic tank and no, I am not kidding you.
So. I constantly had skinned knees. And well, sometimes, cut knees. And out would come the Mercurochrome and I would apply it myself with that little glass wand that came in the bottle which fit so cleverly into the lid. I guess sterility was not exactly a cherished concept in those days. And it always stung even if it didn't burn with the power of a thousand suns.

But all of this is not what I came here to talk about today.
No. Not really.
It just occurred to me a little while ago that some days are akin to being constantly doused with iodine while others are more like many applications of the gentler Mercurochrome.
Today was one of those.
I woke up with no energy and felt completely guilty about not taking a walk, not getting out in the garden to really get things done there, not pulling up weeds or trimming back palms or whatever. I just didn't feel like it. I felt wimpy and yes, wussy. And sort of whimpery.
Mr. Moon stayed home to work on my laundry room although he wanted to first get the tomatoes planted which would involve tilling the garden which he said would take about an hour and guess what? It's 6:30 at night and he's still weeding that garden by hand and the tomatoes are not in the ground and the laundry room hasn't been touched. Of course he did take a "break" to accompany our friend to the doctor and go to a few places in town but still- I can't complain because that garden needed attention and the plants do need to be planted. I'm just going to have to be patient about the laundry room and that's that.
So anyway, when Mr. Moon is here my desire to at least appear to be productive increases by tenfold because I am not an enlightened person who truly believes that she has worth even if she doesn't suffer while accomplishing something and so I tried this morning. I did kick some bamboo because look at this. 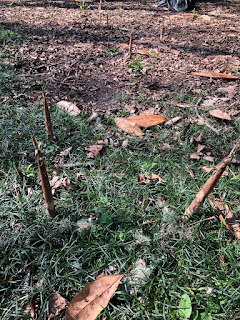 Do you see all those sprouts? That's from one day. There was no sign of them yesterday.
So I kicked bamboo and took stuff to the trash place and planted a few herbs in pots and then I decided to get started making August another dress because that's sort of productive but doesn't take a lot of energy. I've been working on it all day and it's not finished and it's going to be too big and who knows? By next year he may not want to wear dresses at all.
So that's that part of my day.
And guess what? I'm a terrible chicken mama because I should have gotten rid of those eggs so that the mamas would have gotten off their nests but no, I just kept putting it off and yesterday we discovered that in the night some critter had come and eaten all of the eggs AND Viv/Vera, too.
Feel guilty much, Ms. Mary Moon?
Why yes, yes I do.
Dearie is still alive and doesn't seem overly traumatized but she probably is.

I finished listening to Michelle Obama's Becoming today while I was sewing and stuff. It is one hell of a fabulous book and I recommend it with all of my heart. But speaking of my heart, it made that particular organ ache because her descriptions of her husband and the amazing things they did while he was in office and how hard he worked and studied and how much he cared and how much they sacrificed as a couple, as a family, brought me to tears over and over and I think about Trump and the many hours he spends watching Fox news and Tweeting and I just wonder who in the hell is running this country because IT AIN'T HIM!

So. Guilt and weepiness and more guilt and more weepiness and I haven't even talked about a lot of stuff which I am not going to talk about because there's no purpose.

It's just been a Mercurochrome sort of day. And now I better get in there and make our supper. Despite the recent tragedies in the poultry world, the chickens are calm and placid, getting their last pecking and scratching in before bedtime. It amuses me to watch them as they range closer and closer to the hen house as it gets closer to bed time. They are as fond of routine as I am.
I've downloaded another book to listen to and one of the reasons I chose it was because one of the reviewers on Goodreads gave it a poor rating because it had too much stuff about chickens in it. 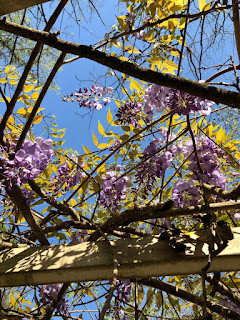 Even the blooming wisteria is making me sad because I have seen exactly one bee courting those flowers. The bees used to visit the blooms in such numbers that standing underneath them was like listening to a symphony of buzzing.

Fuck.
We're doomed.
Forget iodine and fuck Mercurochrome. Those remedies will not do it. And I have no idea what will but I guess we'll just keep lurching forward as best we can until we can't anymore.

Hope I was able to cheer you up a little.