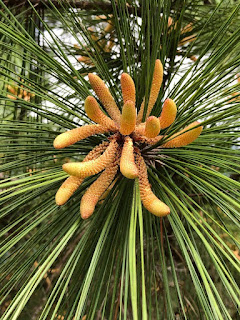 That's a pine blossom. Isn't it lovely? The thing that's not so lovely is the yellow pollen that coats everything here now, sticking to cars and floors and people if they sit long enough. And the gagging and sneezing and sinus problems are at their yearly full force. Still, it's a pretty thing.

Woke up this morning quite cheerful. It's Rachel's birthday and I knew we were all going to meet up at Persis Grille, the Indian buffet for lunch. I finished the cake last night and was quite proud of it. Here's what it looked like this morning after I'd decorated it with some of the blooming roses from the bush that Ellen sent me last year. They have the sweetest scent. 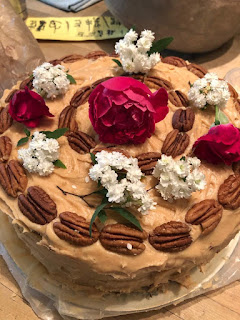 It was sort of a hummingbird cake which has pineapple and banana in it and I threw some fig and guava preserves in there too and the frosting, instead of being made with cream cheese which I did not have, was made with a fig goat-cheese spread that I mixed with the butter and the confectioner's sugar. I had high hopes for it.
Well. I probably won't do that again. It just didn't taste that good. The cake was pretty, though, and it was moist. I think one of the bananas I used wasn't ripe enough which added to the problem. I know you can't win them all but I was very disappointed and vow to do better by Rachel next year. Here's what it looked like after August and Maggie and Wiley added all the cool things from my collection of vintage (garage sale) candle holders and decorations. 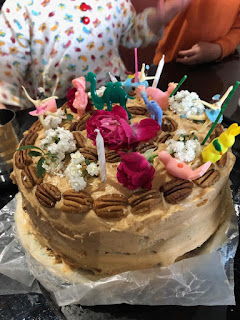 There's a lot going on there.

Before lunch, Jessie and I met at the Costco where she needed some things. I just needed some August and Levon time. Which I got.

Persis was most welcoming. I try very hard not to be a pain when we have these restaurant birthday parties so I brought our own little plates and forks but they made sure that we had everything we needed. Family owned restaurants are the best. As we all know. We had delicious food and lots of chat and Wiley called me grandma again. He is totally convinced that I am one of his grandmothers. Here he is without his glasses. 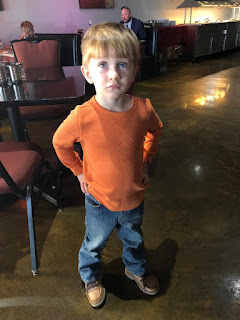 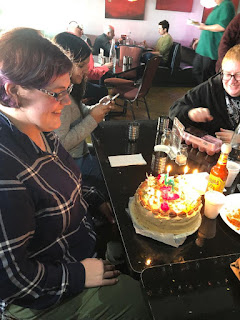 Beautiful Rachel about to blow out the candles. We sang "Happy Birthday" at an appropriate restaurant level, which is to say softly. But with great feeling. 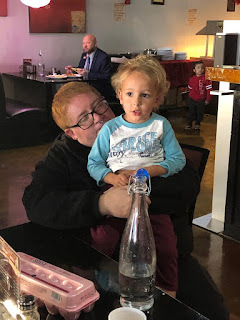 August has suddenly gotten into super heroes and here he and Uncle Hank are discussing the issues surrounding that topic. In Costco I asked him what made the Hulk so strong.
"His muscles," he said.
Smart boy.
See the egg carton? Jessie and I both bring eggs to every gathering for the chicken-deprived. And no, no new news on the chick front. I expect it'll be at least a week before we see any of the little fluffs.
Lord, it's going to be crazy around here.

After our party, we all gathered outside to say good-bye which can take approximately half as long as the original gathering did. Have you ever heard the expression, "Irish goodbye?" That's when someone just takes their leave without saying a word. Not in a rude way, just an expedited way calculated to avoid long and emotional departures. Well, we do the Southern goodbye which is the exact opposite. Everyone has to hug and kiss everyone. At least once. There are side-goodbyes and little chats and catching up on things that we did not have time to talk about during the main event. Also, in our case, there must be a group photo of the children. Today's was not a particularly great photo but when I look back on it, I'll laugh. 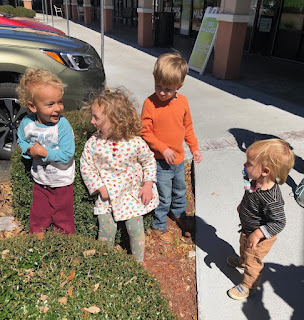 Maggie started the mess when she discovered that she could use the little bushes to scratch her butt. August thought this was a great idea. Wiley tried to get in on it but he wasn't sure.  And Levon? He's wondering why all these kids are being so crazy. His butt is fine.

And so that was my fun lunch with some of my fun family and after we had finally given ALL the kisses and ALL the hugs and said everything we needed to say, I drove to the library and returned books and got books and gave thanks once more for the idea and reality of the public library. I came home, did a few housekeeping chores and then, with the greatest and most luxurious enjoyment, laid down on my bed to start reading one of my new books and then fell asleep. 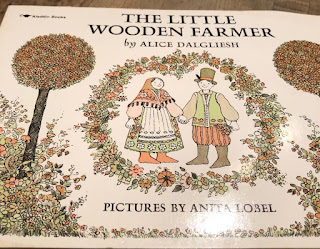 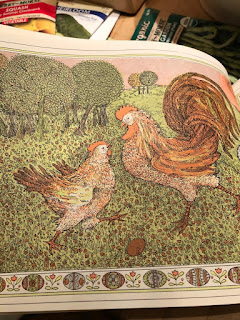 How beautiful.
I am such a lucky woman in so many ways.