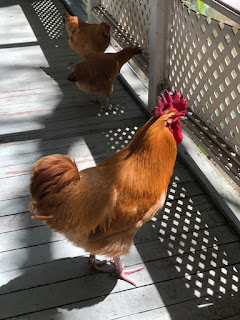 Yesterday I was in the middle part of the house doing something when I heard what I thought was Mr. Moon coming in the door and setting things down. I gave the family whistle which is what we do around here to let someone know where we are. He didn't answer and when I went into the kitchen I saw that he wasn't here so I shrugged and figured the cats did something and went on about my business.
When Mr. Moon did get home and made his way to the den to sit in his chair and watch a little TV and have a little well-deserved time to relax before supper he noticed that the hallway table right outside the den was messed up. Pictures on the floor, a candle on the floor, and something that he did not closely investigate but thought might be cat puke. He called out to me, "What happened here?"
I went and looked and damn if chickens hadn't gotten up there and knocked stuff off and pooped all over too.
Really, birds?
I'd noticed Liberace and some of the hens on the porch earlier in the day, standing at the threshold of the hallway and I guess his curiosity overcame him.
I cleaned it up all up and today I shut the hall door on them when he acted like he wanted to go back in for Round Two.
I suppose that since the rooster threat has passed he has more leisure time to explore. Connie and Clara, the two hens left from Dearie's fall hatching follow him around all day long and no, we won't be discussing the fact that obviously they are his daughters. We'll just pretend that we don't know that.
I just saw the man rooster and Dottie up on the bird feeder where they perch many times a day and Dottie was snatching gnats off of Liberace's face and comb and wattle. When she does this it looks for all the world as if she is giving him little pecking kisses and it's adorable in a small dinosaur/chicken way.

The weather continues to be amazing. It's supposed to get into the forties tonight and it rained last night and the air has been clear and cool and beautiful. I took a walk this morning on White House Road where I saw wild flowers and wisteria that climbed way, way up into the trees as if knowing that the new-green leaves and blue sky make a perfect background for it. 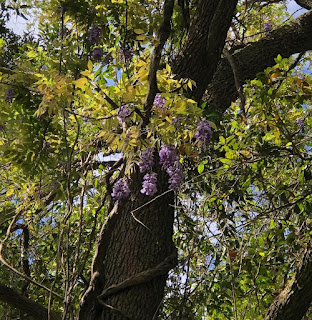 I kicked bamboo when I got home and worked in the garden a little. I've got a weird thing going on with my left knee. Not the joint but the skin itself and if I put my weight on it in a certain way, it feels as if a fire was flashing across it. You can't see anything odd on my skin but I swear, it hurts like holy hell and this sort of detracts from the pleasure of my dirt-prayers. No matter how hard I try I can't entirely avoid doing whatever it is that I'm doing to cause the pain and I yelp and curse every time. So I moved slow and weeded and then I pulled half of the old arugula because it has well and truly bolted. Then I sat and stripped off the usable leaves. I got about half a garbage bag full and I'm not sure what I'm going to do with them. The supper I'm making will use up two cups but that's nothing. 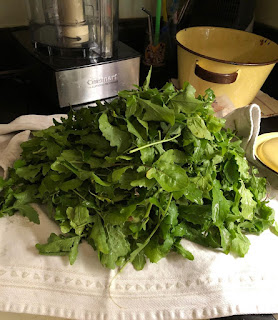 That's just half of them. You can make pesto with arugula and I did that last year but to be honest, I still haven't used it all up. I froze it so neatly in ice cube trays and then bagged up the frozen cubes in freezer bags but I just forget it's in the freezer. Still, I may make more with some of these leaves because I hate to waste them.

I also got a few hills of squash planted. My squash NEVER does well. Don't know why I bother planting it. Eternal optimism? The beans I planted are coming along nicely but the cucumbers haven't broken ground yet. I hope that birds didn't eat all the seeds. Seems unlikely.
What I really need to do is mulch but as I've said, every time I think about raking and hauling that many leaves it makes me want to lay down and cry. I have access to plenty of leaves- my yard is filled with downed oak leaves. They don't drop until winter's end when the new baby leaves push them out of the way and that has indeed happened.
Maybe tomorrow...

And so it's been a day like that. A simple day.
Mr. Moon is not home yet but is visiting with our friend. I am proud of how he is stepping up to do these very hard things. I married such a good man. Watching him take such good care of his buddy makes me love him even more. Amazing how that can happen even after being with someone for thirty-six years.

Do you get the the Poem of the Day from the Poetry Foundation? I do and there are plenty of days that I read the daily offering and am not really moved but some days the poem knocks me out. Today was one of those days. Here's what I got in my e-mail.