Silly Things And Serious Too 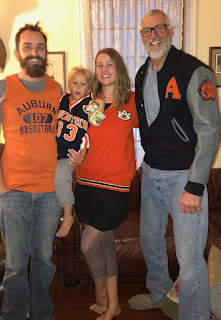 Things got crazy over here at the Moon house last night. There was an Auburn game before the Duke game and Mr. Moon played basketball for Auburn so that was a pretty big deal to him. He showed August one of his old jerseys and August wanted to wear it and before you know it, it looked like that around here.
Silly fun. But seriously, I know that my husband is proud of his days playing ball. After he graduated Auburn he played some pro ball in Europe and I'm glad he did even though he was married to a different wife at the time and she got all the European travel experiences. I believe it was probably one of the best educations he ever got, to live and work in Europe and most likely a real eye-opener for a guy from a tiny town outside of Nashville, Tennessee. By the time he married me he was open to a lot more things he might never have been without that experience. Or maybe he was just born that way. I don't know. His parents never said a racist thing around me and never denigrated a gay person either. They were open and accepting and loving to all even though they were (and I'm sure they'd agree with this) country people. Good people.

And how I got from that picture to Glen's parents is beyond me but I did and isn't that just the way I am? Yes. Yes it is.

August was tired last night and so his mama got him ready for bed before we grown-ups had supper. I told him I would read him one story because I was still working on that supper and he agreed that was okay. He wanted A Fish Out of Water. Of course. So I read it for the four thousand and seventh time.
Approximately.
And I still enjoyed it.
Then I tucked him into his little bed and he wanted Zippy and the little monkey. I offered him some books to read in bed and at first he said that he'd like that but then he said that no, he didn't need any books. I kissed him good-night and he was probably asleep before I got back to the kitchen.
Levon went to sleep soon after and his daddy tucked him into the pack'n'play that stays set up all the time.

Supper was good although the cake was a major disappointment to me. I don't know what I did wrong but it was more like pineapple upside down pudding than cake. Thankfully, whipped cream makes everything okay.

August woke up this morning around 8, jumped up as he always does and said, "Where's Boppy?" Again, as he always does.
Boppy was still in bed and said, "Come get in bed with us, August," but August was having none of that. All of the TV time the night before had been ruined by basketball and he was now ready for some kid TV. So Boppy got up with him and I'm sure that Jessie and Vergil and Levon were already up. I, however, slept until nine.
And then there were pancakes and bacon and eggs 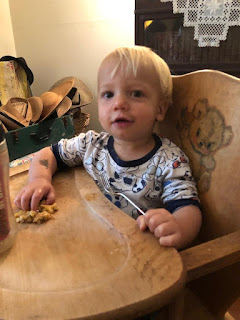 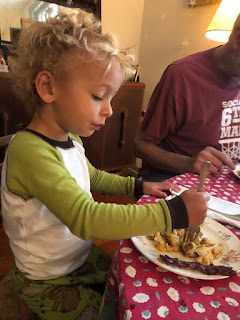 and there were also haircuts for Mr. Moon and Vergil. Jessie is the family barber and set up a stool on the deck where the fellas took turns getting their hair clippered. I was so happy because while Jessie was cutting hair, Levon actually let me take him around the yard and he didn't ask for Mama once. We kicked bamboo which he loved. "Kick," he kept saying. And we checked on eggs and we went to see the goats and we looked at the garden. I took no pictures but in my mind I can see him in his little purple Crocs holding my hand and walking beside me, pointing out the flowers. We also read books with his brother and he already loves books. Especially if they are about animals or trucks. We have a little board book about dump trucks that I think he demanded be read to him by everyone here at least twice.

After they went home, I had a lazy afternoon. Mr. Moon went to town briefly to get chicken feed and hay and scratch and there was a nap when he came home, the sweet cool breeze blowing in the window over our bed. Now he's working on getting the laundry room finished up as to wiring. The guys next door have band practice. They seem to have moved on from metal grunge to something resembling actual music but it's still sort of an auditory intrusion. But hell- it never lasts forever. It's supposed to start raining tomorrow and keep it up for a day or two. That's fine with me. You know how I love the rain.

A new movie just came out that I want to see in an actual theater. Y'all can go ahead and laugh at me but I am extremely excited about it.

I really have no pride, y'all. And even though it's gotten "mixed reviews" to say the least, how can anything with Matthew McConaughey, Snoop Dogg, and Jimmy Buffett not be fun? Okay, it's probably going to be pretty ridiculous but I still can't wait to see it.

And in one more piece of news, this one troubling, the Rolling Stones have canceled or at least postponed their American tour which was supposed to start in April due to an unnamed illness that Mick Jagger has which requires treatment. That word- treatment. It ain't a good word, is it?
Keith had this to say on FB:

Again- y'all can laugh at me all you want but you know how much I cherish these old men. Mick and Keith are both 75 years old and I care. I know I've told you this before but Lily asked me once what I was going to do when Keith Richards died.
"Well, that's not going to happen before I die," I said, and then I added, "But if it does, I am not going to be okay."
Hell. I'm still not even close to being okay with John Lennon being dead.
The Beatles and the Rolling Stones don't just represent huge chunks of my life. They ARE huge chunks of my life.
May Mick live to dance onstage for at least another decade.
Or until I'm well dead and gone.
Whichever comes first.