Another Day Of Reminders 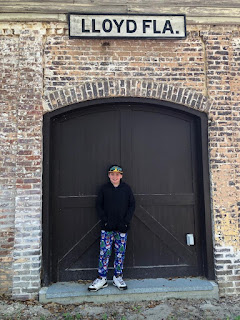 Things were going along normally this morning. Pancakes were made and eaten, Boppy was working in the garden and Vergil and Jessie and the boys were planning on coming out so that Vergil could help Mr. Moon with the laundry room project. Owen and I walked to the post office and he talked about the memories he had of being a little guy and making that walk when he stayed with me. Everything was cool.
The Weatherfords showed up and August was thrilled that his big-boy cousin Owen was here. He adores Owen and I'm sure he admires him tremendously as someone who is strong and can read and who is helpful and kind. And yet, is still a kid. Someone to look up to and yet, is relatable.

Mr. Moon was just about to finish up in the garden when he got a phone call from the neighbor of our friend who has been ill. Our friend had called an ambulance for help and they couldn't get in the gate. Mr. Moon has keys to that gate and he and Vergil sped off.
Turns out that our friend had a stroke in the night and it took him from six in the morning until around eleven to make his way to his phone and dial 911.
Fuck. Fuck, fuck, fuck.
Our friend is a Luddite. That's all there is to it. He did recently get a cell phone but it gets no reception in his house which is in the woods nearby here. Mr. Moon is kicking himself for not getting him a couple of cordless phones to keep around the house. He feels terrible about this although of course, it's not his fault. He's being such a good friend, going to doctors' appointments with him, taking him to pick up his medications, checking on him.
Anyway, Vergil drove my husband home and he showered and changed clothes and went on into town to go to the hospital. He is still there. It has been determined that, as I said, he had a stroke. Strangely, it did not affect his mental capabilities at all, nor his facial muscles. I guess it depends on where the blood block in the brain comes when a stroke occurs. The last I heard, the neurologist was with them and I'm sure I'll get the report later.
This is all so hard.
And that is probably the understatement of the year. 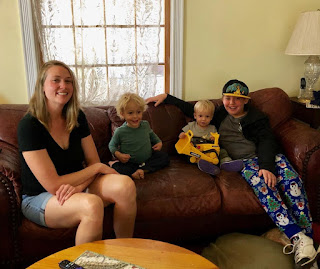 Meanwhile, somehow everyone got fed here. Leftovers were heated and eaten, cheese toasts were made and enjoyed. Vergil went on to do some of the preliminary stuff for the installation of the new washer (which, by the way, we haven't even bought yet), even crawling under the house which is not fun at all. Trust me. I've done it myself.

And the boys and Jessie and I all went outside and had adventures, first in the bamboo jungle and then on the railroad tracks. 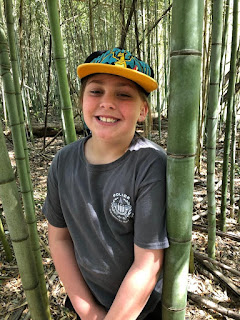 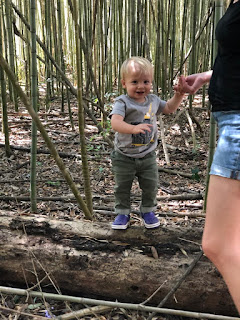 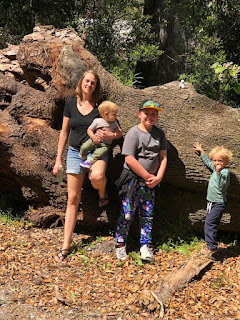 This is part of the tree that came down during Hurricane Michael. The part that didn't land in our yard. It's on the railroad property and I wanted to take this picture to give perspective on just how monstrous it was. And please remember- that was only part of the ancient oak. 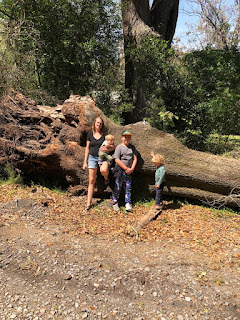 I still can't believe it's gone. Or at least, not living anymore. 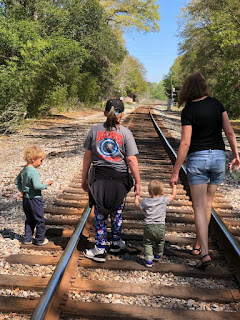 Oh, the fun of walking on the railroad track! We found bones and iron spikes and many, many rocks. Treasures were brought home.

Eventually Vergil crawled out from underneath the house and the whole pack of them loaded up and went back to town. It was suddenly so quiet here. I truly enjoyed Owen's visit and I think he enjoyed being the only kid. Last night we ate our tacos while watching a show that he certainly has never watched before and which I thought he'd probably be terribly bored with- The Great British Baking Show which Mr. Moon and I are slightly addicted to. Surprisingly though, he got into it and was quickly taken with the various personalities and who was good at baking what. When it was over he said that it was so sad that someone had to leave and how different the show was because no one was mad or arguing. I loved that. He is a gentle boy and so kind. He is very good with younger children and helped August with some puzzles and picked up Levon when he needed picking up.
"Levon is so cute," he told me.
"He is a handsome lad, isn't he?" I said.
He's also patient with the little ones and not afraid to show his affection. Yesterday I saw him give Maggie a quick kiss as she passed by him. She didn't even notice but I did. And of course the love in that gesture is something she has known since birth and will always have with her.
After Owen had his shower last night and got in bed, he wanted stories and I read him the books he picked out which are the ones he's always loved. He laughed when I told him that August picks out the exact same books to hear before bed when he spends the night.
So all of that was good. Owen's visit and the visit with Jessie and Vergil and their boys, even as we all felt a bit shell shocked that our friend was in such a frightening situation.

After they left I tidied up and then went out to the garden and finished the little bit of weeding that Mr. Moon didn't get done and got the tomato plants and peppers and eggplants into the ground. They probably aren't where he would have planted them but he was determined that they should be planted today. The sprinklers are on which causes the pipes in this old house to creak a rhythmic groaning song. Before I turned the water on I picked our supper's salad greens. I have no idea if my husband will be home to eat it. Eventually. Eventually he will be.

It seems like each day lately brings some reminder of how very mortal we all are and makes me want to hold tighter than ever to this man I pledged my troth with so many years ago and makes me realize how much I want to love my children and grandchildren and friends with everything I have within me while I can. I think that one of the things I most disdain about religion is how it focuses on what will happen after we die. That we must suffer now in order to know eternal joy. The promises that we will be with our family again after death seem so flat and ridiculous to me. For one thing- there are plenty of people in my family of birth that I'd just as soon avoid for eternity. And to put off joy and whatever love we can make and take now for some ridiculous theoretical life everlasting seems to me to be the most dangerous and sad of philosophies.
Gather ye rosebuds while ye may, I suppose.

And in that spirit, another thing I did was to pick some of the very last camellia blooms and set them in the old copper vase that was my grandmother's and which I have had since I was a young woman. 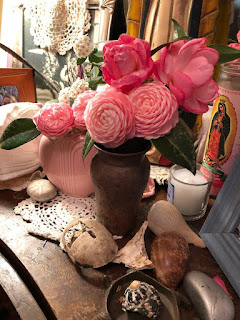 As I picked each one I was in full knowledge that I will not be doing this again until spring and summer and fall have once again passed and it felt almost ceremonial, this plucking and bringing in of such soft pink beauty to enjoy for as long as I can, for as many times a day as I pass by them.

I just got a text from Mr. Moon.
"Trying to get his first meal of the day."
I answered, "Jesus. They can scan your brain but they can't feed you."
"Yep," he answered back.

Oh, we live in a crazy world. Of course a brain scan is important if you've had a stroke. Immensely important.
But so is food.

I'm going to go cook our supper now. And I am going to enjoy every moment of the cooking and then of the eating thereof because this is it. Right here, right now. Because that's truly all we have as far as I can determine. And if we do that properly, it is enough and more than enough. It is, in fact, a sort of heaven.