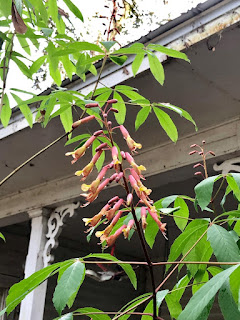 That's the Buckeye blossom. If I were a bee or a hummingbird or a butterfly, I would wear my brightest lipstick, deepest decolletage, and highest heels to court it.

It's been one of those days. Just...off.
Mr. Moon left the house at 3:00 a.m. to fly to Ft. Lauderdale to pick up a car for a customer.
Three. A.M.
And of course he had to fly to Atlanta from Tallahassee to get the plane to Ft. Lauderdale because Tallahassee is a podunk place with shitty airline service despite the fact that it's the capital of Florida. So, yeah. I woke up when he left and told him I loved him and he hugged me and I fell back asleep and the next thing I knew it was 4:30 a.m. and the phone was ringing and I was relieved when I saw it was his number because at least if he was calling me he was alive but he couldn't find his wallet and was it by the door? Had he forgotten it? I couldn't find it and he was just about to freak out when he found it in a sort of hidden pocket in the backpack he was carrying with him.
Nothing like a good burst of adrenalin at that time of the morning.
I did go back to sleep though.
My dreams have been absolutely cinematic in scope lately. I am not even me in some of them. I am someone else. One was actually set in a different universe which was comprised of many different universes. Wish I could remember more about that one. A few nights ago I dreamed I was living in India which was my home and my parents had won a lottery and taken off and deserted me and my two sisters and I had to run what had been the family business which was renting out rooms and also, taking care of those little girls.
Cleaning was involved.
Last night, or this morning, I was in a boat traveling the coast of Africa, alone, and I had no idea how the boat worked or anything about it but somehow I found myself at a port in some unknown to me city in some unknown to me country on that vast continent and it was sort of a colonial situation and a good friend of mine from days long past was there, elegant and knowing everything I did not, and I was falling in love with wherever it was that I was in Africa.
Perhaps my brain is making up for the fact that I don't go much of anywhere or do much of anything these days, by taking me on these far-away adventures or maybe I am remembering past lives or even viewing possible future lives.
I do not know.

I did go to Tallahassee today, podunk place that it is. I went to Michael's and bought embroidery thread and a cheap artist's pen and then I went to Marshall's and bought a linen dress without even trying it on and a linen shirt without even trying it on and then I went to Publix and bought what one buys at Publix which is mostly food and toilet paper.
I swept the porches, I did some laundry, I found five nice eggs.
One of my hens has a very red butt and according to the internet it could be anything from mites to a fungal infection and no, I am not going to give my chicken Epson salts baths nor am I going to put diaper rash cream on her butt.
If it starts to spread to the other hens, I'll do something.
Something...
I guess.

I feel as if I am in a space of ennui, of inaction and the complete inability to begin anything new or to deal with anything old or to do anything, anything at all besides handling the most basic elements of life. I look at places in the yard that need attention desperately and I sigh and avert my eyes. I try to do things in the garden but after about an hour and twenty ant bites I give up and promise myself I'll get back to it eventually.

I will stop bitching now. Because that is what I'm doing. I have no valid reason for complaint and yet, complain I do. At least I'm not blaming anyone else for my seemingly static existence because that would be ridiculous. I am not stupid.
Maybe I'm just going through a period of time where my mind is trying to wrap itself around the reality of being the age I am, looking the way I do, feeling the way I feel.
Which is also ridiculous. Seems obvious that the women who thrive the most as they age are the ones who just plow right on through, refusing to put down their paintbrushes, their pens, their hoes or their shovels, their microphones or their make-up, their running shoes or their responsibilities, their spirits or their stethoscopes, their joie de vivre or their jewelry, their guts or grins or guitars.

Yeah well. Good for them.