Jessie and I made a plan to go see The Beach Bum today. First of all, I was so honored that she would want to use some of her precious no-boys time to go see a movie with her mama. Secondly, I just really wanted to see the movie.
I was, in fact, almost inappropriately excited to go see it.
We met up the big fancy new movie theater where you have to buy assigned seats which in this case was ridiculous. There were only six people in the entire theater which was showing The Beach Bum including Jessie and me. But we picked out our seats and then we figured out what our beverages and snacks would be. I wanted popcorn because that's what you get at the movies. At this place you can get a three-course meal to take into the theater with you which seems ridiculous but whatever. You can also get adult beverages. Jessie got this. 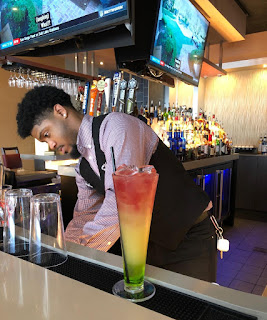 I think it was called a Honey Bee. I could be wrong. I had a sip. It was delicious.
We got a huge bag of popcorn although we passed on the Giant Dumbo Bucket of popcorn. Literally, a bucket. That you could use to haul dirt in. Or use at the beach. And I got some root beer. I hadn't had a root beer in forever. It was pretty good. One sip took me right back to when I was sixteen and worked at McDonald's. Every day for my lunch I would have a Filet o' Fish, a fried apple pie, and a root beer.

When we went into the theater we first sat in the wrong seats. This was my fault. But we moved to the proper ones. We reclined in perfect comfort and watched the previews. Always fun. Until a preview came on for a horror movie. Jessie and I both hated that. We don't go to horror movies and we didn't want to see a preview of one.
We lived.

Finally, our movie came on. After all my pre-excitement and anticipation I bet you think I'm going to say, "Dammit, it fucking sucked!"
Right?
Well guess what? It didn't.
We laughed so much. It was actually better than I thought it was going to be. Matthew McConaughey totally passes my good-actor test which is always- Can you see him (or her) acting?
I truly thought that he was going to phone this one in, using his Dazed and Confused southern-drawling stoner character and he could have. But he didn't. There were elements of that character in there but his Moon Dog had layers and a deepness that I didn't expect. I almost cried a few times. Of course, that's a low bar for me and movies.
Or anything.
And there were very uncomfortable moments. Watching a good actor portray a drunk can be pretty damn sad. He didn't just get high in this movie, he got fucked up. Or, his character did.
Now let's move on to Snoop Dogg.
Honestly, I had no idea that Mr. Dogg was such a good actor. OR that he was so damn sexy. The chemistry he had with Isla Fisher was shockingly electric. No pun intended.
Or was that just me?
He did basically play himself and I hear that originally he WAS going to play himself and his character's name would be Snoop Dogg. He, however, changed his character's name to Ray, short for Lingerie after an epiphany he had. Which was pretty perfect. Smooth as silk.
Isla Fisher was wonderful.
Jimmy Buffett can't act. But he is Jimmy Buffett.

The plot had holes in it you could sink the Titanic in. The ending was fairly ridiculous. There were many gratuitous bare breasts which didn't disturb me in the least. I do love breasts although as Jessie pointed out, most of them were fake. There were entire parts of the movie that had absolutely nothing to do with anything except the director's obvious love of the actor. Martin Lawrence's role as Captain Whack (or is it Wack?) for instance. And yet, the scenes with him in it were like a delicious lagniappe that the chef sends out to your table because he loves you.


And yes, that tangent ended up being a bit, uh, weird and National Lampoon-ish but I still loved it.

So it was a lovely afternoon, well spent with one of my daughters. If laughter truly is the best medicine, we're in good shape.
And yes, it's probably obvious that I need to get out more. Not to mention the fact that I have extremely low-brow taste when it comes to culture.

When Jessie got home she discovered that Vergil had given the boys their dinner, bathed them and brushed their teeth and had them in their pajamas.
Dinner was PB&J's with chips and salsa.
It was 5:30 p.m.
What a dad!

I got home to find my husband still working on the laundry room. I think it's all ready for the big changeover and washer delivery tomorrow.
Or, well, almost.
I don't think I've ever looked forward to doing laundry as much as I am right now.

I cleaned out the nests in the hen house today and pulled the rest of the arugula. It has not rained but the temperature is dropping. We got nine eggs from our nine hens today, and one of them appears to be a maiden egg. Getting rid of those roosters was the best thing we could have done for these sweet chicken girls.

I think the main take-away I have from watching The Beach Bum is that kissing is a beautiful thing. The Moon Dog character kissed passionately and often. He was an equal-opportunity kisser whether the kissee was a probable super-model, his wife, his male friends, or his Cuban housekeeper who was a woman of a certain age. There was plenty of sex but the kissing was the best. And the sweetest.

I think I'll go kiss my husband now and then I'm going to heat up some very fine leftovers. If you were here, I'd probably kiss you too.