How To Feel Useful

To fight the feeling of ennui and uselessness I was having this morning I texted Lily and asked if the kids would like to come over to play. She texted back that at the moment they were playing in the sprinkler and the mud and were pretty happy. But we worked it out that after mud play time they'd take a bath and come over here and so I went to collect them. I have been missing Owen and Gibson and Maggie and haven't really seen the boys in awhile.
So I picked them up and we drove on back to Lloyd and the fun began.
I offered them leftover spaghetti for lunch which they all said they wanted but Maggie immediately started playing with her new bears and went from them to another toy and couldn't be bothered to eat
and it turns out that Owen and Gibson don't really like my spaghetti (too many mushrooms, I think) although they were very sweet about it. I made Owen a peanut butter sandwich and Gibson a peanut butter and jelly. Owen doesn't like jelly. What child doesn't like jelly?
Oh well.
Then I started to make cookies because I wanted this visit to be the full grandmother experience and grandmothers always make cookies. 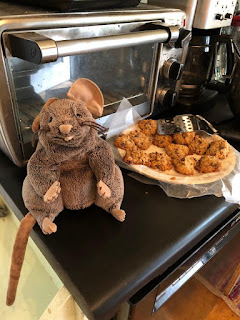 Right? As a side note, when Mr. Moon and I were in Georgia last Saturday doing that antique shopping, I kept seeing such cool old cookie jars and said that I wish we still lived in a time where it was acceptable to not only have a cookie jar but to keep it filled with homemade cookies. I love to make cookies and almost never do and of course no one around here needs endless cookie jars full of cookies. We just don't.
But I made cookies today. It took me forever because I was needed for one thing or another constantly and after about two hours of being needed I was totally over needing to feel needed and there may have been a poop incident (not naming names here) and I think that the quilt is now ready to take out of the dryer.
These things happen.
But it was fun. Owen played a Rolling Stones record (does he listen to the words? I hope not) and remembered precisely how to let the needle down gently and so forth. I didn't get any good pictures of the boys but I did get some decent shots of Ms. Magnolia June. 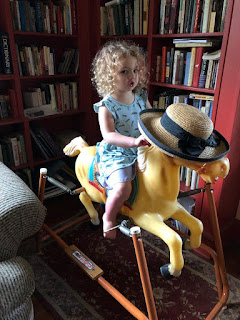 Riding the horse. Best purchase I ever made, that horse. 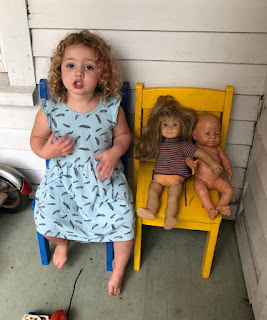 She is explaining to me that the babies need to see the doctor. 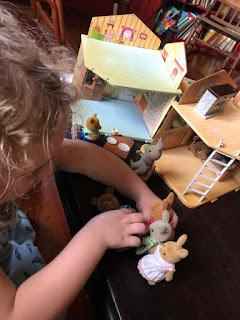 This is a little play set that I think I bought at a thrift store when Gibson was young. She spends hours with these little bears and rabbits. As you can see she has supper laid out and is intent on whatever she has going on in her mind. She speaks the parts of all of these animals out loud and I often think she's fussing but no, it's one of the babies fussing and sometimes I'll hear her say, "Mommy! Mommy!" and I think she needs her mother but it's a young rabbit or bear who needs her mommy. Or his mommy. She has named one of them "Pie" and Pie got a lot of lines today. 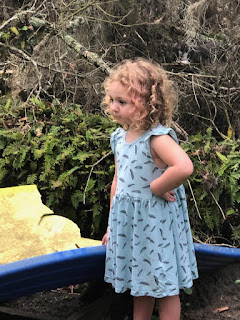 Here she is in the backyard surveying the damage the downed tree did to the slide and swings. She does not approve. As you can tell.
Can you see the pink in her hair? Her mommy did that with food coloring. Owen wanted his hair dyed with red and blue to represent the colors of his baseball team and Maggie wanted to get in on the act. Gibson actually has a little bit of dye in his hair too. These are stylin' kids.

Owen and Gibson went outside to the bamboo jungle and I let them go and play out there by themselves for the first time. I've got to let them be more independent. Owen is nine and a half and Gibson is almost seven. I warned them to watch for snakes and kept an ear out and could hear great crackings and smackings but no crying or screaming and pretty soon they both showed up with long staffs of bamboo to take home with them, quite proud of the fact that they'd managed to hit them hard enough on the ground and the fence to reduce the length to a reasonable one which would fit into the car.
No blood, no foul. All was well.

Owen wanted to go out to the garden and that made me happy, of course. He picked a few carrots big enough to eat and then helped me pick greens for our supper. He munched on some kale as we went because he does love kale. He and Maggie and I also collected eggs. Six today! That was nice. At one point in the afternoon Maggie wanted me to cook her some eggs which I did. She is getting quite good at breaking an egg in such a way that most of it goes into the bowl. She didn't eat much of the eggs but gave them to the chickens before she left and chickens do love scrambled eggs. And cold spaghetti, too.

Lily came and got her babies just about the time I was running completely out of energy. I really had a good time with them, even if it did sort of wear me out. Owen told me that he hopes I know how cool my house is.
I do.
And it pleases me hugely that he thinks that it is. I sometimes fantasize that when he gets to be a teenager who can't bear to live at home anymore he'll come move in with us and help his old Bop and Mer in their old age. I would bake him many cookies if he did.
Old Boppy and Old Mer kissed them all good-bye before they drove off. It'll be Owen driving before we know it.
I love those kids so much. They know it, too.

I know I have reported that both Viv and Vera are missing but did I also report that I've seen at least one of them in the last few days? I have no idea which one. They are identical to my eye. So either one or both of them are sitting on eggs which I would be far more excited about if I didn't already have this huge problem with all of the roosters that Dearie birthed. Hatched. Whatever.
Remember when Owen was younger and he saw little Miss Violet sitting on a huge pile of eggs and said, "She is having birth!" I like that terminology. 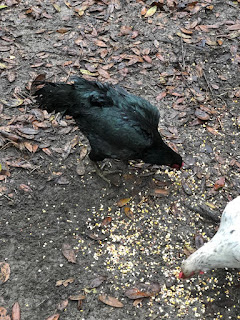 So here is Viv/Vera this morning, rushing in to get some scratch before she disappeared again to sit on her eggs.
We have GOT to deal with those roosters. They are driving the hens insane and it's not fair to them and it's just a complete disruption to the sweet, calm life of my little flock. I'm almost tempted to get rid of Ringo along with the rest of them because then perhaps all of the hens would follow Liberace into the hen house at night.
"Get chickens!" Kathleen said. "It'll be fun!"
And it has been wonderful and fun and incredibly interesting and all that stuff but it's totally out of whack right now and that must be taken care of. I would not be a responsible chicken keeper if I let this problem persist.

So that's what happened in Lloyd today. It's rained on and off and it's warm and before next week is over it's supposed to get back down into the thirties which is fine with me.
The duck is still out and now the quilt is clean and dry too. I'm ready for a little more blessed coolness before the heat overtakes us once again.
Oh, Florida. Why do I even live here? I guess I must like it.
Sometimes.