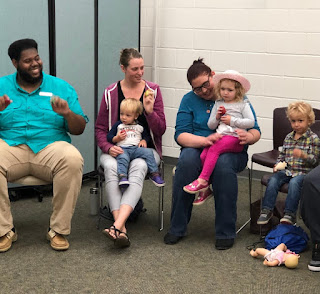 Back we went today for the Monticello library story hour. And again, it was so fun. Today Maggie joined us with her beautiful mommy and our friend Lauren. Wiley Cash was not there which was a little sad but we managed with the joy of Terez and his amazing cohort, a woman whose name I do not know and I feel ashamed about that. She reads the stories and she picks out great ones. Today's books were one about iridescence, one about Jean-Michael Basquiat, and one about Frida Kahlo. Although I am not sure that the little ones understood very much, they were all attentive and quiet. 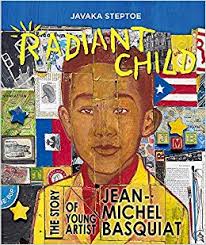 Between stories there was the parachute and the shakey eggs. And then painting. 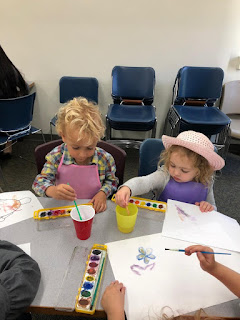 And to finish it all up, the BUBBLES!
"This is my favorite part," said Terez as he held up the little machine.
I think it's the children's favorite part as well.

And because we always do the same things we played and read books in the library after story hour and then went to our favorite lunch place in Monticello, the Rev. We ate outside and it was actually chilly. The children played with blocks while we waited for our food. 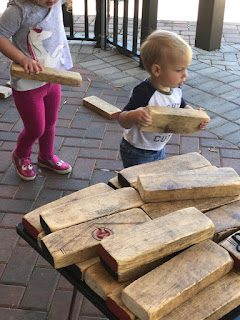 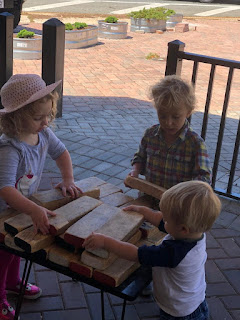 Glasses were made with Wiki Sticks. 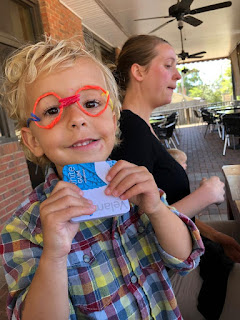 Our server was a lovely and she kept the iced tea glasses filled. We ate everything from burgers to salads to a soft-shelled crab sandwich (me), asparagus, grilled vegetables, fried chicken and french fries with KETCHUP! Such a fine little restaurant for the small town of Monticello. And as always there were lots and lots of trucks going by for Levon to love.

And then on to Wag the Dog.
Bet you didn't see that coming, did you?

I found great things today. I bought a beautiful doily that someone probably spent a year of their life making for a dollar and fifty cents. 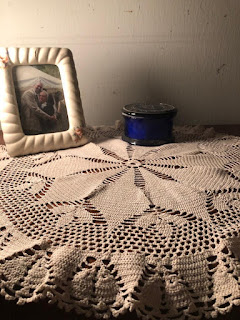 I bought a much-needed lampshade to replace one that had rips in the silk. I bought a few children's books including one by the same author who wrote Mike Mulligan and His Steam Shovel called Katy and the Big Snow. 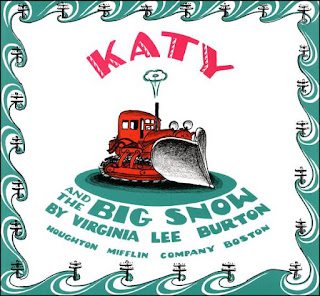 I think that Levon will definitely appreciate that one soon. He is growing up so fast! When Jessie says to him, "Oh, Levon!" he says, "Oh, Mama!" August tells him words to say and Levon repeats them back as best he can and he does very well getting his baby mouth around them.
Both Maggie and August were mostly interested in the plastic Easter eggs which Wag has a goodly plenty of now.
When we had made our purchases and were on our way out the door, I spied something that gave me a little heart-lurch. 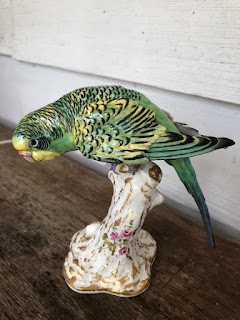 An incredibly detailed porcelain parakeet who reminded me so much of the real parakeet I had as a child and something told me that this little beauty was special. It was marked at fourteen dollars which is a fortune at Wag the Dog but I bought it and I brought it home. I did a little research and like the lamp I got at Wag, it's not worth a fortune by any means, but it's worth far more than fourteen dollars and it was made around 1936 by the Royal Worchester company in England. Isn't it pretty? It's now in a place of honor on my most beautiful piece of furniture, the vanity in my soon-to-be-again bedroom. 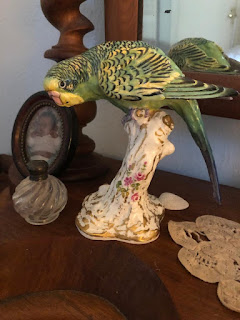 I held it up when I was contemplating buying it and literally asked myself, "Does this spark joy?" and my answer was "Yes!"

I have gotten absolutely nothing done today except to hang out with daughters and grandchildren and unload the dishwasher. I have been tired beyond reason. I took a long nap this afternoon, only waking when Maurice came and climbed on my hip to settle in with me. I don't know what's going on.

Anyway, time to put up the chickens. I have brown rice going on the stove and salmon marinating. Mr. Moon has taken chicken wings to the rehab facility where our friend is to watch an FSU basketball game with him. This is their thing to do together. My husband does not really like salmon so I cook it when he's gone. I told him on the phone that since I had no tofu, I would be cooking the salmon.
"Be sure to put cooked carrots on top of it," he said.
He doesn't like cooked carrots either.
Those are like the two things he doesn't really enjoy and I understand. I've tried and tried to make both salmon and cooked carrots in such a way that he will like them but it's not going to happen. I feel the same way about Brussels sprouts. I keep trying recipes for them that proclaim that even people who do not like Brussels sprouts will love them. I never do.
It's okay. We don't have to like everything. 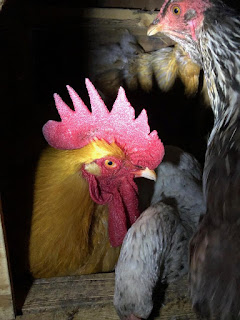 Tune in tomorrow when I might possibly discuss the differences between the benefits that chickens have brought to the human race versus what religion has given us.
You never know.