Life On Earth In A Small Way

Jessie and Lily and I have been wanting to take the little kids to the Jefferson County Library preschool story hour and today we planned on doing that. Lily woke up with painful sinuses (will this season of sickness never end?) and so Jessie and I went. I love that little library. It's just the sweetest place and I had a feeling that it would be a fun story hour and it was. We got there just as they were putting away a big multicolored parachute cloth thing that the kids had been creating waves with and it was time for the story.
Lily's best friend Kelly was there with her darling boy Wiley. I went over and gave Kelly a hug and Wiley came to say hello.
"Do you remember me?" I asked him.
"Yes," he said solemnly. He wears glasses and if there is anything cuter than a small boy with round glasses I don't know what it is.
"Do you remember my name?"
"My grandma," he said.
I only asked him if he knew my name because I wanted to hear him say that. I have no idea why he calls me grandma. Even my grandkids don't call me that but that's what Wiley calls me and I love it.
The lady who read the story was fun and personable and it was a simple book about a fox and the kids paid attention.

Next up was painting with frozen paint. YES! Frozen paint on a stick. How cool is that? 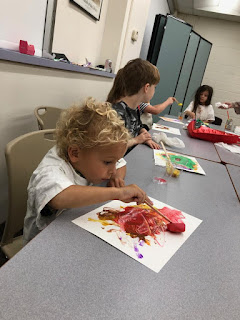 And then. AND THEN! It was time for the bubble machine.
Oh my god. So much fun. Bubbles. And beats! 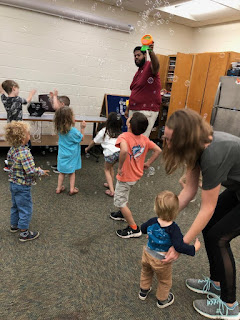 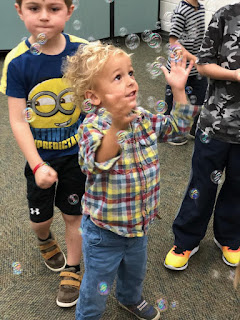 Could there be more fun?
I've spoken about the librarian and how much I like him before. I think his name is Terez or something like that. I should know. Anyway, that's him in the top picture making the magic happen. The kids loved it and so did I.

After the bubble party August did a few things on a kid computer and then we read some books, one of which was Horton Hears A Who which made me tear up. And of course it was far from the first time I'd ever read that book.
A person's a person no matter how small.
Sometimes Dr. Seuss just nailed it.
A little girl came and hung over the arm of the chair while I was reading and I loved that. I was looking at all of the kids in the community room during story hour and for some reason it just struck me how beautiful all of their eyes were. Of course kids have beautiful eyes! But it was so apparent and I kept looking down at the little girl as I was reading, her head practically under my arm and her eyes were gorgeous too.
It truly is amazing how humans have evolved to project our very souls through those windows of our eyes. And without doubt animals do too 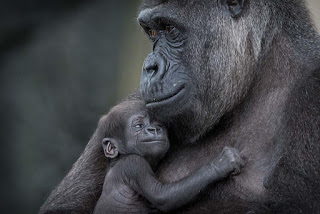 and I am quite sure that dogs and cats, who have eons of experience with humans, can read us through our eyes as easily as we can read each other. We tend to think of animals who do not have the same sort of emotional-sharing abilities with their eyes to be less-than. To be creepier. In fact, we sometimes refer to creepy people as having eyes like lizards. Or snakes. Or vultures.
But all of these children had amazing eyes. Open wide and curious to it all. The story, the painting, the bubbles, each other, their mamas, the books.

Of course after the library we were hungry and had to go get lunch where we ate outside and Levon was absolutely fascinated by the trucks. He had to point at each one that passed by and when a huge earth-moving machine went past us I thought he was going to jump out of his britches. Then we went to Wag The Dog where we found a few treasures. They had two tiny perfect rocking chairs for dolls and some sweet little bears and I bought a chair and some bears for August and for Maggie. 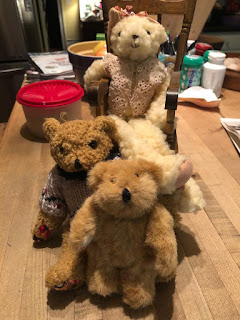 Oh, the imagining Magnolia will do with that little bear family!
I didn't find any beautiful lamps today but I did find a copy of The Yearling and one of The Secret Garden for Owen. August was most interested in all of the plastic Easter Eggs they had and I bought him a purple one.
I found a vintage silk scarf. I've washed it and it's as weightless and soft as a prayer. It's hard to pass up a beautiful old scarf. 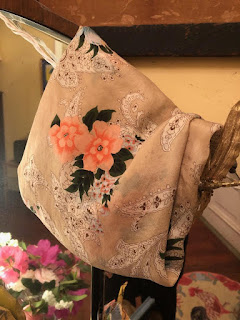 I'm sure it will come to rest over a curtain rod in a window or maybe as a wrapping for a birthday present for someone I love.
Yeah. I like that idea.

Frozen paint. Bubble machines. An entire town on a speck of dust balanced on an elephant's trunk. Trucks hauling logs and trucks carrying beer and giant bulldozers. A grandson who says, "Mer, can I tell you a story?" and another child who calls me grandma.
The eyes of children.

These are a few of the things that have made me happy today or given me pause.