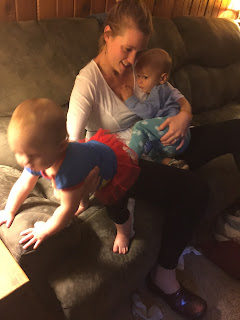 That's the only picture I got from my full wild day and I know it's not very good but it does give you an idea of how August feels about Maggie getting too close to his mama's bosom.

We were hanging out at Lily's house with Gibson and the babies because Lily and Jason had taken Owen to get a scheduled MRI and honestly, Jessie was doing me a mitzvah by hanging out with me although I think August had a pretty good time playing with his cousins. Before all of that, I'd taken Hank some venison and garden greens for him to plan some meals around. He's trying to eat all healthy and shit and I've got the greens and the meat for that. So it was a long day and they had to repeat some of the MRI sequences because they hadn't gotten clear pictures and I've just recently gotten home but Owen seemed to weather the ordeal with aplomb, and Lily reports that he even fell asleep while it was happening and he was starving when he got home.

So now I'm exhausted but have been hugged and cuddled and baby-kissed and massaged by Gibson who does a mean chopping action on the back for approximately seven seconds. I'm going to heat up the soup and make quesadillas to go with and I just made up the bed with clean sheets and frankly, I'd be happy to just go get in them but Mr. Moon is in a deer blind and will be home soon and I need to have something on the table for him to eat.

Unless I just fall over in which case he'll have to heat up his own soup and the world will not come to an end. Not on that account, anyway.

Another day gotten through.
Almost, at least.