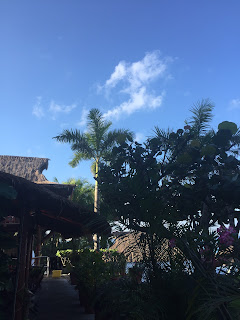 Another beautiful, beautiful day.
We've just had our breakfast. I had juevos divorciados which is two eggs on tortillas, one with green sauce, one with red, separated (divorced) by a line of frijoles negros refritos.
With, of course, pico de gallo.
Now, please tell me why when I get up at home the thought of even a yogurt makes me want to retch while I wake up here ready for hot sauce and beans.
This is a mystery but it's the truth.

This hotel has its own pets. I like this very much. The cat is named Bagheera and she is smallish, fluffy, and very well behaved. 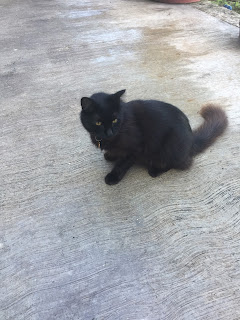 Here she was this morning after I gave her a tiny bit of cheese. She is so polite when offered treats. She eats daintily and does not ask for more. As I write this, she is lying on the lounge chair three feet away, napping as cats all over the world are apt to do.

The other pet is a little dog we met last time we stayed here. His name is Lahlo and he is the friendliest little fluff of a dog you've ever met. He likes to come in the room to say hello and last night even got up on the bed with Mr. Moon for a little scratch and snuggle. He is mostly here when the owner is here as he is her dog but sometimes he stays while she goes off to do what she must do. She is a very, very busy woman. She not only owns and runs this hotel, restaurant and dive operation but has recently opened a new beach club where they serve Tapas and drinks and a new restaurant across the street from that.

Our only plan for today is to get more bottled water. We go through a lot of it. And no one drinks the water here. No one. Besides that, I think we might drive around with our bathing suits and towels and snorkel gear and perhaps get in the water somewhere. We could snorkel right here at the hotel and who knows? We may do that.
There is such a temptation to want to do it ALL but then again, there is the heavenly possibility of doing so very, very little. I look at the people streaming by in beach buggies on tours, one after another, and I think, "Not in a million years."
But each to his or her own.
I'm not sure the couple next door goes anywhere. Mostly he swims a bit and then hangs out in a floral bathrobe. Or dressing gown. Or something. It's interesting. He and his wife read a lot and their young-women daughters are staying in a room upstairs. So far I have not noticed anyone nearly as mysterious as the Very Thin Woman who was at the Hotel Blu two years ago. Oh, the stories I could weave around her! And of course, everyone has a story. It is just easier to imagine the exotic, erotic, and magical around some people than it is others.
Appearances can be, and often are, deceiving.
But not always.

I hope that visions of sugarplums are dancing around your heads. We ourselves have purchased five packets of Chocoritas and so we are all set.