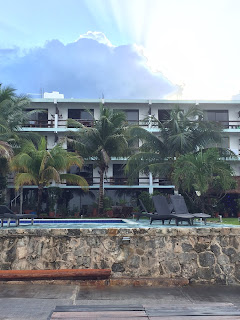 It is Christmas morning in Cozumel and a bit rainy and overcast but paradise nonetheless.
And it is truly the third day of waking up here and that day has forever and always been the most difficult for me. And then I settle in for real and all is well but I know me and how I am.
And then of course, thinking of my babies gathering to open presents but then thinking of the dreaded melancholy which settles over me on Christmas day and it feels fine to be here, even with the rain.

It is slow here at the Blue Angel this morning. Eva, the owner, wanted her staff to be able to have some time off and the restaurant is not open but there are pastries and fruit and coffee and the soft sound of voices and the shush of the waves. Mr. Moon just took pictures of a hummingbird dipping and sipping right beside him. 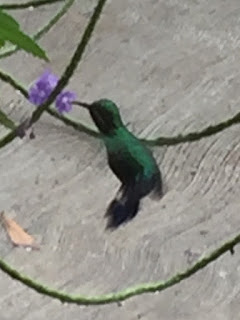 I tried to write a post last night when we came in from our Christmas Eve revels but (probably fortunately) the internet was down. Yesterday was just a beautiful day. We drove around the island, stopping in at Playa Corona where we know the owner and his wife. She was there but he's on the mainland, visiting his father. She said they were just thinking of us because their beloved old dog just died and we were there the day they got him. I still have pictures of that day. Their little girls were in their school uniforms and they were so happy to have that puppy.
Anyway, it was good to see Elsa and we hugged and hugged and we'll see her and hopefully Rogillio and the children in the days coming up.

We drove down to El Cedral which is, I think, one of the oldest place of inhabitance on the island. This may not be true but it's a pretty place, little houses in the jungle. 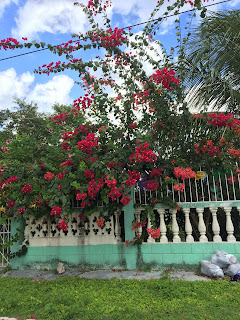 They hold a festival there every year and as with everything, we have seen it grow up. It is now a tour bus destination and there are shops and a new church where once there was just a little girl with an iguana who would let you take her picture for a few pesos.

We drove on around the south of the island to the other side, the wild side, where there is still no electricity and the water is rough and beautiful and the colors cannot be described. I tried to take pictures. They do no justice at all. 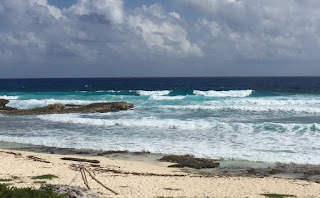 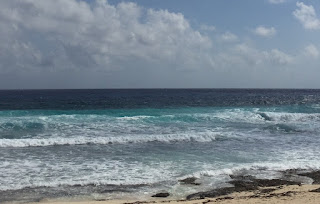 We stopped at the beach club Chen Rio 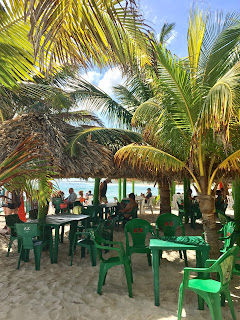 where we had what was one of the best meals of my life. It satisfied all the requirements of a perfect meal- fresh, local, in season, simple. 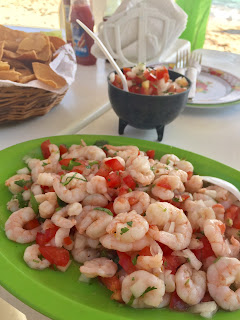 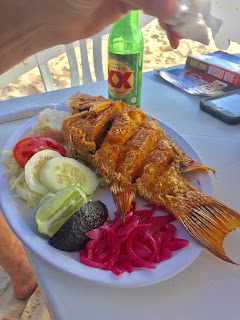 Could it possibly get better than that? We ate slowly and with our eyes closed and then we took a little dip in the protected cove beside the club. We read, we ate more, we sighed, we finally paid up and got in our little car and drove back to the hotel where we napped until sunset (relaxation is exhausting) and then we decided we'd go to town just to see what was happening and oh my god.
There's an ex-pat bar where people gather and they had tables outside all over the sidewalks and a band set up and we got a table and ordered the SMALL margaritas and the drinks got there just as the band (all Mexicans) began to crank out Cocaine, the old Eric Clapton song, and then swung right into the Stones Miss You, and it just went on from there.
I have video but hell- half those people could be in the Witness Protection Program or on the lam at the very least.
As I texted Hank though, BEST CHRISTMAS EVE EVER!
We didn't stay too long but while we were there it was excellent people-watching. The older lady in the bright orange jacket who began dancing and her husband, who looked a bit like Larry David, was so embarrassed that he had to walk away. He did come back. The young couple who obviously KNEW how to dance. The servers who kept everyone hydrated and fed. We ate some nachos and finished our deadly margaritas and Mr. Moon stopped to buy some of the toy light-up helicopters that the children love and the son of the vender who was waiting patiently with his papa gave me two kisses, unasked, which seemed like the best Christmas present ever. I had leaned over to ask his name (Pablo) and he softly kissed my cheek. He was four years old and reminded me of my sweet Gibson and when I bent over to tell him that my name was Abuela Maria, he kissed me again, just as sweetly. 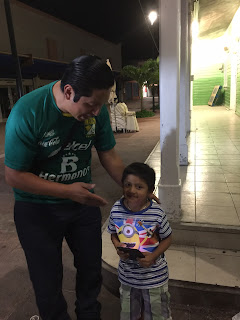 I asked his papa if I could take his picture and he said I could and so I did.

And that was our Christmas Eve and now it is Christmas morning and we've had our pastries and fruit and coffee and shared a piece of cheese with Bagheera who is the sweetest little kitty and have talked to the children and grandchildren and I feel much cheered. We may go take a rainy walk. Why not?

A slow, delicious Christmas Day on the island of Cozumel off the Yucatan Peninsula with my husband. Who knows what adventures await us?

Yours in peace and in love and in light...Abuela Maria Luna