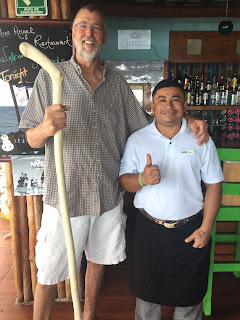 The day started like this. That's Sergio and Mr. Moon. When we walked into the restaurant for our breakfast this morning, Sergio brought out another walking stick- this one made by his brother just for my husband.

We thanked him most profusely and ate our breakfast and then we went to Mega for supplies and brought them back and got ready to go on our excursion to El Cielo which is a place off the shore at the south end of the island which you can only get to by boat. Our hotel does a trip out there every week and we went last time we were here and I would not have missed it for the world. The water was rough and it was cloudy but a few intrepid folks got onboard and we stopped at a reef for some snorkeling and then proceeded to El Cielo. 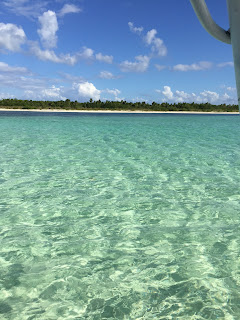 And it was. As soon as we anchored, our captain Chango turned into the guacamole chef. 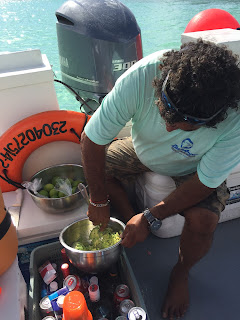 And he and Tony, the other person in charge, served us the freshest guacamole on the island with chips and quesadillas and little sandwiches and any and all liquor you might want.

Tequila was very much involved.

And it was heaven. The sun came out and we floated about in the water and rays swam by and I could have stayed forever.
Which of course, is impossible.
And so we finally had to come back in.
A rainbow followed us. 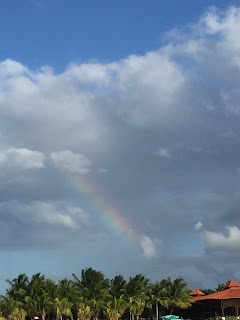 We got back just in time to watch the sunset. 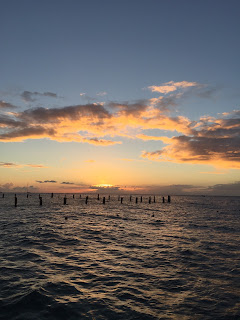 Which was glorious. And as I sat on the dock, watching it, a young man popped up right beside me in the water holding a sand dollar which he offered to sell me.
I declined, but thanked him.

And then the tiniest new moon appeared in the sky, a pequeno newborn fingernail, crisp and sharp against the darkening sky. Mr. Moon took this picture of me studying it. 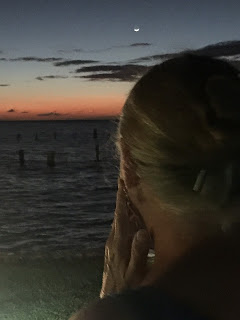 We had our supper here at the hotel and now Mr. Moon is watching the Orange Bowl on the TV and I'm about go get into bed myself and read.

And on top of all of this goodness today, we got to talk to Owen and Gibson and Lily on the phone. Owen was eager to tell us how much fun he's been having while they've been staying at our house and that he and Gibson are having a sleepover at their friend Gabe's house tonight and Gibson told me that he sleeps with his blanket every night and Lily told us she loved us and that all is well.

Hey y'all. Heaven is real.

I've been there today.
Got the pictures to prove it.