What Anxiety Feels Like To One Person, At Least

I've been okay today and went to town and had lunch with Hank and went to the library and to Publix and performed as a semi-normal human being but now the sun is going down and with it comes the crazy. I can almost feel it creeping up my feet, my legs, to settle into my belly where it lays like stone that presses against everything.
It's so hard to explain what anxiety feels like. It feels like panic, the sort of panic you'd have in a doctor's office when he's called and said you need to come in to talk about test results. It's like panic you'd experience when you get a call from the police. It's like panic you'd get before you address a crowd of thousands.
And you can't find any good reason to be feeling it.
But your mind? Oh, it can trick you. It can talk you into believing that horror and terror are all around, even as the chickens go to roost as they always do, as your kitchen is full of good things to cook and eat, even as your husband is coming home, even as all of the children are fine, and the grandchildren too.
Panic. Terror.
Anxiety is such a mild word. It's as misleading as depression.

They're doing a lot of studies and finding that people who suffer from anxiety and depression have elevated rates of inflammation and there is lots of online advice about how to decrease inflammation, to try and get to the problem that way.
I think this is backwards. I think the anxiety and the depression cause the inflammation.
I can feel it in my body.
It's the fight-or-flight syndrome, the nervous system firing off constantly, and the body, which has nowhere to go, has no idea what to do with the constant rush of hormones, of adrenalin. Sometimes it gets so overwhelming that the sufferer feels as if they are having a heart attack, a stroke. That they are, quite literally dying. Happens all the time. Ask any ER nurse or doctor. Sometimes, it just simmers, simmers, simmers, and in my case, makes me feel like my skin's on fire and yet, at the very same time, completely enervated, drained of all vitality. I want to cry, I want to slip into an unconscious state where I can feel nothing, nothing at all.
My mind doesn't work right. It's like I have just a small percentage of it to use in a functional manner. The rest is busy, buzzing like TV screens did in the old days when the signal wouldn't come in. The simplest tasks take on immense weight and seem to require planning. "Do I take the clean clothes into the bedroom before I take the hamper back or afterwards?" "Should I put the compost pot in the dishwasher or wash it out by hand?" "Should I make guacamole or just cut up avocados and tomatoes to serve with our supper?" I consider questions like this as if they were of national importance.
I remember once, before I'd ever had anxiety (but had had depression) a friend who, on looking back, was experiencing it in spades. He cried and cried because his glasses were scratched. What would he do? How could he fix that? Another time, he was completely obsessed thinking that the IRS was going to come after him, put him jail. I had no idea what to do about these problems. As much as I tried to explain logically that we could get his glasses fixed, that the IRS was not going to come and put him in jail, his agitation and panic only increased. I walked and walked and walked with him, miles of road, as he was too crazed (I'm sorry, that's the only word) to sit down, to rest.
His situation was horrible. He tried to commit suicide. He was put into the hospital so many times. He received group therapy, one-on-one therapy, medications out the yang.
He finally ended up getting ECT. I think it helped him a little bit. He's still alive. He is a shadow of his former self. It is the saddest thing in the world.

Well. Soon it will be time to go to bed again and I can almost always sleep. If I lost that ability, I couldn't abide it. And this is not so bad. I've experienced so much worse. Writing about it helps and makes me feel more normal. If I can talk about it, if I can describe it, then it loosens its hold on me. It seems a little less big. A little less frightening. 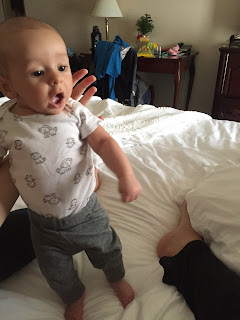 Here's a picture that Jessie sent me today. August wants to stand now, just like Owen did when he was a baby. I can't get over how much he's changed since last Wednesday. I mean- this is ridiculous! I wrote Jessie today and said, "You've been gone for a year."
It seems like it.

I look at that picture and I am soothed. I think about Owen yesterday and the conversation we had wherein I finally came to understand just how old he thinks I am. He was convinced that when I was a child, we didn't really need roads because we had no cars. That my toys were probably limited to baby dolls and marbles. That our food was completely different from what he eats. I told him that basically, things weren't that different except that we had no computers or smart phones but that we did have phones and TV and electricity and yes, cars and even airplanes. "Jets?" he asked. "Yes, jets," I told him. That we had potato chips and coca-colas (this stunned him!) and stoves and ovens and refrigerators. Thinking about this amuses me and soothes me. The chickens soothe me. The making of a meal soothes me. The accomplishing of small tasks reassures me. The idea of bed and a book soothes me, comforts me.

And I go on.
As do so many of us. Maybe you too or someone you love.
I think I will just cut up the tomatoes and avocados. I think. I'm not sure.
And so forth.

Much love...The Extremely Old and Often Unsettled But Not Entirely Insane Ms. Moon