Boys And Dogs And Cats And Another Day 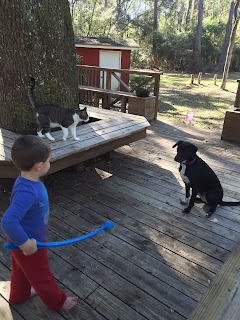 Gibson doesn't like me to take his picture AT ALL so I had to sneak this one in. He's about to throw the ball for Greta who is staying with Lily and Jason while Vergil and Jessie are in Boulder. And Parker the cat is in there too, so except for the fact that you can't see Gibson's face, it's a fine photo of a boy and a dog and a cat.
Later on, when I took his picture while he was riding the big wheel, he said, "You anger me!"
It's like everything he says comes from movie dialoge but he uses it all quite correctly.
He cracks me up.
He and I picked up Owen from school today and then we went to the Lighthouse Children's Home and the boys picked out toys. They no more need any more toys than I need pants that don't fit but what the hell? It's a cheap thrill. Gibson got a Buzz Lightyear and Owen got a Stuffie. That's a stuffed animal with all sorts of pockets and hidden compartments in it. He loves it. He named it Claire which is the name of the girl he had a crush on in Pre-K. We are not sure if it's a hippo or a pig. Whatever it is, it's pink and he adores it. There's a pocket hidden in the tongue! Enchanting! Gibson was trying out all the features on his new Buzz on our way home and Owen said, "Good choice, Bro!"
Those boys.
When I was still at the house with just Gibson, he was playing with some Star Wars toys, C-3PO and R2D2, to be exact.
"They best friends," he told me.
"Who's your best friend?" I asked him. He looked at me as if I was insane.
"Owen."
"Of course," I said. "Who's Mer's best friend?"
He pondered for a moment.
"Maurice?"

And it's Maurice and I alone again tonight. Mr. Moon is on his way to Orlando for work.
I haven't been able to shake my anxiety all day, even with my boys. I hate it when my emotions get in the way of my gratefulness, my enjoyment in this life which is so precious, so fine. It seems like a sin not to be able to accept this which I have been given, which I have been so graced with. My god. I have everything from hot and cold running water to diamonds and chickens and grandchildren who say, "Thank-you, Mer!" when I wipe their butts. I have oak trees and fresh greens and my dream house. I have a husband who loves me and shows it. I have kids who never, ever end a conversation with me without telling me they love me.
I have more riches than 99.9% of the people on this planet, living or dead.
And I know it.

Well, maybe tonight I won't dream of tidal waves and having to save children from them. Maybe my brain, my demented brain will neglect to come up with some new fresh hell and let me rest in peace.

I hear either dogs or coyotes yipping off in the distance and I have leftover ropa vieja to eat on corn tortillas with avocado and salsa. I have hundreds of books to choose from to get into my cozy bed with. I have my best friend, according to Gibson, to cuddle up in bed with me if she so chooses.
Which looks like this. 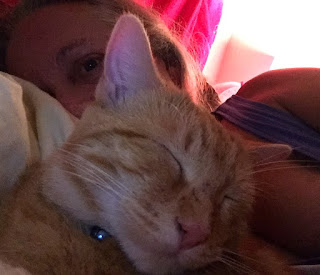 I took that picture a few weeks ago.

Here's hoping I get my head out of my ass as soon as possible.

And oh- by the way- I'm grateful to all of y'all too. So much you have no idea.
I am more than aware that I am not the only one who goes through this shit. And while that makes my heart break, it gives me hope that together we can share it all and know that we are neither alone nor ungrateful insane people.
We are, in fact, supremely and abundantly and most definitely human. 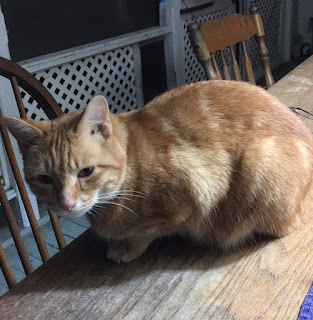 Love from Ms. Moon and a Very Fine Friend.