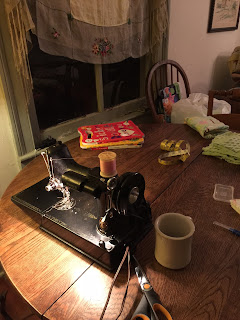 It has been a good day, one where I finally got the old Singer out and cut and tore the flannel for the newest baby quilt. I've had the flannel out for ages, flannel that I bought years ago and used in some of my children's quilts. I shopped and shopped for new but I can't find any prints I like. It's all damn Disney and Hulk prints and what I want is flowers. But it turns out that the flower print I had (which I think actually used in Lily's quilt) is in pink and green which are the colors that Lily is using for her baby's room. So. Fate.
I also had some beautiful pink corduroy, fine ribbed and light, soft as the flannel and I am using that as well.
It feels good to use the scissors, the old machine which gives off the smell of oil and dust, the iron to flatten my seams.

My neighbor, the young man who bought the house next door knocked on my door this afternoon, holding Elvira in his arms. She had strayed into his yard and couldn't seem to find her way back home, so he caught her and brought her back.
"Oh, Elvira," I crooned, taking her from him. "What have you been up to?"
I think I crack this guy up. It's so funny. When I'm around him I turn into this stereotypical old southern woman and I swear- my accent actually deepens. I have no idea why I do this. Am I still an actor at heart, playing to my audience?
He may well read this blog. I know he's very interested in everything about Lloyd and although I am not sure, I have a feeling that if you google "Lloyd, Florida" you may eventually find me.
Nope. Maybe not. Perhaps I merely flattered myself. I just googled Lloyd and if I'm there anywhere, it's buried pretty far.
But he asked to see my garden and I showed it to him and before I knew what was happening, he was pulling mustards and collards and arugula to transplant into his garden. He may have asked, but if so, it was not exactly clear on my part that he had permission. Oh well. My greens do need thinning. No doubt about that. And he didn't take many and I pulled some for him myself.
And after all, he did bring Elvira home.
He is very, very interested in planting and nurturing that which is native in his yard. We had a little discussion about "native" versus "traditional" in North Florida. Of course there is indigenous and there is invasive too. I told him that there was a plant in my yard that I've never been able to identify (and not that I've really tried very hard) and he took a picture and sent it to a friend of his who immediately texted back that it is tetrapanax papyrifer, also known as rice plant.
So now I know and am grateful for that. It is used in the making of rice paper or, according to Wikipedia, known more accurately as "pith paper."
Perhaps one day I shall be bored and inspired enough to try my hand at making pith paper but that will probably happen after I become bored and inspired enough to make soap from the ingredients that used to belong to Kathleen.
Sigh.
In the meantime, I am making this baby quilt and it is as imperfect as the baby's grandmother is, but cheerful and the right colors.

My husband has texted me that he is packing to come home tonight. He is a most happy man, I think. Not only did he get a buck but he also bought a car that he's been wanting and looking for for over a year. Someone up in Tennessee bought the car he drove up in for his son and Mr. Moon will be driving the new (previously owned) one back home.
This is Mr. Moon's life. I swear to god, he is the luckiest man I've ever known although he puts in the work to make the luck happen.
Sometimes when I find myself feeling low and useless, I remember that of all of the women in the world he could have married and had children with and made a family with, he chose me and so perhaps that means that I am a bit of a prize too, but then I always remember how kind-hearted he is and how he does love to take on a project and I don't feel quite as sassy about the whole thing.
God knows I have been a project that only a kind-hearted person would take on.
And he is my luck. Of that, there can be no debate.

All right. Back to the quilt. It's supposed to get down into the forties tonight. Perhaps this means my cat will sleep with me. One never knows. When she banged against my window in the wee, early hours last night, I refused to get up and let her in. She can get in through a cat door and she knows it but I think I pissed her off because I found her this morning inside the house, indeed! inside my room! but sleeping in a doll crib that my sweet father-in-law made for his granddaughters. She looked at me like, "If you wanted me to cuddle with you, you'd have let me in. Bitch."

Well. I suppose she was right.