A Highlight Of My Life Day 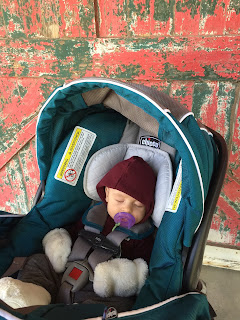 August's first official photo by the old train station door at the Lloyd post office. He was sleeping. You put that boy in his seat and set it in the car or the stroller and he nods right off. What an agreeable child! When we got to the post office, two ladies were outside chatting and when they saw that there was a baby they immediately straightened up and said, "Now what do we have here?" And so we had to show him off and they determined that this cold air might not be good for him (it was probably about sixty degrees) but they admired him as Jessie and I beamed.
Oh. The Grandmother Club. It's a fine club to belong to.

So. I had one of the most sublime experiences of my life today. I am not even kidding you. My darling daughter Jessie watched the Keith Richards documentary Under the Influence with me. The whole thing. She has no idea how much I appreciated that. And for a great deal of it, I held August in my lap and he watched it too and seemed to be pretty happy about that. And then, if that wasn't enough nirvana, she gave me a back massage as we watched, August happy on the floor on a quilt that his great-great-Aunt Elizabeth had made for Mr. Moon out of pieces of flannel that she'd used in making shirts for his daddy. 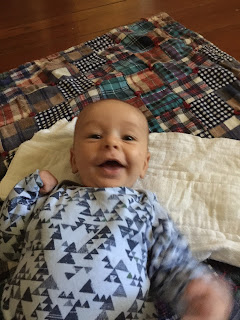 Greta, who was visiting too, laid down beside August and tolerated being kicked and batted with great patience. 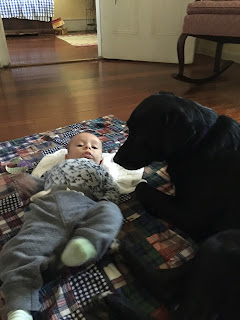 So yeah- today was quite simply amazing and not one that I ever could have possibly imagined when I was a young woman.

And the men. Those men.
They worked on that roof all day long. From as soon as the roof thawed out enough for them to stand on it until dark. The only real break they took was when they came in and ate that breakfast.

After we watched the documentary we strolled August down the sidewalk of Lloyd. We got barked at by various dogs and greeted the No Man Is Lord guy and Greta came with us on her leash, tail up and behaving herself perfectly, even when the little yip dogs came out of a fence to let us know that we were not allowed on their property.

At the end of the documentary, Keith talks about family. He says something like, "Having children is one thing but when your children have children, it's something else. It's a feeling of accomplishment maybe? Or continuation? Ah, it's all about love."

Here's a picture from last summer that I took of Boppy and Gibson and Owen by that old station door. 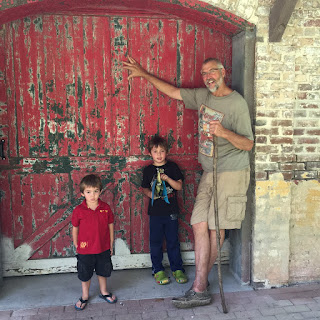 And the beat goes on.

"I never could have imagined," I told him.
He smiled as if he already knew that.

I think he probably does.