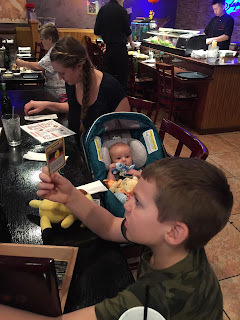 We went to the Japanica! today. Owen asked me if I was going to get my usual "jalapeno bean box." He meant curried tofu Bento box but that was close enough. I did not. I got the curried shrimp Bento box. It was excellent! Owen, as usual, ate his weight in miso soup, salad with ginger dressing and sushi. So did Gibson. August watched us all and had a little nursies.
It was great fun. 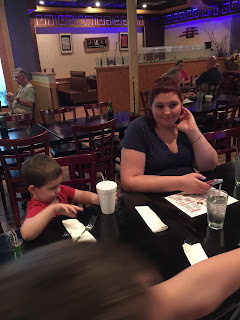 Then we went to the dreaded Walmart because Jesus, we're stupid. But I wanted to get Gibson a new big-boy booster car seat for my car and Lily wanted curtain material and so did Jessie.
August had a great time at Walmart. Owen is enchanted with entertaining Baby August and he kept him smiling most of the time. 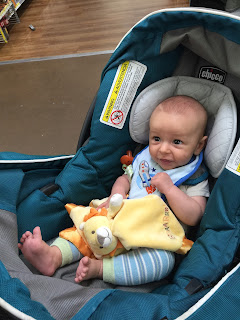 Look at those toes.

And I found this fabric. 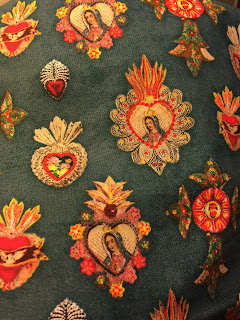 Why did I not know that they make Virgin of Guadalupe prints? Huh? No one told me. But there it was and I bought two yards. Perhaps I will make some curtains too. I don't know. But I had to buy it.

The boys were completely done after that and so were the rest of us.
"MerMer's house!" they demanded and so to MerMer's house we came where that damn cat is still hanging around and he has threaded himself around and around my legs and seems determined to stay. I told Mr. Moon that his name shall be Jack as in "Hit the road Jack and don't you come back no more."
I do not want this cat. I am not kidding you. I don't want to pay to get him neutered, I don't want another animal to take care of. And yet- what do I do? I know the shelters are overrun with cats now. I suppose I'll call both the Leon County and Jefferson county Humane Societies tomorrow to see what they suggest. He is not feral. He is too friendly. Neither of the other cats wants a thing to do with him and I don't blame them. They barely tolerate each other.

Well that's enough drivel.
I have bored myself. But at least there were pictures.
I will try to do better tomorrow.