Sometimes Too Much Is Just Enough

On top (this is a pun- stay with me, here) of everything else that was going on yesterday- the rehearsals, the snack buffet, the grandchildren, the diaper changing, the game playing, the cuddles and coos and naps, Mr. Moon and Vergil began work on our roof. (Did you get the pun?)
As giant sheets of tin hit the ground, I said to Lis, "I should have planned to be at the beach while this was happening."
"Why?" she asked me innocently as another tin bomb hit the ground.
I have no idea how those guys managed to get one song rehearsed, much less an entire set list.
But they did.
Here's how they looked last night: 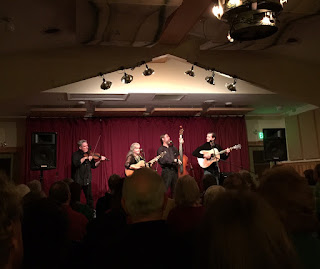 It was magical. At one point, my other Liz leaned over and said to me, "Can you believe we know these people?"
It was one of those nights that I was so blown away that after the last song had been played, all I could say to Lis was, "I can't talk to you."
This is what happens when she's gone over and beyond anything I can imagine ever doing that I feel to shy to even be in her presence.
The woman with whom I was making lunch with only a few hours before had become a magical, sparkling goddess whose voice soared and dipped as she sang the songs she wrote, as she played the guitar (she's an amazing guitarist), as she was simply amazing.
The whole band is amazing. Such good people. And at the center, Lon and Lis who have been sharing their life and their music together for forty years. I noticed how, during certain songs, couples in the audience would reach out to each other to find a hand, to slip an arm around their own true love.
Yes. Magic.
And no, I can't believe I know these people.
I talked to Lis just a few minutes ago- she's already across the state, about to start singing again at 12:30 this afternoon after driving back last night.
I told her I was still feeling shy. She laughed. She said she she always knows it was a good show when I tell her I can't talk to her.
It's true. 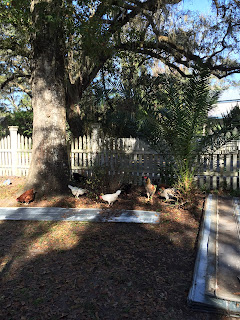 And this is what's going on this morning. Mr. Moon is waiting for Vergil to show up with materials to begin work on the roof again. Meanwhile, he's out doing something with a hammer. The guy next door is working on his house too, so Lloyd is busy and noisy this morning.

I've taken the trash and have laundry going and I think I'll go weed my garden. I'm overdue for some dirt-worship. The chickens are pecking around and the sky is cloudless and it's supposed to get up to 81 today. So weird.

It's been a busy and wonderful weekend and despite the busy-ness around here, the noise, the activity, there is still a sense of peace and I am grateful for it and now Vergil is here and I've gotten a request for a to-go order for the roofers of sandwiches made with Tennessee sausage and Lloyd eggs and cheese.
It's nice to be needed and god knows I'm not getting on that roof. I think I've used up all the luck I'm due for awhile, just being fortunate enough to be part of this whole crazy thing. Our friend Gabe, the guitarist on the right in that picture at the top said of our house yesterday, "Love is just flowing in and out of all the doors and windows."
I think that sometimes love goes with the crazy and with the magic as well. At least it does around here.

May some of all of that grace you too.