Well. The Tree Is Done 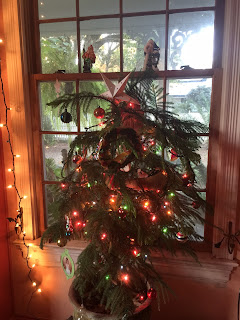 The Christmas tree of a holiday-hating mad woman.
Owen helped me decorate it. I told him the story of the old ornaments that I use as he unwrapped them for me to put on last year's Norfolk Island Pine which is still, amazingly, alive. The Chinese couple in the little canoe that I put up to sail us safely into the New Year together, 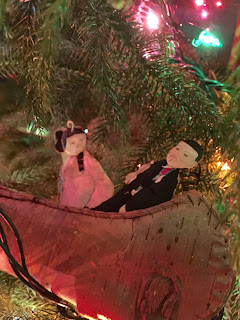 the ornaments the kids made me when they were in Brownies or school. 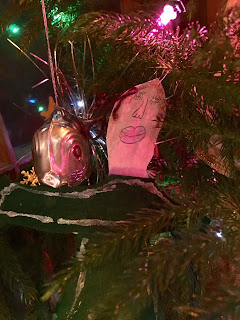 The vintage ornaments that I scored at a Goodwill years ago for nothing. 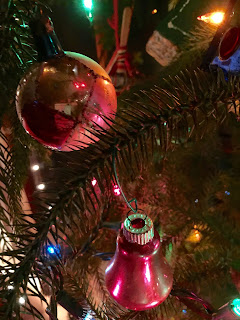 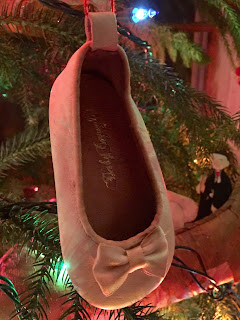 Or perhaps it was Jessie's.

After we were done, he wanted to make a Christmas craft.
"I don't really have any craft materials," I said.
"Do you have paper?" he asked me. "Scissors, crayons, tape, a string?"
"Well, yes."
"Then I can make a Santa necklace."
And he did.
I drew the Santa which looks like a terrible rendering of Boppy dressed as Santa and he colored it and cut it out and I poked a hole in it and put a shoestring through it and Voila! a Santa necklace.
Here's another thing he did. 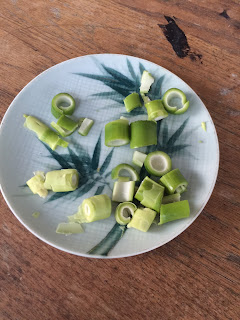 He'd been outside with Greta and I heard him in the kitchen, getting out a plate, cutting something up. "What are you doing?" I asked him.
"Nothing," he said.
And then he presented me with that- a snack of bamboo on a plate with bamboo on it. Yes. Sigh. Bamboo is coming up already. Or at least one bamboo in the camellia bed has sent up a bright green, sturdy shoot.

I tasted it. I wish I hadn't. I think the taste of bitter will always be in my mouth. But oh- that boy.
He is sweetness personified. 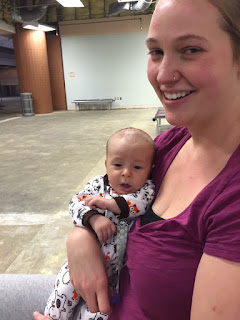 The Weatherfords have arrived safely back in Tallahassee. Mr. Moon picked them up and they are going to go get some supper. Unfortunately, none of their luggage arrived. None.
Oh well. Even the airlines couldn't fuck up the transportation of the nursies so they'll survive. But Jeez! Sometimes I think it would be easier to walk across the country than to fly. Okay. Not really. But you know what I mean.

And tomorrow I'll get to see them, hopefully, and get my hands on that boy, that little travelin' man. Nine weeks old and he's already traveled from Tallahassee to North Carolina and back and then to Boulder, Colorado.
Owen keeps reminding me that he's never been on a plane.
"Talk to your mother about that," I tell him.
"She said to talk to you."

And so it goes. Some of us travel far, some of us can barely manage to travel to the post office, while unwrapping Christmas ornaments takes us so far back in time that we can't even believe it.