There Is Absolutely No Cohesiveness Here

I know, I know, I know!
We've all been suffering from LOA around here. Am I right or am I right?
What is LOA? Lack of August, of course.
So here you go. 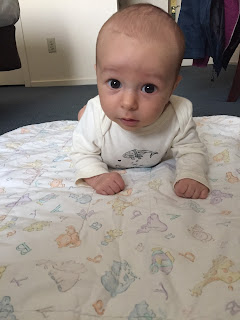 Oh August! Stop it with that little face, that adorable little face with those big brown eyes! You are killing your grandmother here.
Here's another. 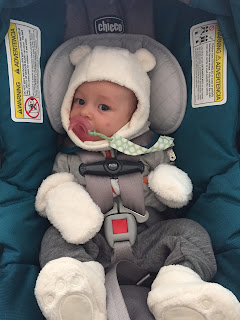 The little snuggy bear in Boulder. Jessie and I found those bear-booties, those little mitts, that little polar bear hat when we went shopping last week. We had to buy them. We did buy them. I am so glad.

I have a theory that in sharing pictures of my grands frequently, you will all become bonded with them and thus- my grandchildren will have loving allies all over the world. I mean, you see a cute baby and you're like, yeah, that's a cute baby, but when you see that cute baby all the time, you start really recognizing them. And when they grow up, they may have their own blogs and if they want to travel to oh, say...England, they will blog about it and one of you from England will step up and say, "Oh please, Owen! (Gibson, August) you must stay with us!"
Do you think this could happen?

Okay. To be quite honest, I've never had that thought before in my life. I just came up with it. But it's a good theory, right?

So. When my brother was here, he told me that he'd had his DNA tested. Since we are brother and sister from the same mother and father, I assume that mostly we share DNA. Of course, I could be completely wrong about this. Anyway, to make a long story short, most of our ancestors came from either Scotland or England. Only a very, very tiny percentage came from from anywhere else and there was NO African or Asian or anything more exotic than Irish and it left me feeling weird.
I'd always felt as if I was a mutt. And after a lifetime of being told that I cook and dance (well, I used to, anyway) like someone with at least a little bit of African heritage, I feel devastated to find that the no, I do not. But wait- aren't ALL of us African if we go back far enough? Aren't we all the sons and daughters of Lucy? And goddam, it, the bagpipes don't stir a darn thing in my soul but a blues guitar riff certainly does. And haven't I always said that B.B. King was my daddy?
Which would I rather eat? Collard greens and sweet potatoes or haggis?
Is everything I'm writing here racist?
I have no idea.
I certainly hope not.
It's so confusing.
Well.

I have no idea what brought that on. It's Sunday. I've been ripping out stitching for hours.

So here's another thing: Jimmy Carter's last scan revealed no cancer and I am thrilled for him. And happy that we'll get to keep this precious man among the living for awhile longer. But all over the Facebook, people are posting "God is SO good!" as a comment to this news.
I just don't get that.
It seems to me that if GOD cured him, then didn't GOD give him the cancer in the first place? So, maybe GOD gave him cancer and medical science cured him. Isn't that more logical if you have to bring a Supreme Being into the picture?

Again. It's so confusing.

Well, it's been a good day, despite the stitch ripping. I've been listening to an audio book called The Long Way Home by Louise Penny. Turns out that it's the tenth in a series of crime novels about a Canadian guy named Armand Gamache and it's the most intellectual crime novel I've ever read and I wasn't even aware that it was a crime novel until well after I'd reached the middle of it. It is NOT seat-gripping, but it's interesting and there's a lot of art in it. Good characters.
I've been in a dry place with books I read with my eyes. I tried to read Jim Harrison's novel, The Big Seven, but I laid it down. I'm sorry but any book that has a main character who is a hopeless drunk over the age of sixty who keeps finding himself being unwittingly seduced by nineteen year old girls is not a book I can fall in love with. So last night I cracked open a copy of the ancient Couples by John Updike which I read and loved about a million years ago and I don't think I can do this one either.
Penis, penis, penis.
Sex, sex, sex.
Don't get me wrong. I like both of those things.
But Jesus god almighty. Give it a rest for a paragraph or two.
Okay. Maybe I'm just too old and the wrong gender. I mean, I could read anything by Updike and be enchanted by the language and I actually recall some of the phrases I'm reading from when I read the book decades ago and they certainly still stand up in the literary sense. Updike was a giant but he was such a writer of his time. Is that a bad thing or a good thing?
Were the early sixties really the way he portrayed them in suburbia? Because if they were, those jacket-wearing, cocktail drinking, nine to five people put the dope-smoking, long-haired hippies to shame. We were like Puritans compared to those people. Who the hell raised their children while they were bonking their neighbors' spouses and getting drunk out of their minds and trying to dance The Twist?
Fuck if I know.

All right. That's enough. And more.

Mr. Moon put his new smoker together and he's trying some pork chops in it tonight. He's like a kid with a new Christmas present. I'll let you know how it goes.
And by the way, we're also having sweet potatoes and collards for dinner.
No haggis. God forbid.