Now how do I do this? I certainly don't intend to write a forty-page blog with pictures and stories of every moment of our trip.

"Here's where Ms. Moon has her face pressed to the window of the airplane, her shoulders shaking with sobs as she catches the first glimpse of her beloved Cozumel..." 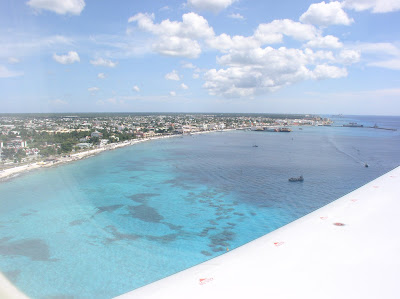 "Here's the restaurant where Mr. and Ms. Moon always take their first supper and where the waiter greeted them with the words, "Welcome home." 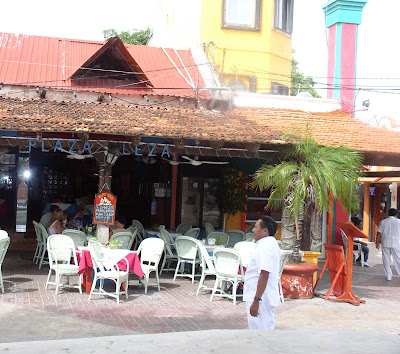 Nah. That would be boring as hell.
So I don't really know how to do it. How to relate pictures and words and integrate them into my life here back home but I guess I'll start out by saying today is a slow one. I feel almost as if I am withdrawing from a drug. My brain isn't fuzzy, exactly, but I'm not quite here, although in some ways, I am certainly here.

The schedule today called for laundry (ten days, ten GLORIOUS days of doing no laundry whatsoever will catch up to you, believe me) and also, for mixing the chickens. The babies weren't exactly busting out of their little nursery pen, but sort of so today was the day.

I took cut-up watermelon out to the pen and sweet-talked the hens while Mr. Moon put the babies out, one by one and yes, there were problems. The big gals wanted to show the little kids who the bosses were and that meant some swelling up and chasing and bowing up and bumping of chests and even pecking at a head or two, but we were right there to diffuse things and overall, it went well. No blood, no foul, and we are keeping our eyes on them right now.
It does seem quite obvious that Henry is a rooster and he did a fine job of protecting his flock of eight. He counted coupe (no pun intended and not even noticed until about my third read-through on this) on an aggressive Miss Bob and seemed as shocked as she was when he actually found himself with one of her feathers in his beak.
A storm came in and Mr. Moon and I sat in the coop with them as the rain beat down on the tin roof and everyone seemed fine. I felt completely content to sit and watch them as they huddled up together in two different groups, occasionally picking a vermin of some sort off another chick, grooming themselves and just generally watching the rain fall.

And so what I've done mostly today is watch the chickens, do laundry and talk to my children.

I had no chickens in Mexico to tend, of course, but there were iguanas. I do love the iguanas. There was one at the state park which was so big it was almost ridiculous. I'm sure he has attained his size from the eating of nachos and tacos. I saw him casually stroll up to a tourist and say, "Hey, you gonna eat that plate of food because really? I'd like it." And then the tourist gave him the food and everyone stood around and took pictures, including us and I thought for sure he was going to put his paw out and demand pesos for the pictures but he didn't. We'd all have paid if he had because he was that big and that imposing. Here he is: 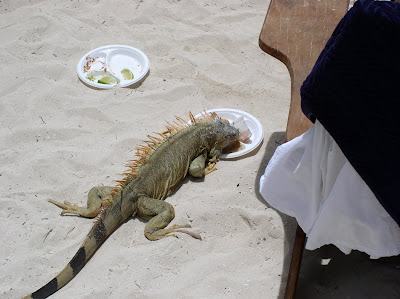 Of course you don't have to tend iguanas unless you're like that guy who had a pet one right near where we parked our scooter when we went to town every day. That was a fine iguana who allowed himself to be stroked which I enjoyed doing, believe me.
I don't have his picture. Sorry.

But there are iguanas all over the island. We drove in one afternoon to the place we were staying to see two of them resting on a grate thing by the driveway. Here's the bigger one's picture: 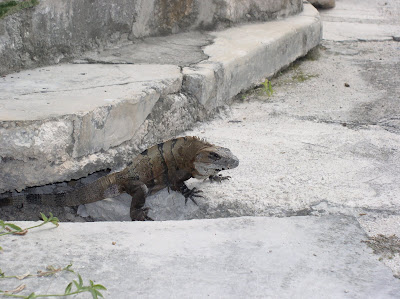 As you can see, he is a fine iguana but no freak of nature. I love how they look at you. They don't have a huge vocabulary, as far as I can tell, and it mostly consists of the words, "Fuck off!" in Iguanaese. At least that's what it seems like they're saying to me.

I also didn't have a garden to tend in Mexico but there were plenty of beautiful gardens and plants to admire and I sure did. Here are a few bananas growing in the gardens of Cozumel Caribe, where we stayed: 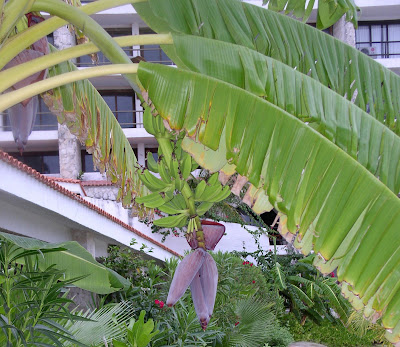 We went to a park where they have a little replica of a Mayan home and garden and I loved that garden even though there wasn't squat growing in the beds. This is what it looked like: 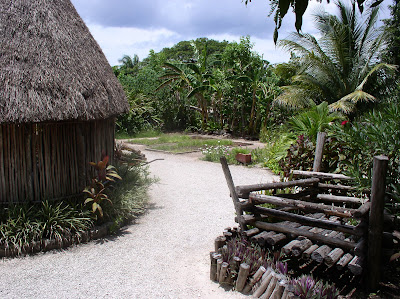 I was enchanted and felt right at home and could easily imagine my own little place in the jungle with my own little garden with tomatoes and peppers and cilantro and perhaps even corn. Why not? And chickens. Of course chickens. I wonder if iguanas eat chickens. I'll bet they eat fried chickens, given the chance, even though I think most of their diet is based on fruit and insects. I'm pretty sure that iguana in the park would eat a fried chicken. All. By. Himself.

I was hunting today in my garden to see if I had any watermelons growing off the impressive vine which has showed no signs of producing fruit at all when all of a sudden, right in the middle of the words, "Nope, no watermelons yet," I had to alter that sentence to add, "Except for this fifteen pounder right here."
Yeah. There it was. A big ol' watermelon and Mr. Moon and I thumped it and pronounced it almost ready although of course, we're as clueless as anyone when it comes to actually being able to test for a ripe melon and you just hate to fuck it up when you grew it and it might be the only one the garden produces. We're going to let it sit for a few days.

I have flowers blooming that I didn't have when I left and the crazy pinecone lillies are making their crazy pinecones and all the begonias are alive and so are the front porch plants. My kids did a great job of keeping things alive. I'm impressed.

I'm also impressed with the heat and humidity here at home. It was hot in Cozumel, do not get me wrong. But there was always a breeze. Those Mexicans know how to build things to create a breeze. There's no breeze in Lloyd today and although it cooled off a little bit when it rained, it's now more of a sauna than it was before. Mr. Moon's been working all day, cleaning up the truck that our son-in-law is about to take possession of. He wants it to be nice, not only for Jason but because our grandson is going to be riding in it. That's Mr. Moon. I miss him today. We've not been this far apart for so long a time in days and days. We're within earshot of each other but that's not as close as we have been recently and I suppose that's "real" life.

And we've jumped back in to real life, chickens and laundry and cars and all. Lily and Jason are moving this week and so is Jessie so there's that. And life goes on. It went on while we were gone without us and now we're back and we need to participate. And we want to. It's good to get my feet back in the black dirt of Lloyd, to appreciate ancient oaks and and to admire the clean floors of my beautiful house.

But I tell you what- it's way past siesta time and my body knows it. Lie down, it says. Close your eyes knowing that the water is right outside the window and will be there when you get up. Where's your husband? Make him lie down next to you. Take a little sleep in the middle of the day. It's good for you.

Well. Not going to happen.

And here we are and I've wandered and I've muddled through this like a time-traveler, a demented woman with her feet in one place, her head in another, her heart in all sorts of places.
I'm exhausted.