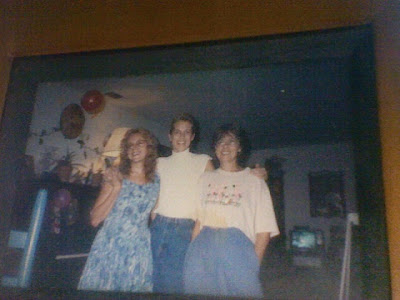 Ms. Maggie May posted something recently which was so beautiful- which is not unusual. But in this post there was a picture of Helmet Newton's wife with her breasts exposed and they were absolutely beautiful.

Go on. See that picture, read that post here, if you haven't already.

Worth it, wasn't it?

Anyway, those breasts reminded me of my friend, Sue, whom I have written about before. Her birthday just passed recently- a day before mine- and she died fourteen years ago.
Fourteen years ago.

She died at the age of forty-four and so she would be fifty-nine now, had she lived, but Sue wasn't meant to live out a long life. Life had been hard for her. She was too sensitive, too smart, too apt to fall in love with the wrong man and then be amazed when he left her. Amazed and taken under like a drowning pirate, like a mermaid brought to shore without lungs, only gills.

That was Sue. My Sue-Sue. She's the one to the right in that picture taken about 1986 so forgive us our trespasses in wardrobe and hair-styles.

You can't tell from that picture but Sue's breasts were about the most amazing things I'd ever seen. They were perfect breasts. Round on the bottom and roundish on the tops- oh. Those breasts cried out for a palm to cup them. I don't care what your sexual orientation is, there is something about the shape of a perfect roundness which makes you want to cup it. Have you ever carried a watermelon in your arms? Have you ever held a newborn's head in your hands?
Well. That was Sue's breasts.

I always teased her and said, "When I go to the plastic surgeon, I am taking you with me and you are going to have to show him your bosoms and I will say, 'These are the ones I want.'"

But she was so modest, my Sue. She called chicken breasts chicken bosoms. Seriously. She did.

We would meet every Friday at Happy Hour at a local bar where children and dogs were not only allowed, but invited. There was music and dancing and outdoor fanciness and every Friday, my husband would say, "Sue- come on. Just unbutton one button. Come on."
But she never would. She would giggle and say, "Oh. Glenno." But she wouldn't give him the slightest view of those perfect breasts.

And then she got sick. And then, she was dying. And on the day she was dying we gathered around her- her friends, her loves. She insisted that she had to move into a different apartment and her dying was so quick that the moving occurred on the day that she died. While her parents and other friends moved her furniture, a few of us, people who had known and loved her forever, gathered around her bed and held her as she died. There was me and that other woman in the picture and an old, old friend named Chip, and Mr. Moon. Glenno, as she called him. And we held her and at one point, she took Chip's hand and placed it on her breast and I will never forget the way his face looked, his hand on her bosom, his eyes spilling with tears.

It came time to move Sue. Everything was moved but the bed she was lying in and she insisted that yes, she had to move. And so, there were sensitive negotiations and she said this to Mr. Moon:
"Glenno. I want you to hold me like a mother holds her baby."
And so of course, he did.
He gathered her into his arms and pulled her to him and she was wearing a dress that I had made out of yards and yards of blue cotton. It gaped around her neck and she pulled it close so that even in dying, he could not see those perfect breasts.

And he carried her to Julianne's van and we drove to her new apartment and he laid her down on the bed which her friends had moved and within a short while, she had died.

She died. Sue-Sue died with so much dignity and grace that I was astounded. And as in all deaths, once they occur, the body is nothing. Just a shell of dust and clay. Those breasts of Sue-Sue's were nothing but dust and clay.

But that post of Maggie May's reminded me of all of this. Those perfect breasts, Chip's tears, Sue asking Mr. Moon to hold her like a mama holds her baby.

Listen- breasts are sacred. Not the breasts that have been inflated with bags of silicone. That shit is bullshit. Breasts are what make us mammals. Breasts are nipple and tissue and glands that feed our young. Breasts are art.

Breasts are beauty.
And that's what Ms. Maggie May's post reminded me of. Of the beauty of Sue-Sue's breasts. And how funny she would find it to read this post.

When Sue died, she was cremated and after we scattered her ashes, we licked our fingers.

I hope I got a molecule or so of Sue's breasts on my tongue. That would be holy. Whatever it was that I licked was holy.

And that's what I have to say about breasts tonight, inspired by Maggie May's post which made me think of sweet round bosoms, of the sustenance of nipples, of the perfect circle of life and of death. And of Sue. My sweet, sweet Susan with breasts so perfect that any woman would want them, that anyone would want to cup them, that maybe I took into my body by licking my fingers of her ashes.

"Glenno," I hear her saying. "Hold me like a mother holds her baby."

And there you are- a dying wish. Hold me like a mother holds her baby.

And the sweet roundness of breasts and the unknowable crossing of life into death and the friend that I had named Sue.
Posted by Ms. Moon at 7:16 PM