Where Did Today Go? 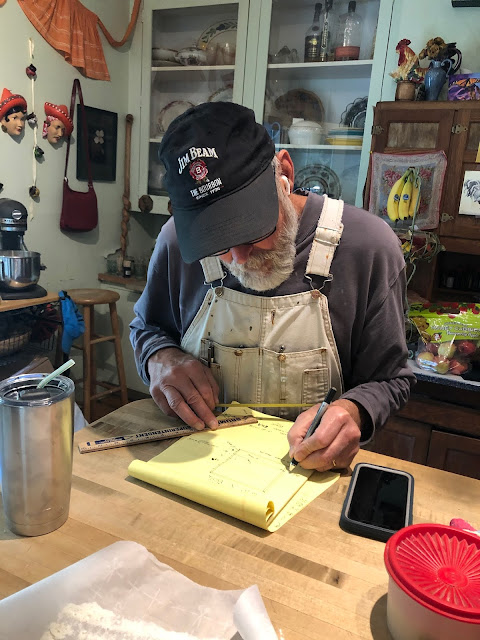 About a week ago I had what you might call a teeny, teeny tiny breakdown. It was mostly about the priorities around here and I will absolutely not go into details but the gist of it is that my husband, after being reassured by me that no, I am not asking him to restore the house or paint it or dig a swimming pool, asked me what it is that I'd really like him to do around here and he said that he was already planning to build out the laundry room.
I told him that the laundry room is fine the way it is for now. It works. Yes, there is a card table in there but so what? However, what I really want is for him to make the old laundry room into a sort of storage/pantry place where I can keep things like the canning kettle and my canning supplies and the stock pot and things I buy in bulk. Where maybe I could even keep my vases! Some of my baking things.
Like that.
We had discussed this before and he has taken on the project with enthusiasm. We've cleared out the junk in there and he's been measuring and planning today. I took that picture of him sitting in the kitchen, drawing out his design and also doing Car Guy work, taking calls and making calls.
He's an industrious man.
I'm quite excited about the idea of being able to use the space which has been a dumping ground for all sorts of things and get a little better organized around here. While emptying the shelves in the cabinet that he's going to be taking down, I discovered several things including the fact that we never, ever for the rest of our lives need to buy a new flashlight. We must have dozens.
Also, for someone who hardly ever dusts, I certainly do seem to have a lot of furniture polish.

Anyway, that happened today and I cleaned the henhouse and I have made a cherry pie for tomorrow which is in the oven now because it took me all day for some reason. There's a custard pie in the refrigerator for tonight because I decided that if I was going to make pastry, I might as well make a lot. That pastry better be good because the proportion of it to fruit in the cherry pie is pretty unbalanced. I really did not make enough filling but oh well.

I feel quite certain that I've done other things today but I can't think of much. It's been one of those days. A good day but one which has passed so quickly that I honestly don't know what happened to it. I had all sorts of plans to start getting ready for tomorrow like picking my greens and getting the tables set up, and things tidied but I haven't done a damn thing.
But you know what? It'll all get done. Every bit of it. The weather should be perfect- a high of 73 with clear skies, and the kids will probably have a good time and the grown-ups will too. I hope. Lily's bringing the famous pineapple casserole (main ingredients: canned pineapple, butter, sugar, Ritz crackers), and there will be a ham and there will be rolls. The rest, as they say, is gravy.
Although not literally in this case. I do not make ham gravy.

And that's about all I have to say today.

Here's a picture of my finally blooming wild azalea. 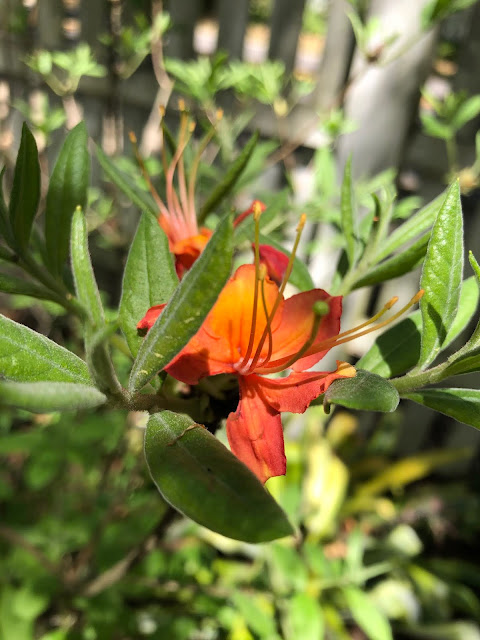 Shy little fiery thing that it is. Jessie asked me yesterday if they grow okay in shade. I replied, "Obviously not that much shade."
It's always the last to bloom. I'd move it but I bought it with Kathleen and I don't want to disturb it. It's also right by the grave of Elvis, my first and best rooster. He was such a beauty. And such a sweetheart. I will let it be.
Love to all...Ms. Moon