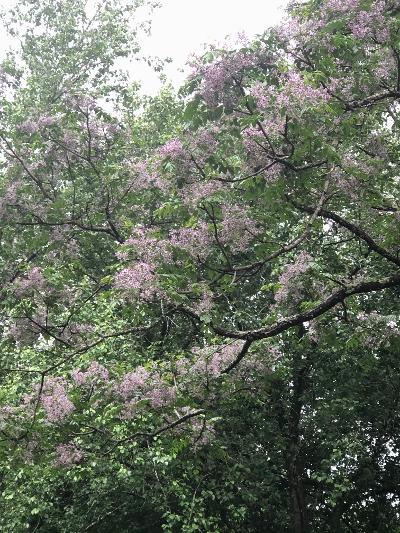 That's the chinaberry tree in bloom and I had not even noticed it until today when Maggie and I were out kicking bamboo. She was wearing her garden boots and by the time we were finished she had the technique down.
"Thank you for taking me on that adventure," she said.
Now I have to tell you that in all honesty I was a bit worried about how Maggie's overnight would go. I have seen the girl pitch fits that compare to the ones her mother used to pitch when she was a little girl.
Which is to say- not pleasant to deal with and that is putting it incredibly mildly.
However, it turned out that Magnolia June was absolutely a little ol' buttercream for her Mer and Bop. She was interested in everything, talkative as a little magpie (haha!) and sweet as she could be. She's so funny, too.
She wanted me to go out to the swing porch and sit in the swing with her and talk. She loves to have conversations. And so we did. I took my martini with me and it was absolutely one of the most pleasant half hours I've had in a very long time. We discussed a lot of things including who my four children are, whether or not my mother and father are still alive, what their names were, the dart board hung on the wall of the porch, her cousins, and much more. When you hit on a subject that she needs more information about she says, "Wait! Wait!" and then proceeds to either quiz me or offer her perspective on the subject.

She wanted to draw me a picture to put up in the kitchen and so I found her markers and paper and this is what she made. 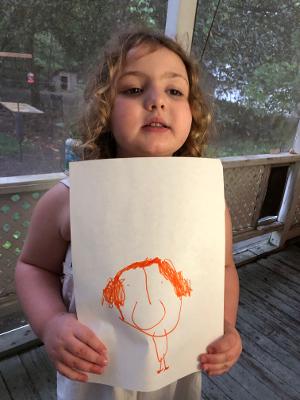 It is me and I think it is very good. It immediately got taped up in the kitchen with all of the other artwork in a place of pride.

She cuddled with her Boppy and they watched Shaun the Sheep and The Mighty Baby Beehm while I made our supper. She ate almost all of her hamburger which she enjoys with lettuce, tomato, pickle, ketchup, and mustard. "Like a sandwich," she instructed. Although she loves broccoli, she did not like my steamed broccoli because she is used to frozen at her other grandmother's and mine was fresh and thus "stinky." Oh well. When we made our martinis, we made her special drinks in a tiny cup with crushed ice and grape juice and cranberry/pineapple juice. She was utterly charmed.
Yes. We are setting a very bad example, so what, don't you judge me. She also got her Purple Cow with raspberry sherbet and grape juice as dessert which she insisted on calling a sundae and almost shrieked with delight when her Boppy put a few M&M's in it. 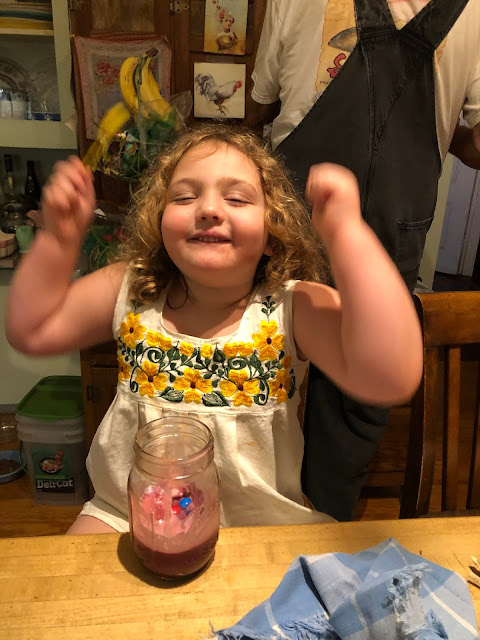 She enjoyed an extended bath in Mer's big tub with all of the ducks and octopi AND her doll which, according to her, is waterproof because it is plastic. I did not challenge her on this and simply gave the doll her own towel when it was time to get out of the bath.
We had set up her bed, the same fold-out that August sleeps on when he is here, beside our bed and she inspected it and found it lacking in one regard- there was only one sheet to lay on. She needed two.
And yes, the Princess and the Pea did come to mind.
Whatever, another sheet was taken from the drawer and tucked in over the first one.
We laid on my bed and read four books and it was after ten by then but she was not ready to settle down. She had to attend to her dolls, she had to have the fan off, the doors and lights just so. She had to be assured that Scratchy Cat would not come and get her in her sleep. At one point she had to get up in order to "play with her babies" because they would just NOT go to sleep.
"But you are their mother," I told her. "You can tell them that they have to go to sleep now."
She thought about this for a hot second and then said, "Yes. I am the boss."
It wasn't too long after that that she fell asleep on her little bed and dang if she didn't sleep there until seven this morning when she woke up and got in bed with us. Mr. Moon immediately slipped away to his chair and we all went right back to sleep. I got up before the two of them did at 8:30 so we did very, very well.

She told me last night when she found my shelves of homemade jam that she wanted toast with jam for breakfast. Also, eggs. So that was what we had. She wanted "real eggs" which, it turns out, are the kind with the yellow part in the middle and the white part outside.
Fried? I guess so. That's what I made. And she was very happy with them. 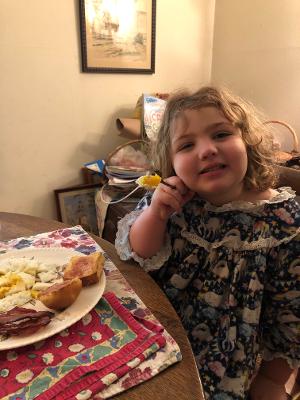 She told me that I was the BEST chef but warned me not to tell her mother because her mother is a great chef and if she found out that Maggie said that I was better, she would not let Maggie come back to visit.
As if.
I assured her I would not tell her mother she said that.
After breakfast we let the chickens out and she gave them some corn and we picked some mulberries and she wanted to check on the garden which I thought was absolutely wonderful. She went straight to the carrots and asked if she could pick some. I told her she could and she did. One of them was a tiny bit provocative which I did not point out to her. 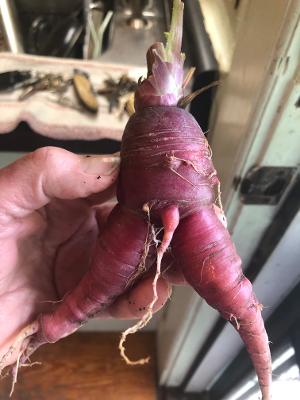 And we kicked the bamboo, as I said, and she wanted to go into the old barn to see what it was like. 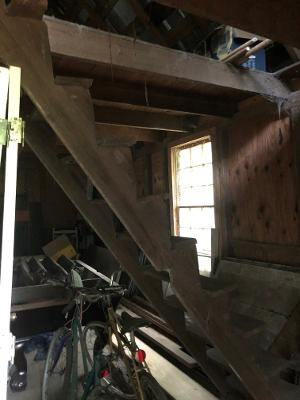 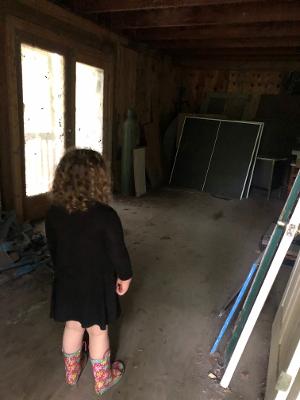 She was not impressed. I think the cobwebs put her off a bit.
I finally started hinting that it might be time to go home soon around eleven but she had things she still wanted to do. We read some more books on the porch swing and she read one to me. "Five Little Monkeys," which she sang to me. She has a very fine voice.
But then it was time to go home and we packed up her things. She wanted to take my old Zippy home but I would not let her. She fussed a bit about that ("I don't understand!") and I told her she could take something else so she picked out a stuffed elephant and the Fisher Price rolling phone.

I drove her home and she was glad to see her mommy and her brothers and then her daddy came to pick up all the kids because it was a daddy night. It was good to see Jason. I hugged all of the kids and their mama too and then I drove home where I've done very little but enjoyed it all a lot.
So it was a very good sleepover and we shall do it again soon although first Gibson and Owen have to have their nights. Maggie has told me that she wants to come with them. We will have to work this out.
And Lily sent a picture that Jason had sent her and the whole family has been chortling ever since. Turns out that Maggie's big brothers have taught her a new trick. 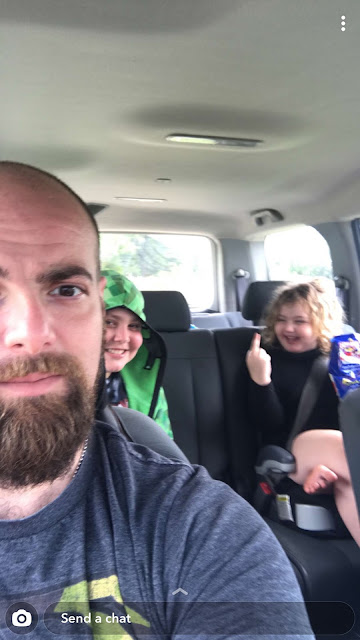 I can't help but laugh. Look at Owen's face. Lily said, "Where have I gone wrong?" and of course she hasn't. Life is just life and kids will pick up everything. May reminded us of when Jessie was a little bitty girl and learned to snap her fingers and say, "Goddammit" on the same day and thus went about snapping her fingers and saying, "Goddammit". I do not remember this but wish I did because it sounds pretty hysterical.
So that's the Saga Of Maggie's Sleepover. She was a delightful guest.
Love...Ms. Moon