In Which I Am Spoiled 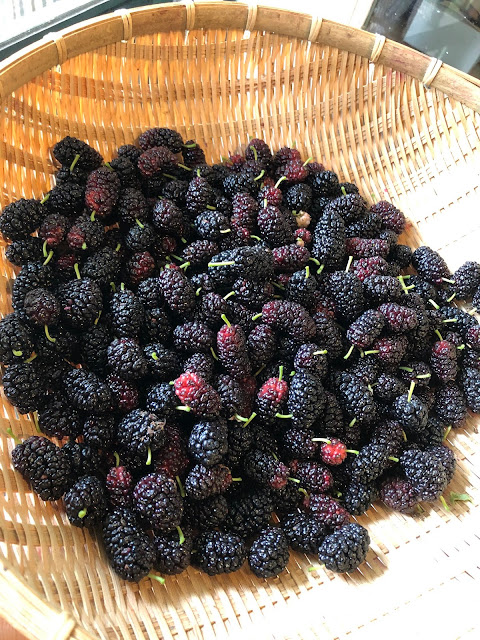 I picked a basket of mulberries today and will pick more tomorrow. I might make a pie. Who knows? I've just about given up trying to make plans. One would think that with my life I could safely predict what I will be doing from one day to the next but one would be wrong.

I was sitting on the back porch this morning when the chickens, who were still shut up in their coop, made a horrible ruckus, flapping about and shrieking at the top of their little chicken lungs. I rushed out the back door to see what I first thought was a fox, slinking away from the coop but it might well have been a coyote. It was pretty large for a fox. I did not get a good look at it before it slipped into the bushes by the railroad tracks but whatever it was, it wasn't a dog. It had a very bushy tail and that I am sure of.

Dammit, everything loves chicken and now this mystery canine knows where my own personal chickens live.

Lily and I had planned on getting a pedicure this afternoon and Jessie said she could join us. My toes have been sadly and sorely neglected for over a year now. And as much time as I spend outside wearing flip flops, my feet have just been looking like hell. I am not vain about my feet although I used to have feet that were pretty enough to inspire vanity. Truly, they were. But one does what one can, you know, and as anyone who has ever gotten a pedicure knows, it is the most luxurious of treats. And so, Lily made us an appointment at a salon where we'd never been and it was so fun. Everyone was masked, of course, there was hand sanitizer everywhere, there were plastic screens between the manicurists and the customer with a space for them to work through and they took our temperature when we came in. It felt quite safe. We lounged in our massaging chairs while beautiful young women tended tenderly to us. Before I left home I shaved my legs, I used a loofa and lots of soap on my feet, and I even scrubbed my flip flops. It would have been so embarrassing to track chicken shit and black Lloyd dirt into such an elegant salon.
I am not even kidding here.
So now my feet feel so pampered and my legs are smooth. I chose polish which is just about the same color as I always choose. My daughters tease me about this but like Popeye, I yam what I yam. 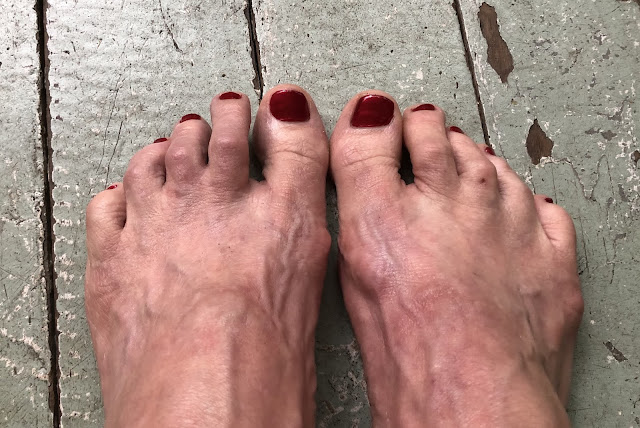 My poor old feet are as scarred up and worn out as my porch floor.
Still, it was worth it just to get to sit there and be tended to, to be able to talk and laugh with my daughters. When the lady was done working on me, I wanted to gather her into my arms and gently embrace her.
I did not. But I did thank her about a dozen times and tipped her well.
Mr. Moon has been working on the shelves all day, painting and sanding. He called me in to look at something and at first, I did not see what he meant to show me.
"What am I looking at?" I asked. He pointed to the floor which a shelf was about to cover. I peered over his shoulder and this is what I saw. 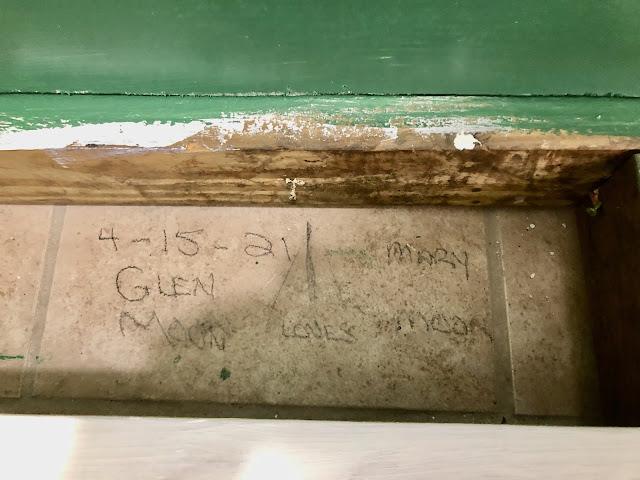 Can you see it?
"Someday, someone will see that," my husband said.
Listen- my husband is not perfect. He's more perfect than I am and that's a whole other story. BUT, he is perfect for me. There is so much that he could be working on, that he wishes he was working on, and yet- he is spending days making my pantry dream come true. That's real and that's love and that's real love.
Tomorrow Jessie and Vergil are heading up to Georgia to sign papers and haul back their new (to them) RV which they plan to stay in on Black Mountain when they go up this summer to work on the house they want to build there. They are going to drop off their sons who will be staying with us until they get back. I think I will be a terrible grandmother and tell them that their parents have abandoned them and that August's dream of being adopted by Bop and Mer is coming true.
Haha!
Of course I won't. I am mean but I am not that mean.
Love...Ms. Moon
Posted by Ms. Moon at 6:04 PM