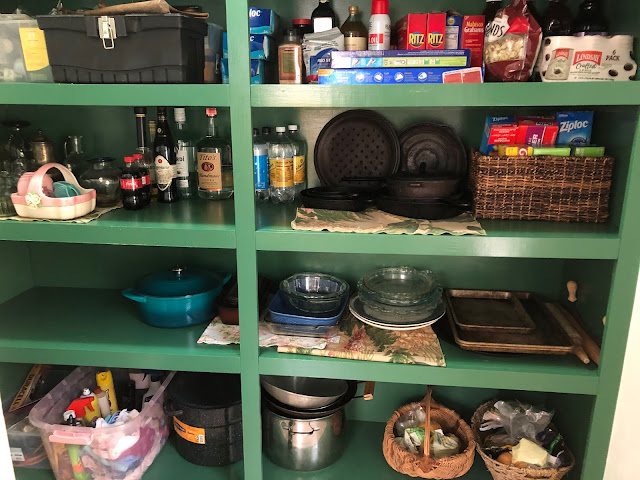 When I woke up this morning, I was expecting to find a house full of Weatherfords but shockingly, they had already left. I stared at the place in the yard where the camper had been last night and it was empty. There was no sound of children, no Jessie giggles, no Vergil voice. I went to the Glen Den and said to my husband, "They're already gone?"
"Vergil had a 9:00 work call he had to make," he said.
I pondered for a moment.
"We will now resume our regularly scheduled program," I said.

And so we have.
I knew exactly what I wanted to do today and I did it. First though, I did some laundry and made up the bed and folded and put away the boys' sheets and blankets and the little beds themselves. I wanted my decks cleared for the task I'd been looking forward to for so long.

And I began.
First I went through the bins that we'd put everything in from the old cabinets. I put all of the flashlights in one small bin, all of the light bulbs in another. The batteries got their own designated box as did the insect repellants and ant traps and flea spray and all things unpleasant for bugs. Almost everything is fairly well organized in a logical fashion, or at least to my mind.
And then I began putting all of the canning stuff on a top shelf. Not the kettle because that went on the bottom with other pots I don't really have room for in my kitchen cabinets. But jars and lids and bands and pickling salt. 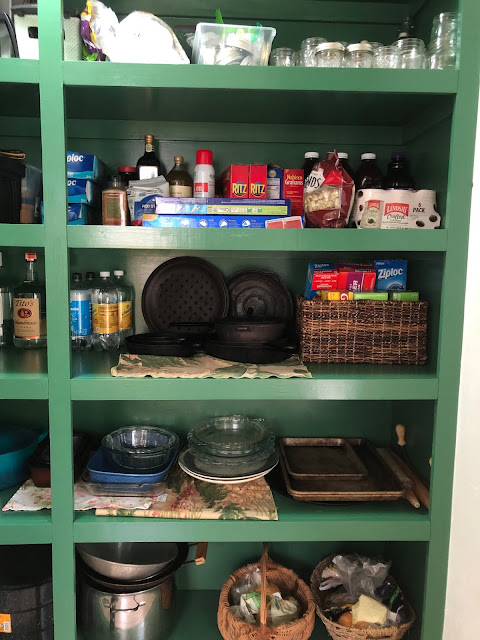 See them way up there?
On to my cast iron which is now at a much easier level to get to. That stuff is heavy and it's wonderful not to have to get down on my knees to lift it out. The large bags and boxes and bottles of food and juices were transferred, making the cabinets where they'd been kept so much easier to find things in. I put the potatoes and onions in baskets. They had been stored in the bottom cabinet of my kitchen hutch along with a bunch of other stuff- a constant inconvenience. I moved baking pans from an entirely different cabinet to make them more accessible. I transferred vases and liquor stuff from the counter under my glass-front china cabinet. Also, big platters that have been stored in that china cabinet, always threatening to crash down if whatever was in front of it was moved.
What a joy. And as time goes on, I may shift things around, move some things back to where they were, put other things in their place. We shall see. But for right now, I am so happy.
I have so much more room in my junk drawer because I moved all the batteries out of it. So much more room in my food cabinets. So much more room in the cabinet where I keep my glassware because I had too many mason jars in there and I do use them as drinking glasses, but I sure didn't need as many of them as there were. I remember the first time Mr. Moon's parents visited us and I think they must have been shocked at my use of canning jars as drinking glasses because they bought me a set of nice ones. It was hard for them to fathom anyone who could afford real glasses drinking out of what they put their beans up in. But they're sturdy and easy to hold on to and I have never found any other glasses to drink out of that I like as well.
I took two bags of trash to the trash place and hope to get rid of a lot more stuff. It's ridiculous to hold on to as many things as I have. Even my leftover container cabinet is so much easier to deal with now because I could move some of the things I had in there to the new shelves.
I think I will now be inspired to more fully organize, to give things away, to trash the stuff that no one could possibly want.
But of course, none of this is important in the grand scheme of things. What is earthshaking is the verdict that came down just a little while ago in the George Floyd case.
And I'm sure you know by now, Derek Chauvin was convicted of two counts of murder and one count of manslaughter.
Guilty, guilty, guilty.
Led out of the courtroom in cuffs.
Finally, justice in this nation has been served.
When I heard the judge read the verdicts and then listened as each juror confirmed their votes, their belief in those votes, I cried.
After watching that video, after listening to the testimony of the witnesses, I couldn't imagine them voting any differently but as we all know, the truth doesn't always mean a damn thing when it comes to police violence and the death of Black men. And Black boys.
I do not really believe in "closure" but I do hope that this verdict will at least give George Floyd's family the satisfaction of knowing that a jury found their loved one's murderer guilty. I can't imagine what this conviction means to those who have the radical audacity to be Black in America.
So that is that and we shall see what the sentencing looks like.
Meanwhile, there is still much to fight for, must to hope for, much to dream for, much to work for because the murders never seem to end.
And they probably won't in my lifetime.
But this is a tiny step in the right direction.
Love...Ms. Moon
Posted by Ms. Moon at 6:25 PM