From Our House To Yours 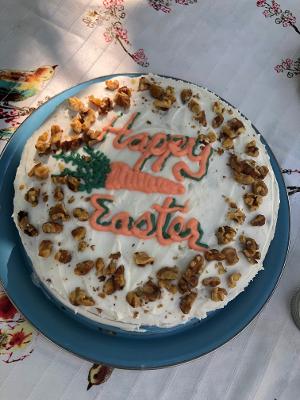 Oh my goodness. What a day!

Started out this morning when Mr. Moon and I heard a huge bang from the little intersection a block away. There's a flashing red light one way and a flashing yellow the other way, and people do get in accidents there. This wasn't the first big crash we've heard and we knew exactly what it was. We put our shoes on and walked down there and sure enough, there was a small car in the road with the entire front peeled back, the engine completely revealed, the windshield a spiderweb of cracked safety glass. It had hit a large truck which was pulled off the side of the road. An older man was sitting on the step that leads into the cab. He had hit his head but appeared to be okay. The girl who'd been in the car was, quite unbelievably, standing up and talking.
The airbag had saved her life without a doubt. She literally had one small scratch on her hand, a tiny scarlet thread.
Another woman had taken charge of her and they were making calls that needed to be made. I was amazed at how many people had gathered already and how many showed up almost immediately. I don't think of Lloyd as having that many people about but here we all were, all with the intent of helping if we were needed, all of us amazed that the young woman was not only alive but seemingly fine.

We didn't stay very long. The troopers had begun to show up and we could hear the ambulance so we were nothing but a nuisance. We came home and I did my cooking and Mr. Moon trimmed the wisteria.

The kids started getting here around 2:30, first Hank and Rachel, then Lily and Lauren and the kids, finally Jessie and Vergil and their two. The children, especially the three youngest, ganged up and immediately began playing. Rachel had brought them little presents and I gave them mine. They'd all already had about a year's worth of chocolate and other candy but that did not deter them from going for more. And isn't that the point of Easter?

That and the egg hunt and we had one of those.

My food turned out fine. The ham was good, the greens were lovely, the rolls the prettiest I've ever made. Rachel brought macaroni and cheese, and lemon and poppy seed muffins which Levon called the cake muffins. Lily brought the pineapple casserole and a salad and pickled beets that she'd made. Jessie brought the beautiful carrot cake.  Vergil and Mr. Moon dragged out the big table from the garage and we feasted, some of us sitting a distance away.

Here are some pictures of the day. 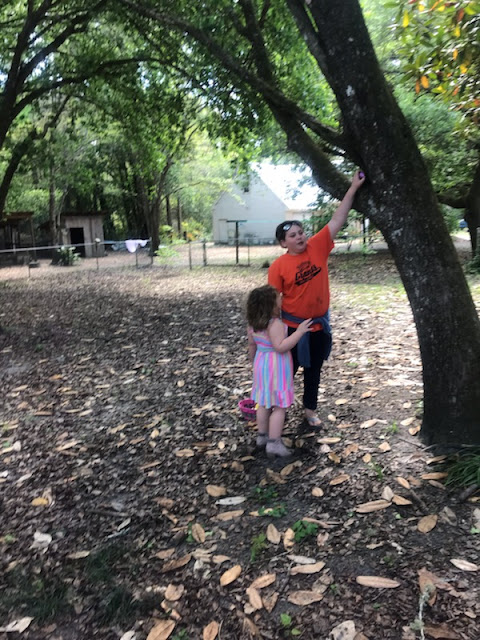 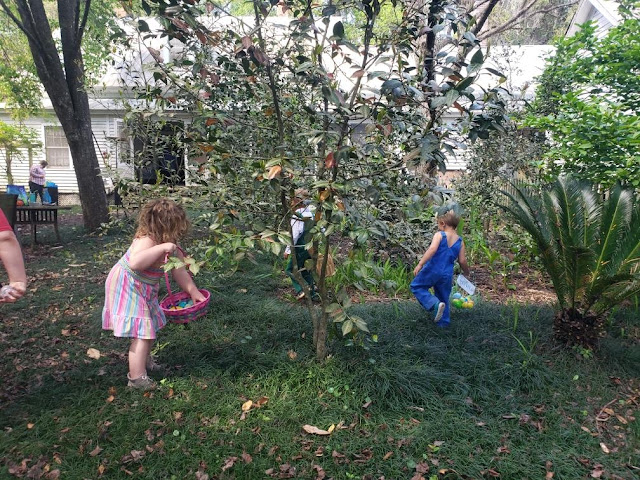 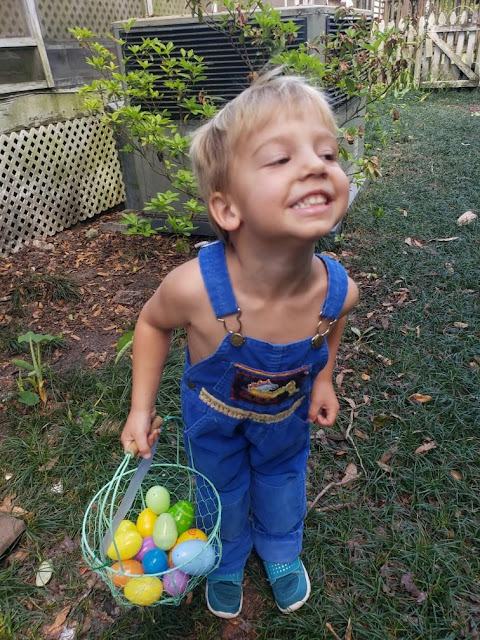 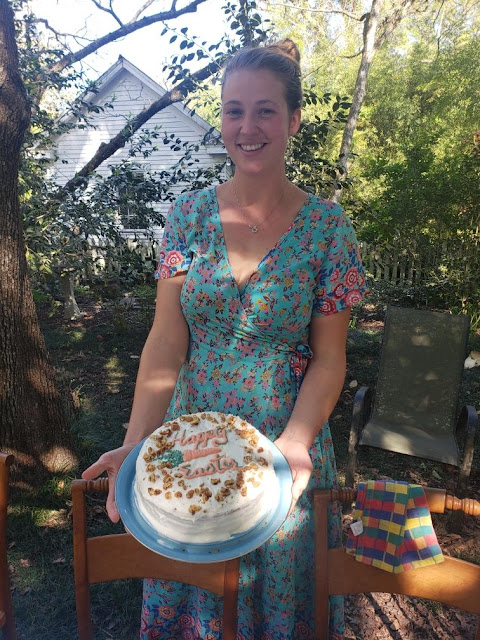 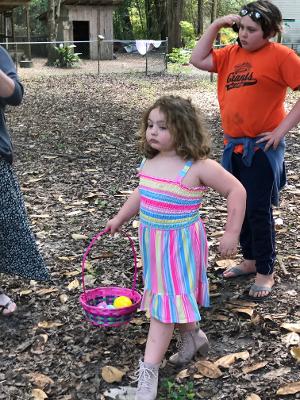 Ms. Magnolia is one determined girl. 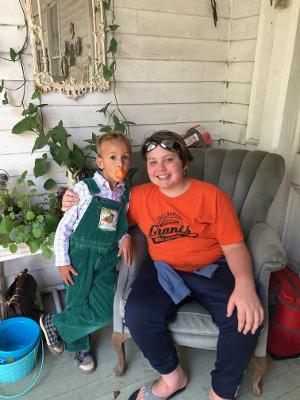 That's a candy pop that August is sucking on. 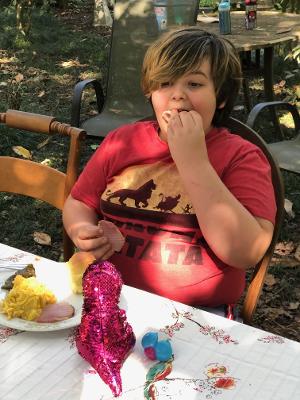 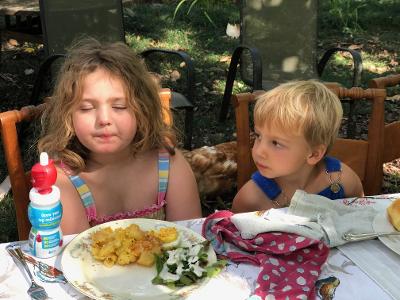 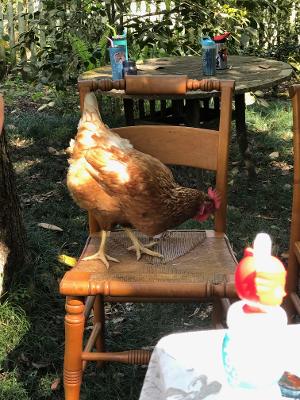 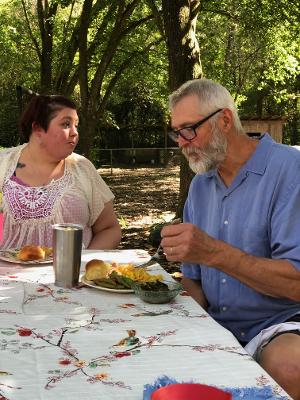 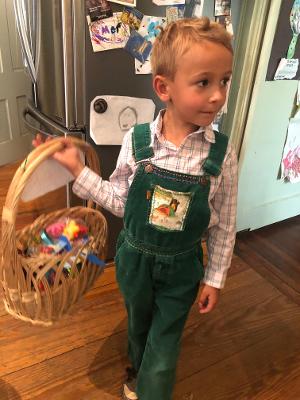 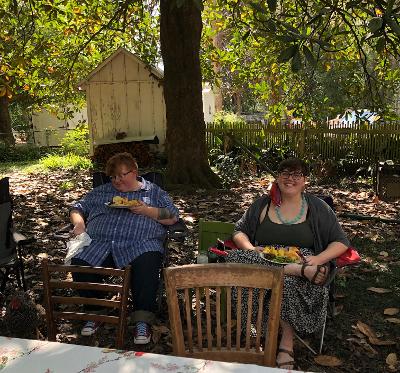 Rachel took some of the pictures but I'm too tired to try and figure out which.
It really was like old times. Or at least, sort of like old times. Kids running about, slamming doors, playing with toys, making up games, too excited and sugared-up to really sit down and eat. Everyone helping out, chickens wandering about in the hopes of snatching food off unprotected plates. Lots of laughing. Some bamboo kicking.
We sure did miss May and Michael though.

And so that was it. Another Easter come and gone. A day which could have been a complete tragedy for the family of that girl in the car crash and yet, miraculously was not. I am so grateful for that. It was a day where family came together, ate together under a beautiful blue sky.
Here's the Easter card that Lis sent us. It's from her first batch of cards for this particular holiday. I adore it. 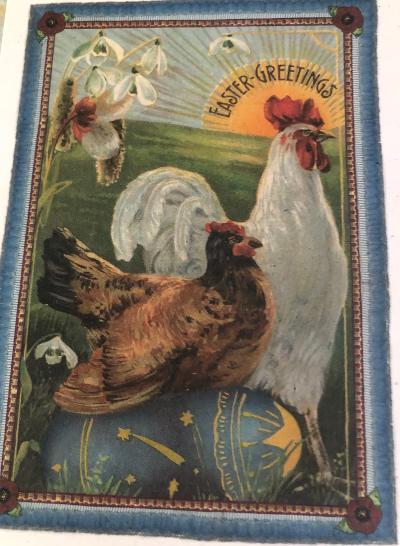