Trigger Warning: If Reading About Puke Bothers You, Skip This One 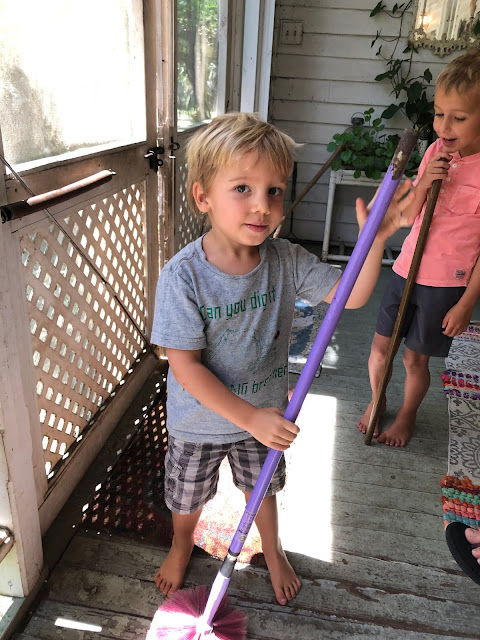 This is a picture from right before the darlings left with their mama this afternoon. And in a way, it is sort of an "after" picture.

We had a lot of fun last night. Just like the Little Red Hen in our favorite book, "The Little Red Hen Makes a Pizza," I chopped and mixed and kneaded and chopped and made us a fine big pizza and a small one too which was just as lovely while everyone else was watching TV which was fine with me because I had no desire to watch whatever it was they were watching which involved giant...things.
Don't ask me.
I was much happier in the kitchen with my normal-sized knives and graters and pans. 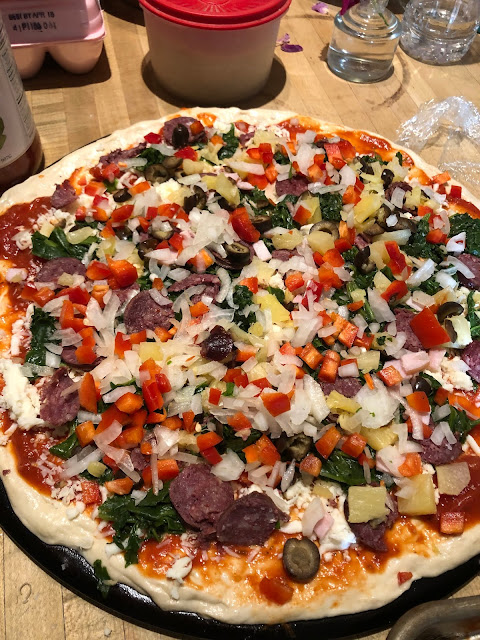 We ate the very tasty pizza and August, being August, ate what he told his mother today was "four pizzas." Four pieces would be more accurate and that is indeed what he ate. 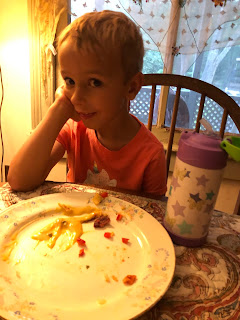 Then it was time for purple cows and then it was bath time. (By now y'all could write this script yourself, right?) I did the baths last night while Mr. Moon cleaned up the kitchen and for once, the boys did not get wild at bedtime. They were quite civilized, in fact. Well, for small boys, anyway. 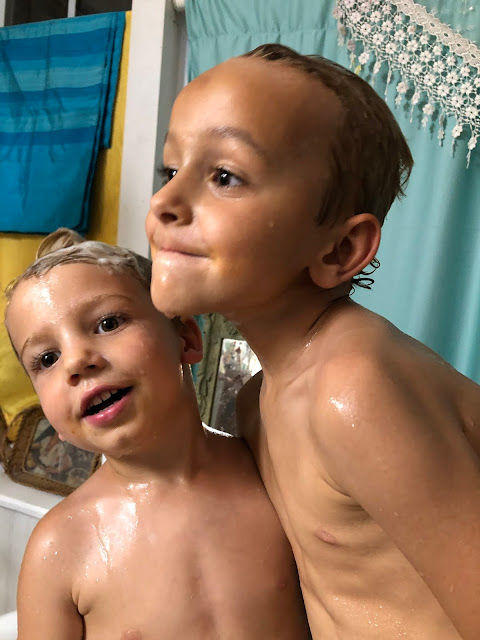 Then pajamas were put on and they both got to use my powder which is very special powder that I never use but it's applied with a big powder puff so that is especially fun. They get to do it themselves and is now part of the ritual.

And then stories. We read three books, including the Little Red Hen one and Boppy was kissed goodnight and both boys were tucked in although Levon couldn't settle and then a train went by (we are about four inches from the train track) and he told me that Speed Train had been SO LOUD and it worried him and he needed to snuggle so I laid down with him on my bed and within minutes he was fast asleep and I put him in his bed, right beside ours.

And they slept through the night, so sweetly. They woke up about seven-thirty but didn't get up until a little before eight and Boppy took them off to watch TV and I slept for awhile longer. When I got up, all was well. They'd peed and had some juice and banana and wanted their real breakfast. August really wanted pancakes and so pancakes I started and while I was hustling around in the kitchen August told me that he'd spit up before I got up which I asked Mr. Moon about. Yes, he had spit up a little but not really throwing up, you know. Just a little...spit up.
And then I noticed that the boy was in some distress. I asked him about it. He's quite stoic, that one, but he told me his tummy hurt.
"Do you need to poop?" I asked, as all mothers and grandmothers do.
"No," he said. "I don't think so." But I could tell he was not feeling good and then suddenly, I saw the signs of impending pukage (yes, that is a medical, scientific word) and before we got to the bathroom, he had not spit up on the floor, but definitely thrown-up.

Poor little guy. Of course he felt much better for a little while as one does after a good vomit, and a sort of chaos ensued as I already had things going for the pancakes, with bacon in the oven and Mr. Moon had to go into town for work and needed his breakfast. And then the waves of distress started to roil again and we made it to the toilet, mostly, this time, and I tried to comfort August but he took it all in stride, in a very calm manner. I called his mother and told her what was going on and we agreed it could have been the pizza or it might be a bug but whichever, he needed to rest and so back into the Glen Den we went, August now clutching my big white plastic bowl and "Shaun The Sheep" was turned on and although I could tell that he still didn't feel well, he immediately plugged into the show. As did Levon.

I made Mr. Moon's breakfast, got him out of the house, got Levon fed, August puked a few more times and so there was clean-up and the use of a cool washrag and I noticed that the last time he vomited, he managed to keep his eyes on the screen as he neatly got the mostly-by-now-bile in the bowl.
I knew he would survive.

Levon, eating his pancakes said, "You're taking care of my brudder."
I loved that so much.
After TV we read stories and before too long, August seemed absolutely fine.

Later on, when Jessie came to get them and we were discussing it all, I asked August if he was ever going to eat pizza again.
"Yes," he said, "But not today."

And so that is the story of what was, except for a probable tummy bug, a very nice sleepover. We don't think it was the pizza because he didn't wake up vomiting in the night (thank you, sweet baby Jebus). We shall see if anyone else gets it, if indeed that's what it was.

In technical matters, I have decided that the problem with my photo-sharing is that my phone keeps dropping my WiFi.
ARGGH!
I did a very small amount of research and yes, there are remedies but they come with warnings like, "BE CAREFUL! IF YOU ACCIDENTALLY HIT THE WRONG COMMAND YOU MAY WIPE OUT ALL OF THE SETTINGS ON YOUR PHONE WHICH WILL RENDER IT USELESS UNTIL THE APOCALYPSE AT WHICH POINT IT WILL STILL BE USELESS!"
Oh dear god.
I'm also getting a message on my phone when I re-connect the WiFi telling me, "WPA/WPA2 (TKIP) is not considered secure.
If this is your Wi-Fi network, configure the router to use WPA2 (AES) or WPA3 security type."

Oh right. And while I'm doing that I'll be translating Shakespeare into the Amazonian Aboriginal People's tongue and retiling the bathroom and writing best-selling erotica under an assumed name.

Meanwhile, I do believe I'll go steam some artichokes.