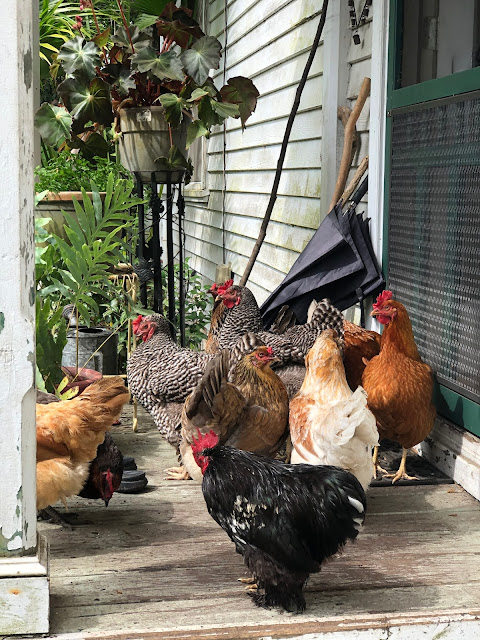 I was thinking I might go to town today to do my weekly shopping and perhaps go to Target for the first time in well over a year to look for shelf organizing things. But then it started to rain and then Mr. Moon took my car to town to buy paint and I got into repotting a few plants and planting a few things and the day just went by and I stayed right here, right here in Lloyd.

On rainy days the chickens spend a lot of time on my kitchen porch. They aren't interested in making dirt baths and lounging if it's wet out and they know that treats often come out of that door and so that's where they gather and chat and hope for manna to fall.
I watched Fancy Pants pecking the gnats off one of the hens for awhile. I do not know whether she enjoyed it, appreciated it, or just tolerated it. 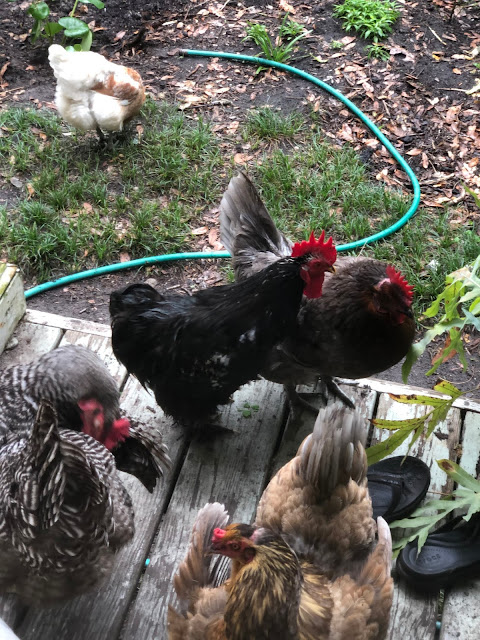 He is a good little rooster. He's constantly trying to tid-bit for the ladies but they frequently rudely ignore him. Still, he continues to be gentlemanly about it. And Liberace is quite tolerant of him although occasionally he does take umbrage and chases the small man away from a lady he's courting. I never see him actually attack him although as I have said, sometimes the hens do.
When I had my crazy shopping day a few weeks ago and went to Joann Fabric, I bought several yards of a nice cotton heavy gauze and I've been meaning to make a dress of it. I had forgotten that the pattern calls for bias tape and Lord knows I'm not going to make another drive to Joann's just for that so I decided to make my own. I know my mother used to sometimes make her own and I had the general gist of it which is to cut equal-width strips of fabric on the bias and stitch them together. Duh. I looked up a video to see if there were any good tips and as I do every time I look up a sewing video, I realized that I do not have all the seamstress accoutrements that would make these projects so much easier. I do not have the cutting surfaces or the necessary measuring and marking devices. I do not own rotary scissors. Mostly this is fine because I am NOT a seamstress. I am just a person who does very basic things with thread and material. But sometimes...
Well.
Here's what I used today to make my bias tape. 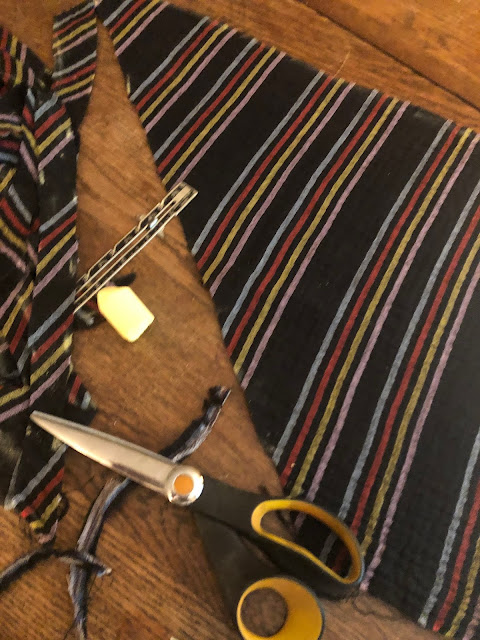 The cloth, of course, a pair of scissors, a cheap little ruler thingee, and a piece of sidewalk chalk that I whittled down to make markings. I started out using one of Mr. Moon's levels to use as a straight-edge to make lines with but that didn't really work very well.
Actually, none of my stuff really worked very well and my bias binding is going to be pretty darn wonky.
La-di-dah.
I do have a tracing wheel and tracing paper but the stuff they sell these days is wax-free and doesn't work worth a shit.
Anyway, that's as far as I got.
I've also made a sauce for lasagna with yellow squash, zucchini, onions, mushrooms, peppers, chopped tomatoes, rainbow chard and spinach. It's been simmering for hours and I hope it's good. I grew such beautiful rainbow chard this year and I have absolutely no idea what to do with it except to put it in salads and cook it with my other greens. If any of you have great ideas in that regard, let me know. I have a loaf of sourdough in the oven that I started yesterday afternoon with plenty of oat bran and whole wheat in it. Sounds like a fine supper to me.
I've sort of checked out of the world today. I made the mistake of looking at a news page to be greeted with a huge headline about the murder of a thirteen-year old boy named Adam Toledo in Chicago two weeks ago by a cop and am plunged into horror again.
Things must change. They must.
And here I sit, changing nothing, going about my silly business with material and scissors and chalk, onions and squashes, mushrooms and tomatoes.
I don't know, y'all. I just don't know.
Anything. I don't know anything at all.
Love...Ms. Moon
Posted by Ms. Moon at 6:24 PM