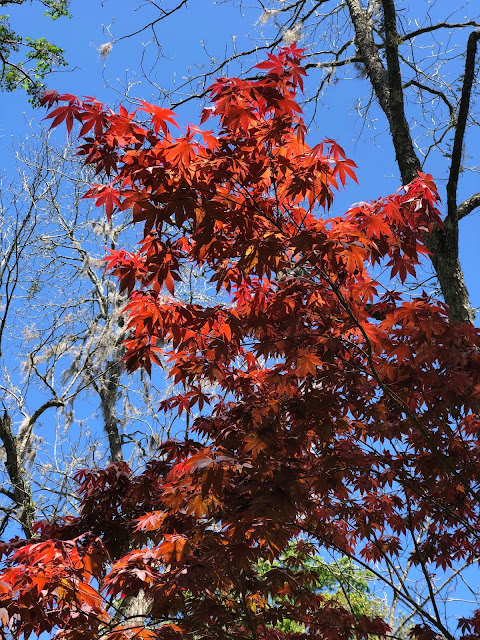 Well, as I always say on Good Friday, Happy Day They Crucified Our Lord!

And then I generally proceed to tell the story of how my younger brother was mesmerized by the soprano with the huge bosoms and amazing vibrato who sang "Were You There When They Crucified My Lord?" in church when he was about four years old, his eyes as wide as interplanetary flying saucers as he stared up at her trembling breasts, stunned by the sounds coming out of her mouth. I shall never forget.

Next I traditionally go into my Easter rant about how ridiculous it is to believe that The One True God needed to send his only begotten son to get tortured and crucified to save us poor pathetic humans from our sins in order for us to have eternal life. I carry on a bit about why The One True God only had one begotten son when he could have theoretically had billions and then I question how the act of being crucified and then resurrected from the tomb could possibly save us and allow us to have eternal life and generally end with the fact that if you are not interested in eternal life the whole thing seems pretty bizarre and confusing.
There's more but that's the summation, I suppose.

Then I frequently segue into how the miracle of rebirth in nature every spring is more than enough for me and I see no need to dwell on a bloody crucifixion or believe in resurrection when there are such things as wisteria, magnolia blossoms, baby chicks, beans breaking the ground with their tender sprouts and sending out tendrils to grasp the fence, and so on and so forth, to see with my own human eyes and love with my own human heart.

You get the gist.

I've gotten into a bit of a FB row today which started out about enslaved people in the history of our country which led to a further argument about a god being in control of everything so...
I'm not sure what.
Enslaving people and forcing them to build everything and grow everything and tend everything and then moving on because a god ordained it is okay?
So I'm not being entirely lackadaisical in my (obviously ordained) task of educating the masses and consider it a compliment that I've been called an "historical fool." Now if I could only be called a fucking atheist, my day would be perfect.

Actually, my day has been pretty perfect. It's been so cool that this morning when I was hanging sheets on the line my hands froze! It's not gotten up to sixty-five degrees all day and the sky has been as blue as in the picture above that I took of my Japanese maple. Jessie brought the boys out and they helped Boppy do something with what Levon calls HIS race car and I got to read them some books and Jessie went and got our lunch at the Hilltop and she was in a good mood too so she and I giggled a lot. She and August helped me kick bamboo and I showed August my tiny newborn Buckeye and he said, "I think you already showed me that," and I apologized because I'm sure I have and I doubt he was that interested the first time but he was so polite about it. When I was reading them a Richard Scarry story about how Mister Mouse and Mistress Mouse got married, Levon turned to me and kissed me full on the mouth which cracked me up so much. I think that love makes him happy.

Another thing which has made me feel cheerful is the way the new rug looked in my bathroom this morning when the sun was shining in so brightly. 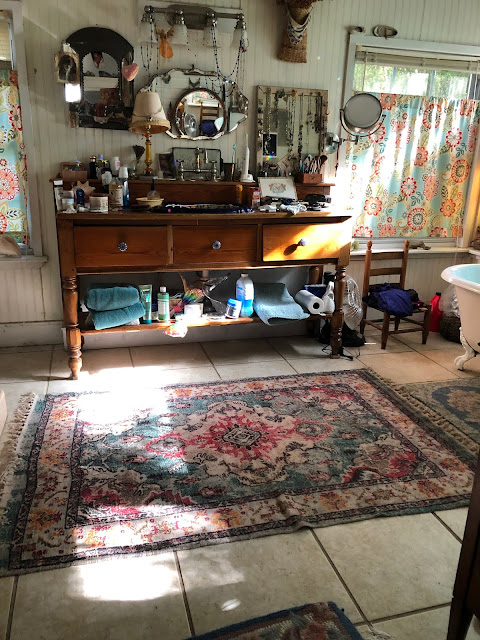 I do believe it would be a good idea to do some de-cluttering there, don't you?

And so the day has sweetly passed and it's almost martini time. Tomorrow I will make a cherry pie and on Sunday afternoon all of the kids except May, who has to work (on Easter Sunday?!), are coming out and there will be an egg hunt and a ham (be still my heart) and some greens and rolls and deviled eggs and whatever anyone else brings, not to mention sequined dragons and so forth, and that should be fun. There will be masks but it will all be outside and like Gibson's birthday party, it will feel a little bit normal.

The traditions continue as they should.