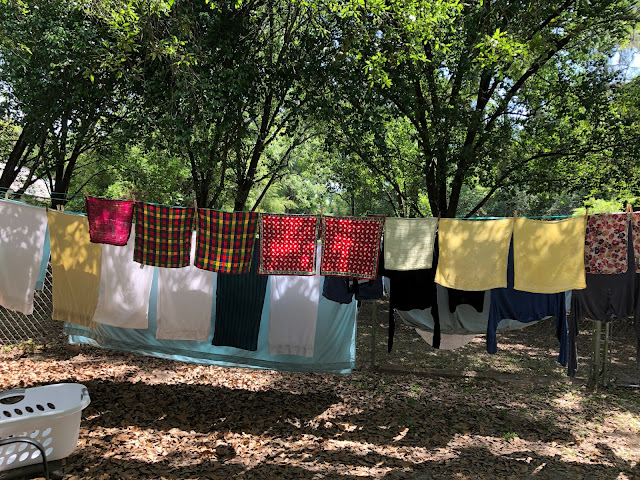 The prayer flag washing got hung on the line today in the sweet, cool air and although there is nothing at all special about this photo, the sight of it makes me smile.

I was determined today to get something done. And I did. I've been wanting to get to the little piece of yard behind the old kitchen. It looks wild and that's fine when the wildness is a great abundance of the phlox that grows so well there that I transplanted from the last house we lived in. But there was also bamboo and the Gee Dee glory bowers as well as dewberry vines coming up everywhere. The whole place used to be filled with betony, or rattlesnake plant but I've mostly gotten that under control over the years. Still, I've been meaning to get in there and pull and weed and chop out what I don't want and today was the day. 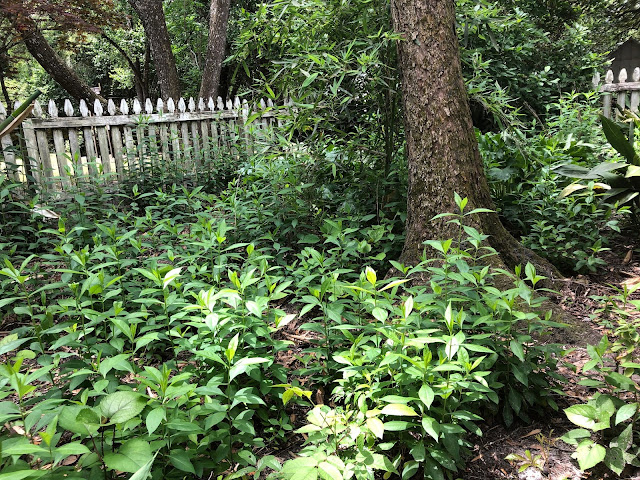 That's part of what I was looking at. The thing that was hardest and most time-consuming was getting rid of bamboo. The stuff has a sneaky intelligence, coming up and being invisible until it reaches a height of about ten feet and I tried to find each and every stalk, mature or not, and get it out of there. At first, I did not have the tool I really needed which was a pair of loppers, and struggled with a shovel (Oh, Levon! Where were you?) my pruners, and a limb saw. After Mr. Moon found the loppers for me, things went much easier but that wasn't until I'd probably chopped, sawed, dug, and cut well over half of it. I pulled all the glory bower I could find, a small amount of betony, the dewberry. I tidied up the area where our beloved old dog Pearl is buried, along with Hank and Rachel's sweet old cat, Johnny Karate.
I also picked up fallen limbs and made many trips to the burn pile with all the detritus.
And that about wore me out.
I'd show you an after picture but you would be able to tell much of a difference. I can, though.
As I worked, Maurice would suddenly appear from underneath the low-lying branches of the Japanese magnolia or under a clump of phlox. Here she is, taking the sun, looking at me toil through slitted eyelids. 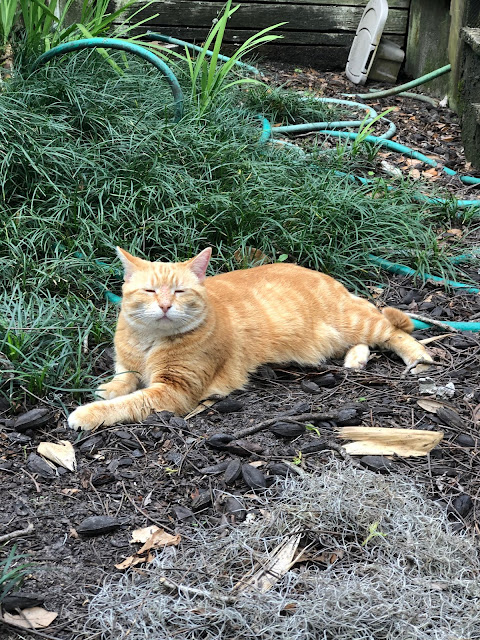 That cat has been sleeping with us almost every night and it has been days, DAYS, I TELL YOU! since she has drawn blood.
And then I picked mulberries. I tried to snip the stems as I picked with my thumbnail which is why my hands look like this. 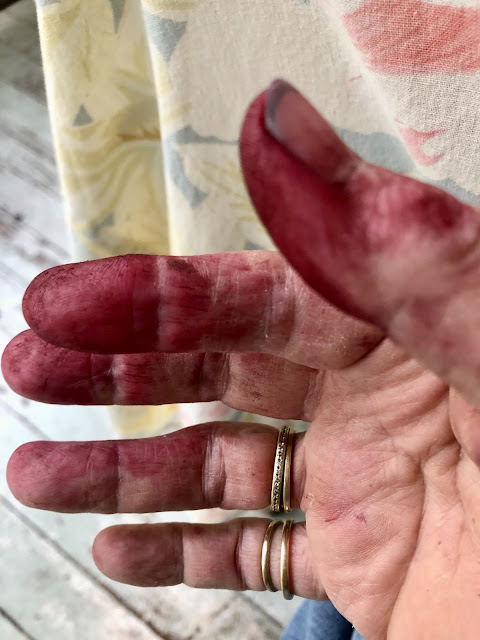 Actually a rather nice color, I think.
Mr. Moon helped me for a little while. We picked this many. 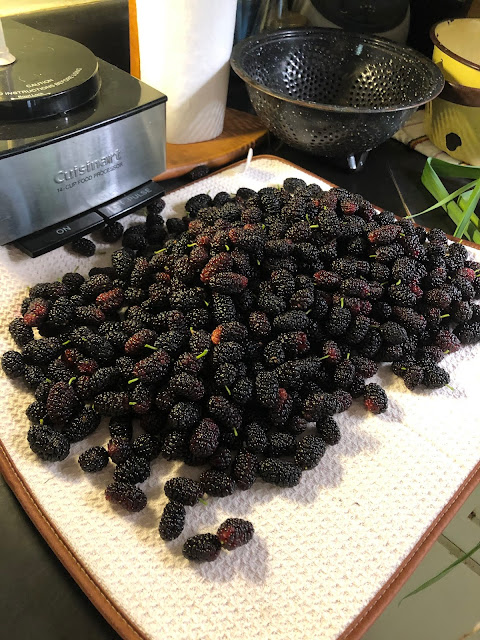 Jam soon.
He has spent most of the day in the garden which is truly a thing of beauty. A few more pictures. 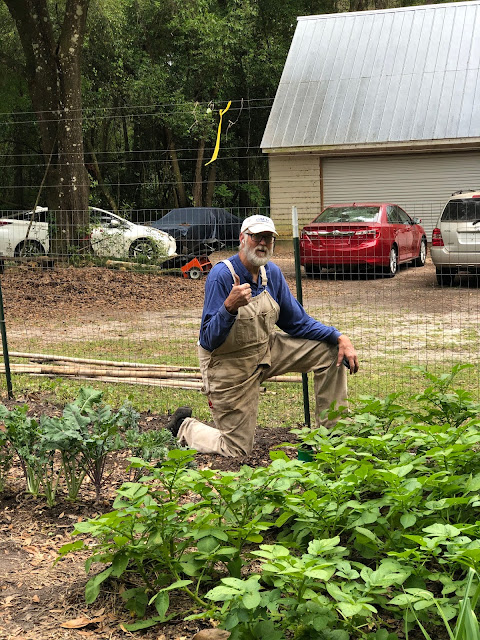 A man and his garden. 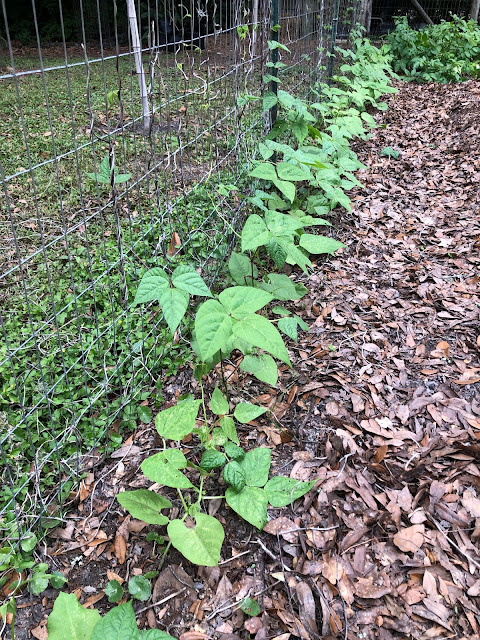 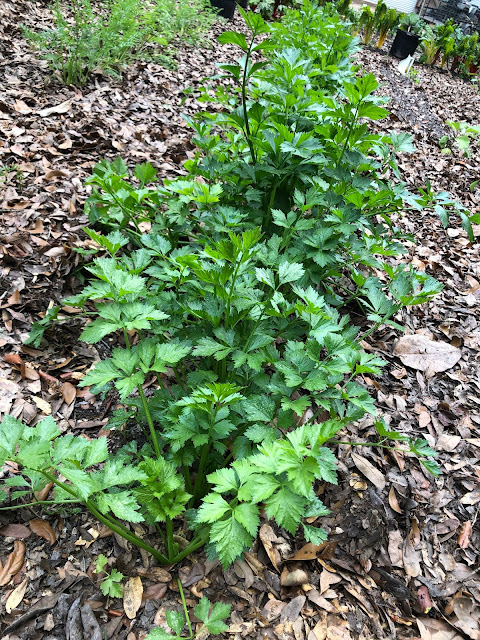 The celery in question. 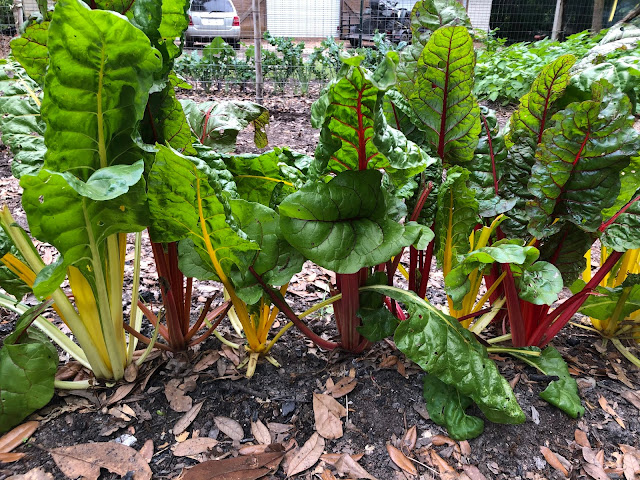 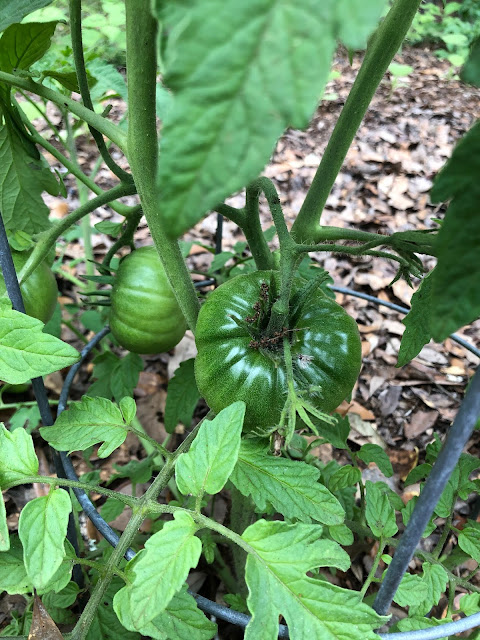 Tomatoes coming along.
And finally this, which has nothing to do with our garden. 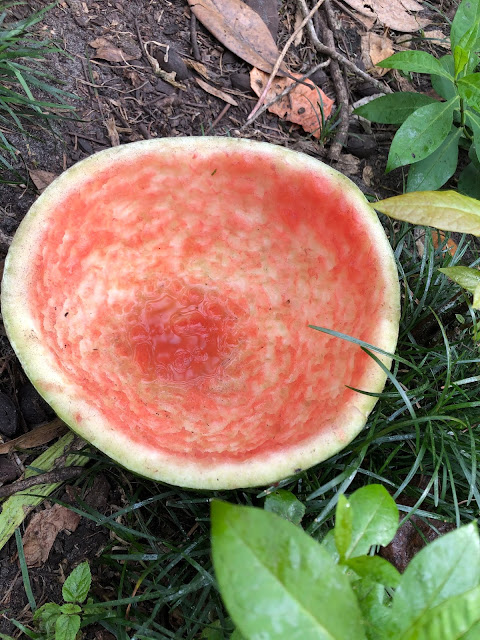 What chickens will do with watermelon.
I think I may be a little sore tomorrow. That's okay. It's supposed to rain and I'll have a good excuse to stay inside. But I'm mighty glad I got outside today and used my body and created a small bit of order in a large area of chaos.
I think I will sleep well on those line-dried sheets tonight.
The church folks are gathering next door.
Time for a martini.
Happy Friday, y'all.
Love...Ms. Moon
Posted by Ms. Moon at 6:35 PM