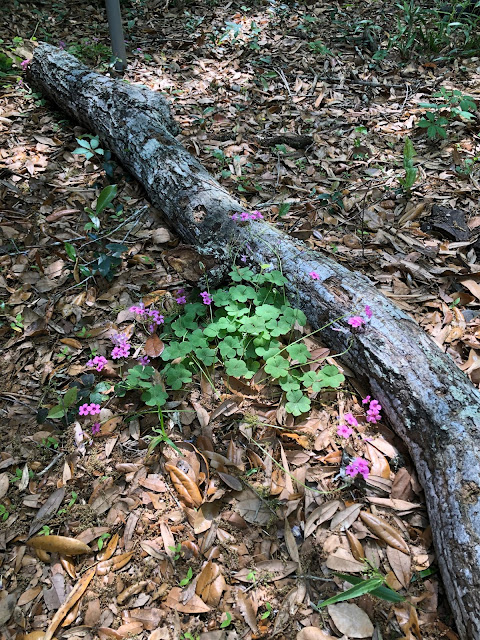 A little oxalis over by the old barn. We never go back there but today Mr. Moon and August and Levon and I were kicking bamboo and Glen wanted to show me where a huge branch had fallen onto the barn which is going to lead to more roof repairs.
Ay.
We could just let the old building do the inevitable and slowly and surely fall in on itself but we don't want to do that. It's a very cool space and although we don't use it for anything but some random storage, if we ever go to sell it's sort of a quirky cool thing on the property that people can look at and dream about what they could make it into.
We certainly did. But there's no water or electricity to it so for now, it stands where it is, still straight in its bones. Although we call it the old barn, I'm not sure it ever was. Maybe. But the floor isn't on the ground- there are a few steps up to it, and barns are not built that way. Horses and cows aren't very good at steps, you know. There's a loft which is now dangerous and just a very large room downstairs.
But yes, a huge branch fell on it recently and it's going to let in water which will lead to its downfall whether we want it to or not. And so...repairs will be done.

Vergil has been working around the clock, almost, and Jessie hasn't had time to do her shopping so I offered for the boys to come over here today and she gratefully accepted. When they got here, August actually stopped at the doorway to the kitchen were I stood and hugged me and said, "I love you Mer," and then went directly to his grandfather.
"Did you tell him to do that?" I asked Jessie.
"Well..." Yes. She had, in a way, telling her sons that when they rush right past me to find Boppy that it can make me feel bad and so what could they do to make me feel loved? And that was what August did and it was so sweet. Levon, of course, didn't hesitate for a second but went straight for his grandfather who was sitting at the kitchen island, eating his cereal and playing poker on his phone. Within a minute this is what was going on. 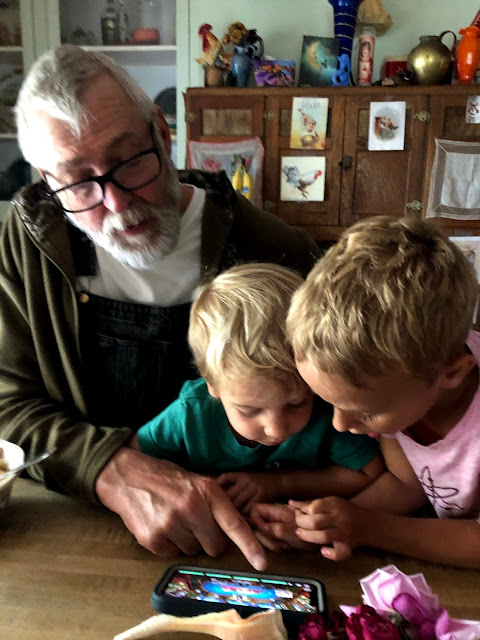 Somebody has to teach them how to play poker, right?
And then they all watched a little TV and next they helped Boppy get his supplies and tools ready to start the shelves for the pantry/storage area. Somewhere in the midst of all of this we kicked bamboo. 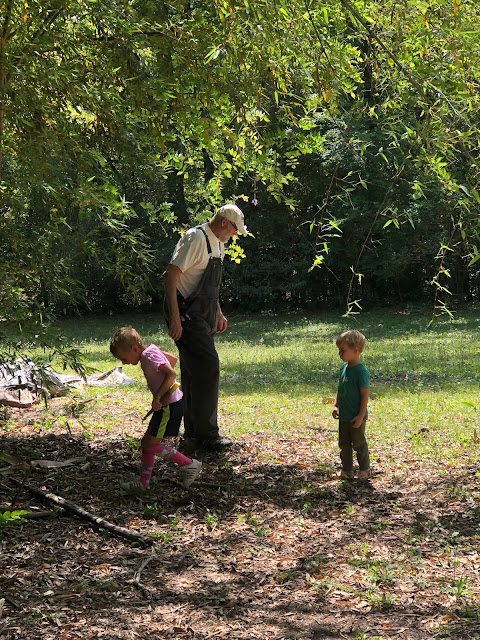 Both boys are already pros. It's a strangely satisfying activity. When we got around to the front yard, I said to August, "Can you find my baby buck-eye?" And he did. He listens. He learns. Earlier on I'd told the boys something, I can't remember what, and had said, "Did you know that?" August said, "Yes. I did."
"Where did you learn it?" I asked him.
"Oh, just in some book about smart things." He said this in such an offhand, airy manner that I had a hard time not laughing out loud but I would never insult him in that way.
There was some make-up playing. They got some eye shadow and August asked for stripes on his face and they both applied powder and blush to their faces although not in the traditional places. I kept warning them not to make a mess, especially with my powdered eyeshadow and then of course, I tipped it over onto my own leg.
Sigh.
But we were on the swing porch so it didn't matter too much. And the stuff has to be twenty years old and I need badly to throw it away. So no harm done.
There was spaghetti for lunch and August proclaimed, "Who doesn't like pasta?" which is sort of a universal truth.
I also introduced the boys to B.B. King via a few videos and told them a little about Mr. King's life and what an amazing and kind man he'd been and what a good musician. About how I'd gotten to shake his hand a few times and how much I loved him.
A little more Richard Scarry was read and then Mama came while we were playing Monument Valley on my phone which is a very slow and innocent game, no fighting or dying. I sometimes let them play it and we all enjoy working together to try and get the princess to where she needs to go. But August must have been tired or perhaps video games are absolutely blatantly evil and when he and Levon started fighting over who was going to control things and I took the phone away, he cried which he almost NEVER does here, and if he does, always when he's about to leave.
So he was in a mood when they left and proclaimed that he was never coming back because it's boring here and I just laughed and said, "Well, I'll be so sorry if you never come back," and Jessie said, "Oh, we will be coming back." I told Jessie that I had told August and Levon about B.B. King and Jessie said, "That's great!" and August said, "He's the worst singer in the world."
Five years old and he knows exactly where to aim the arrows at my heart. But they are candy arrows and he knows he can say anything to me and that I will still love him. So in a way, these things are the hugest honor.
I gave them all a Dove chocolate and off they went.
It was a good day.
I have pinto beans on the stove cooking with Easter ham and there is plenty of last night's spinach pie to have again tonight. I'll make a cornbread, maybe a salad. Mr. Moon is getting all of his ducks in a row in my pantry and I know it is a labor of love. As much as we have talked about doing this particular project, I am still having a hard time believing it's going to happen. But it quite obviously is.
I am so excited.
Dreams can come true. They can happen to you.
Love...Ms. Moon
Posted by Ms. Moon at 6:11 PM