Kitchen Work With A Good Book In My Ears: Heaven 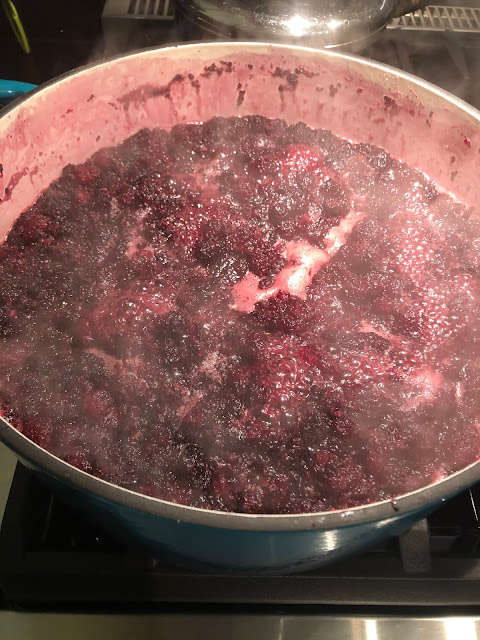 So I decided to try out my foot today and take a little walk. It's been forever since I crippled myself and although I can't say the foot feels 100% okay, it's a whole lot better. So I put on my shorts and walking shirt and bra-like garment, grabbed my walking stick and struck out for the wild beyond.
Not really. Only down the sidewalk.
Not a whole lot has changed in Lloyd if you want to know the truth. Different things are blooming and there is more green than the last time I walked and oh yeah- the burnt remains of the house that burned down looks to have been cleared away. I wonder if the owner is going to try to put something else up there. I don't see how that would be possible. It looked hardly habitable when it was standing and no one would have insured the place. But you never know, I guess. Meanwhile, an RV is in the yard and I suppose that's where the owner is living now. Buddha's still sitting out front, keeping watch, looking placid.

When I got back I decided to make my jam. I dragged out the canning kettle and filled it and put jars in and set it to boil. I went over my mulberries, one by one, looking for stems I may have missed. I measured them out into my biggest pot that isn't a stockpot and estimated by reading recipes how much sugar I'd need. I had about twelve cups of berries, or maybe thirteen, and used six cups of sugar.
Y'all- jam is not good for us. That's all there is to it. Except for the fiber you might as well just pour pure high-fructose corn syrup over your biscuits.
I'd read that mulberries are almost devoid of pectin which is the substance in fruit that causes jams and jellies to thicken and I'd bought one box of Certo which is powdered pectin. After I boiled and mashed my berries with the sugar for a good while, I added the Certo, and then ladled the resulting sweet, deep purple concoction into my sterile jars, capped them, put them back in the canner and boiled them for ten minutes, took them out and they looked like this. 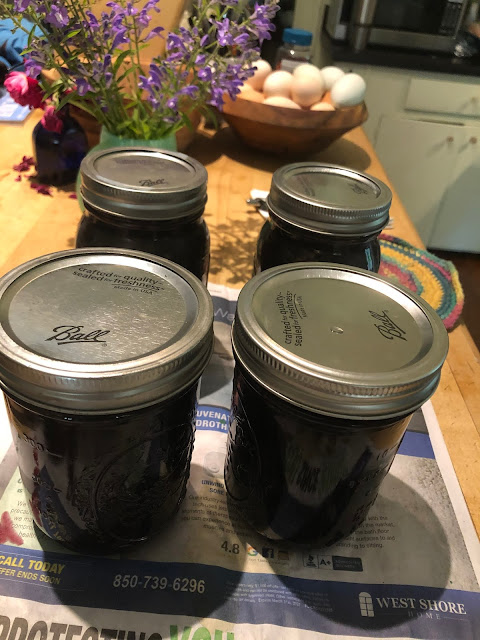 Not a very good picture. That could be four jars of diesel oil for all you can tell. I actually got almost another whole pint but just put it in the refrigerator and didn't can it. It tastes delicious and I guess all of that picking and plucking of stems and the sugar that went into it was worth it. I'm waiting to see if it's going to thicken up or not. I think I could have boiled it from now until the Rapture and it wouldn't have gotten jammy and I really have no idea if I used nearly enough pectin.
Anyway, that took me most of the day which is a little sad. And here's something that's even sadder- I realize that I left no space in my pantry for jars of my canned goods. And I do have room in the cabinets for some jars but dammit- I want to see my lovely jars of summer bounty in my lovely green pantry! I'm going to have to rearrange, change, and figure this out. The garden is looking so fine right now that there is the prospect of plenty of pickles to come. Cucumbers, green beans, okra- I'll want to pickle them all!
First world problem.
While I was in the kitchen I mixed up the dough for a loaf of sourdough and put it in the refrigerator. I'll take it out tonight before I go to bed to start its rise. I also started a pot of the heavenly creamy cashew butternut squash and sweet potato soup that I love so much. It's simmering on low right now. AND, because why not? I made up the dough for a few naan breads to go with the soup.
I finished listening to This Is How It Always Is while I walked and worked in the kitchen. I love it even more now than I did yesterday. It is a truly precious book. In many ways, it is an idealistic view of a family helping and supporting a child figure out who they really are, doing whatever they can to ensure their child's health and happiness. There were counselors who were so amazingly helpful and wise. There was the fact that the mother was a doctor, the father a writer who loved and accepted each other in their slightly non-traditional roles as bread-winners, as parents, as householders. There was a grandmother who was as loving and supportive and salty as a grandmother could and should be. And there was a trip to Thailand where differing gender roles are accepted as a part of life, where Buddhism gently offers the perspective that we live many lives in many different bodies and that trying to define a person binarily is useless and probably absurd.
But is there anything wrong with a story that presents an almost ideal situation for us all to aspire to? Nothing is presented as easy. In fact, "easy" is often referred to as something which is off the table.
I loved it. It's given me a lot to ponder. It's given me new perspectives which is saying a lot for a woman who has a transgendered child, another child in a same-sex relationship, and who knows and loves quite a few people who are definitely not cis-gendered in any way. And as I said yesterday, it is beautifully written.
Levon is back to normal, I think. He still had a little fever last night but woke up without one today. He never did complain of ear pain and so Jessie never gave him the antibiotics which the Urgent Care doctor had prescribed. Who knows what was really going on? Children are so mysterious when it comes to fevers. And as pathetic and sad as they seem when one overtakes them, they are so obviously sturdy and resilient when it comes to getting over them.
Thank the gods.
Love...Ms. Moon
Posted by Ms. Moon at 6:41 PM